The upcoming Royal Enfield Himalayan adventure tourer motorcycle will be powered by a 410cc, single-cylinder oil-cooled powerplant and will be launched at the 2015 Auto Expo for around Rs 1.7 lakh ex-showroom 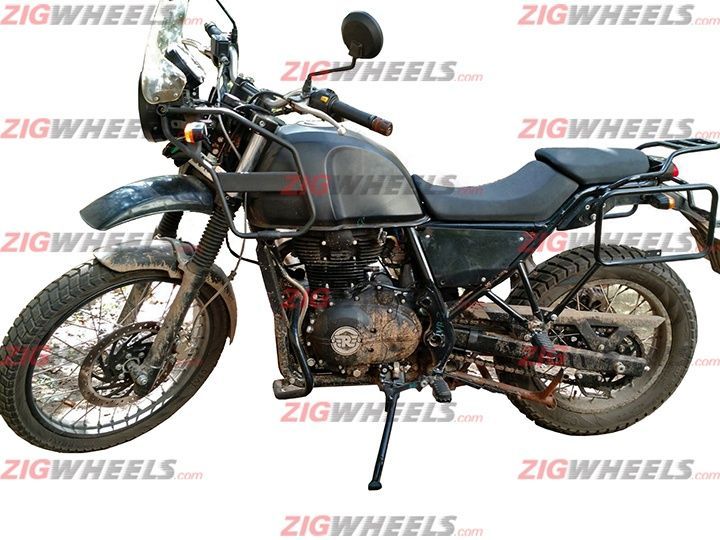 The engine is expected to produce around 28PS of power and 32Nm of torque and will be mated to a 5-speed gearbox. . The motor will also have overhead cams instead of the traditional push rod architecture on Royal Enfield engines and is expected to freely rev to 6,500-7,000rpm. The engine will also be equipped with a counter balancer to reduce vibrations, so expect the Himalayan’s mill to be the most refined unit seen on a Royal Enfield yet. We have also received a clear shot of the comprehensive instrument cluster of the Royal Enfield Himalayan consisting of analogue speedometer, tachometer, digital display for clock, odometer and trip meter along with compass and even altimeter readings. Braking on the Himalayan will be done by disc brake on both the ends while ABS wouldn’t be offered even as an optional extra.

But our sources say that ABS will be offered on the Royal Enfield adventure tourer by 2017. The new Royal Enfield motorcycle will feature Ceat tyres as stock tyres while Pirelli tyres would be an optional extra. A range of add-on accessories are also expected, like hard luggage, hand guards, crash protection bars and high windscreen. The Royal Enfield Himalayan is likely to be priced around Rs 1.70 lakh ex-showroom. It is also rumoured that Royal Enfield has a huge surprise in store for us at the 2015 Auto Expo which we feel most likely be its twin-cylinder concept motorcycle.