In addition to sub-4m SUVs, the Kiger’s pricing puts it in contention with premium hatchbacks and sub-4m sedans 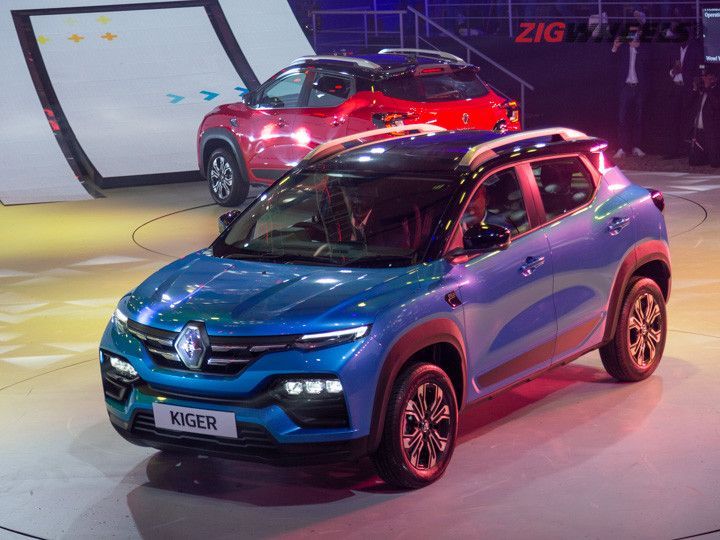 Renault has launched its debut sub-4m SUV, the Kiger. It is based on Renault-Nissan’s CMF-A+ platform, just like the Nissan Magnite. The petrol-only offering, like its Nissan sibling, is aggressively priced, undercutting all of its competitors. Introductory prices range from Rs 5.45 lakh to Rs 9.55 lakh, putting it in contention with not just sub-4m SUVs but premium hatchback Cars and sub-4m sedans. What can you get for the price of the Kiger? Take a look.

The Magnite, too, is competitively priced, undercutting most of the segment by a decent margin. For a similar price as that of the Kiger, you get the same choice of powertrains and almost identical features. The Magnite joins the Kiger as one of the few models in the segment to not offer a diesel engine. Instead, it gets two petrol options, along with a 5-speed manual and CVT. It does miss out on the AMT option, though, which is provided in the Kiger.

One of the segment’s heavyweights, the Kia Sonet has been the sub-4m SUV to beat since its launch. It is the most feature-loaded in this space and the only one to offer front ventilated seats and the bigger 10.25-inch touchscreen. That’s not all; the Sonet gets a choice of three engines and different transmissions to choose from. Enough reason to pick this over the Kiger?

Another heavyweight from the segment, Hyundai’s sub-4m SUV is to the Kia Sonet what the Magnite is to the Kiger. It is built on the same platform, offers similar features, and provides a range of engines and transmission options, except for the Sonet’s class-exclusive diesel-torque converter automatic combination. The Venue was the first car in its segment to offer connected car tech with features like remote engine start-stop and cabin pre-cool.

Mahindra’s sub-4m SUV has garnered accolades, making it the one to beat in the segment. It boasts the highest score by any India-spec car in the GNCAP crash test. This sub-4m gets a host of safety features, including up to seven airbags, and packs a decent amount of creature comforts like dual-zone AC and BlueSense Plus connected technology. With an output of 200Nm, its 1.2-litre petrol engine is the torquiest in the segment.

The Nexon may not be as fancy, but it does its job; keeping you safe with a 5-star Global NCAP crash-test-safety rating. It comes with turbo petrol and a diesel engine option, paired with a cost-effective AMT. Moreover, the Nexon is the only SUV in the segment to offer an electric drivetrain option. In fact, it is the only car in India to offer petrol, diesel, and electric drivetrain options.

The Vitara Brezza gives you everything that you need from a car, without the nonsense. It lives up to the usual expectations we’ve come to associate with Maruti, with success attributed mainly to its reliability. In fact, Toyota also sells a rebadged version of the same as the Urban Cruiser.

One of the oldest models in the segment, the Vitara Brezza has sold more than 5 lakh units since its 2016 launch. This sub-4m is provided with Maruti’s 12V mild-hybrid system, which gets functions such as start-stop and torque-boost assist.

The second Maruti to feature in this list, the Dzire is the top-selling sub-4m sedan priced much like the Kiger. It offers decent features and could make it to your list if you’re open to buying a sedan.

The Amaze might be a sub-4m sedan, but it is almost as roomy as a sub-4m SUV. Its 420-litre boot space bests that of the Kiger (405 litres). Both its petrol and diesel engines come with a CVT option, making the Amaze a convincing alternative that ticks almost all the boxes.

The Altroz gets the looks and the feel without compromising on safety. One of the safest cars on sale in India right now (with a 5-star global NCAP crash-test rating), the Altroz is the perfect choice for someone who wants an affordable yet premium experience. The recently launched turbo-petrol and automatic variants add more zest and oomph to match the sub-4m SUVs' turbo-petrol engines.

The latest iteration of the i20 brings with it an uber-premium feel. However, it could just burn a big hole in your pocket. That said, would you care much for a few extra bucks over the Magnite if there’s a turbo-petrol engine on offer and features loaded to the gills?

The final Maruti to feature on our list, the Baleno is practical, reliable, and backed by a robust after-sales network. Much like the Vitara Brezza, the Baleno gets Maruti’s 12V mild-hybrid system, which provides torque-boost assist and start-stop functionality. Indeed, the Baleno is a decent premium hatchback Car and affordable too, making it a worthy alternative to the Kiger.