Here’s How A Car Comes To Life 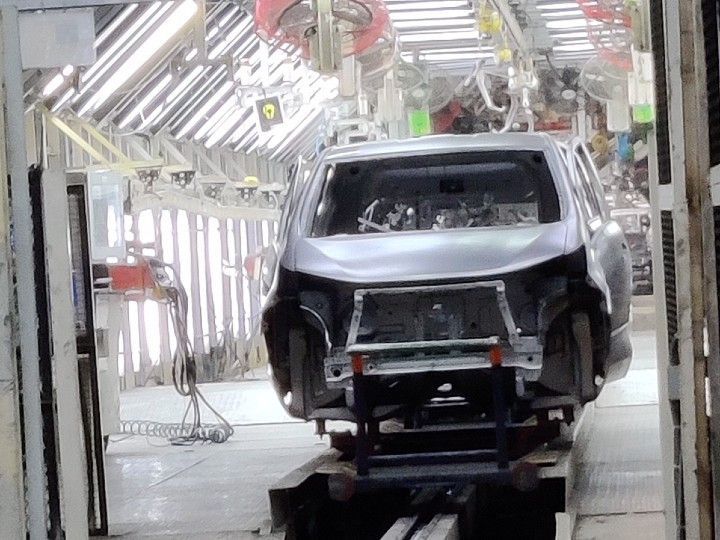 Nissan India has been on quite a roll in recent times, especially with its latest offering, the Magnite sub-4 metre SUV. It's equipped with various features and offered at competitive prices from Rs 5.49 lakh (ex-showroom). Besides, it’s already garnered over 32,800 bookings since its launch in December 2020. But have you ever wondered what goes into the making of a sub-4metre SUV?

We already know after a new model’s design is approved, the next step in its creation is production. Nissan India had us over at the RNAIPL plant in Oragadam, near Chennai, to take a look at the various processes. It’s also where its counterpart, the Renault Kiger, as well as the Duster, Kwid, Triber, and the Datsun Go, Go+ and Redi Go are produced.

The first process in manufacturing a new model is stamping, also called pressing. Essentially, in the stamping shop, sheets of metal are stamped into the desired parts of the car.

Nissan has three press machines in its arsenal, with the first one being a 2,800 press unit modified with robot arms. The other two are 5,400-ton press machines.

After the stamping process, the parts are inspected and sent to the body shop where the car starts taking shape.

Here all the stamped out parts and other bits are installed into the car’s body shell. Nissan has three lines for this process, with the first one being fully automated. The second line utilises 41 percent automation, whereas the third one is manually operated.

The metal sheets are put together via a process in which a robot is integrated with a roller hemming head to fold a sheet onto itself or onto another sheet.

Unfortunately, we weren’t allowed in the paint shop since it’s confidential information. But as the name suggests, the body of the new model is painted according to the colour required. In the case of the Magnite, the sub-4 metre SUV is offered in three dual-tone and five montone body shades.

Before everything goes together, how can we forget the heart of a new vehicle? It’s the powertrain of course. In the powertrain shop, one section handles engine assembly, including tests such as liquid check and the performance of each cylinder.

The second section handles gear assembly and the machining of key parts such as the cylinder and camshaft. Once the engine is assembled, Nissan puts it through various quality tests including a camera robot inspection.

This is where all the pieces of the puzzle are finally put together. The process starts with the underbody of the car being prepped with parts such as the engine and exhaust.

After that, the underbody travels to a parallel run assembly line, where the body, the engine, and the suspension are finally paired up.

Next, the new model sees the installation of doors, interior trims, and variant-specific bits. It’s also where the car is finally put on its own wheels for the first time.

After the model is finally, it is transported to the inspection area where final checks are made and any minor problems are fixed. After that, it is pretty much the finish line and a new car is ready for delivery.

Fun fact, every week, Nissan selects random Magnite units and puts them through a water wading test to ensure there isn’t any unwanted water seeping into the car. They’re also put through a few more checks at Nissan’s test track in the facility.

Now that a new model is complete, here’s more about the home of these new models, the RNAIPL plant in Oragadam, Chennai. Opened in March 2010, the plant covers 640 acres of land and has an additional 158 acres for suppliers. The plant has seen a total investment worth Rs 61 billion, with 2.1 million vehicles rolled out of the plant.

Overall, there’s a lot that goes on behind the scenes in the making of models such as the Nissan Magnite as well as any potential future models such as possibly a facelifted Kicks or even a Renault entry-level EV (probably based on the next-gen Kwid) by 2022.