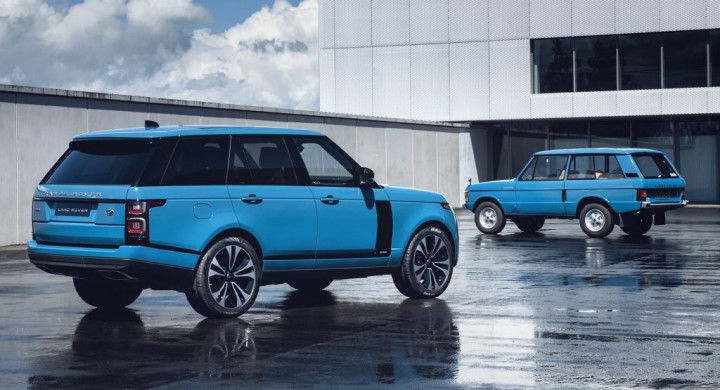 Land Rover redefined the luxury 4x4 segment with the introduction of the Range Rover brand on June 17, 1970. Over half a century, Range Rover has broken barriers to produce some of the most exquisite SUVs. In celebration of 50 years of existence, the brand will offer a limited-edition model based on the Autobiography, dubbed the Range Rover Fifty.

The Range Rover Fifty will host a range of powertrain options, such as a petrol, diesel, and a plug-in hybrid P400e version. It will be available in both standard and long-wheelbase body styles. With its clamshell bonnet, distinctive floating roof, split tailgate, and trademark front fender vents, the Range Rover of today can still trace its roots back to the 1970 original. In its golden anniversary year, it is now the most efficient, connected, luxurious, and capable yet.

Time to take a walk down memory lane….

Over its lifespan, the Range Rover brand has set a lot of benchmarks, with over a million sales to back it. The Range Rover Classic, the first diesel-powered Range Rover, marked the beginning of a legacy that is now cemented in stone.

The first-generation Range Rover lasted about 26 years, followed by the P38A featuring design cues that can be seen in Range Rovers even today. It also featured a blend of on-road comfort and off-roading capabilities. The P38A was the first Range Rover to feature a height-adjustable suspension and V8 petrol engines which broke the barriers of performance for its time.

Lasting from 2001 to 2012, the third generation models saw the 4x4 ladder frame body replaced by a stiffer monocoque body (more road-friendly) and a fully independent suspension, unlike the generic rigid axle. The luxurious interiors were inspired by symbols of premium travel such as yachts, first-class airplane seats, and fine furniture.

With its transition to the fourth generation in 2012, Range Rover saw the introduction of an all-aluminium construction which provided a weight reduction of 420 kg, plug-in hybrid technology, and a bunch of tech-driven features and driving aids. Topping the list of today’s Range Rover offerings is the SVAutobiography which features powerful V8 engines and top-of-the-line luxury.

The Range Rover brand has, over the past 50 years, broken barriers and set benchmarks for luxury SUVs. With that, the Range Rover Fifty is surely more than just a limited edition special offering. It is a mark of history, a milestone of sorts. A reminder of the past and a sign of what is to come.