The GLC will be offered with a choice of either a petrol or diesel motor, both mated to a 9-speed automatic transmission 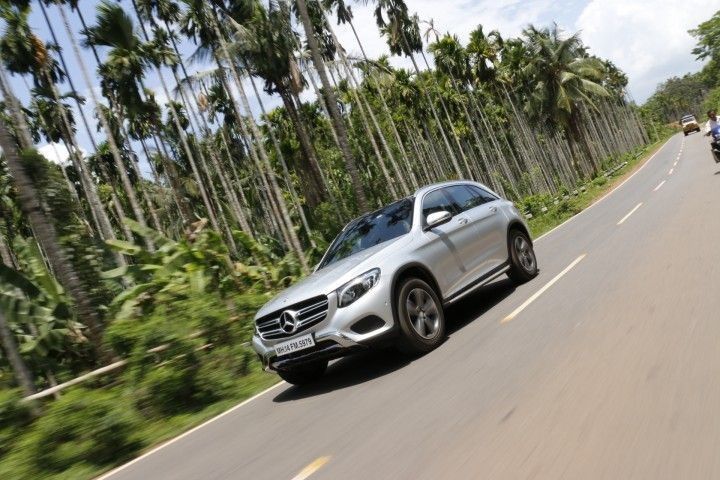 Mercedes will continue its launch spree with its medium-sized luxury SUV, the GLC. Slated to be launched on June 2, the car will sit against the likes of the BMW X3, the Audi Q5, and the Land Rover Discovery Sport. The car carries a fresh new look thanks to Merc’s current generation of design language.

Here are top five things to know about the GLC.

The GLC is based on Merc’s MRA (Modular Rear-wheel drive Architecture) platform, which essentially underpins all its cars with a rear-wheel drive setup. The same platform is also used to construct the C-Class, and the GLC is more or less a high riding extension of the C-Class. In fact, it is basically a C-Class which is stretched by 33mm (wheelbase), widened by 80mm, and its roofline raised by around 197mm. The MRA enables Mercedes to use its different components across both these cars.

As said before, the car carriers Merc’s latest design language encapsulating some of the characteristic elements like the twin-slat grille on the signature snout, topped off by the tri-star logo. The headlamps carry a lot of semblance to the C-Class’ setup so does the hood and the side profile, however, there’s a certain beefiness associated the GLC. This is because of the high roofline jutted with larger windows and less raked front windscreen. The GLC also gets all-around body cladding to add to its SUV looks, along with 18-inch wheels. However, another inch on the wheel size could have made the GLC look sportier. Moving to the rear, one can notice the sleek and wide all LED taillight units.

The interiors of the GLC are very luxurious and top notch, as one can expect from the German. Yes, they are a straight lift-off from the C-Class, but then the interiors of the C-Class are arguably the best-looking ones amongst its peers. Speaking of the GLC’s competition, it (2873mm) has the longest wheelbase in its segment; 66mm more than the Q5 (2807mm) and 63mm more than the X3 (2810mm) making it the most spacious of the lot. Coming to the features, the GLC gets a 7-inch infotainment system, integrated with the trademark COMAND system.

Our first drive of the GLC reveals that the rear passengers will have a lot of legroom along with headroom. The boot space stands at 550-litres, which can be extended to 1600-litres with the push of a button suitably placed in the boot compartment.

The GLC will be offered with two engine options, the 2.2-litre diesel oil burner, and a 2.0-litre petrol. The petrol certainly will largely benefit the NCR folks, who are deprived of over 2.0-litre diesel engines. Speaking of the figures, the diesel produces 172PS of power and 400Nm of peak torque. The petrol, on the other hand, produces a hefty 248PS of power and 370Nm of torque. Both the engines are mated to 9-speed G-Tronic transmission, which enables the diesel version to achieve 0-100kmph in 8.3 seconds, while the petrol will attain this in 6.3 seconds. No doubt both the engines are mated to an all-wheel-drive system.

The car could be priced in the ballpark of Rs 45 to Rs 55 lakh, as its competitors are priced in a similar price bracket. Do watch out for the prices as we bring you the latest launch updates.