Land Rover has launched the Discovery Sport as a replacement to the Freelander 2. So how good is the new and most affordable Land Rover available in India? 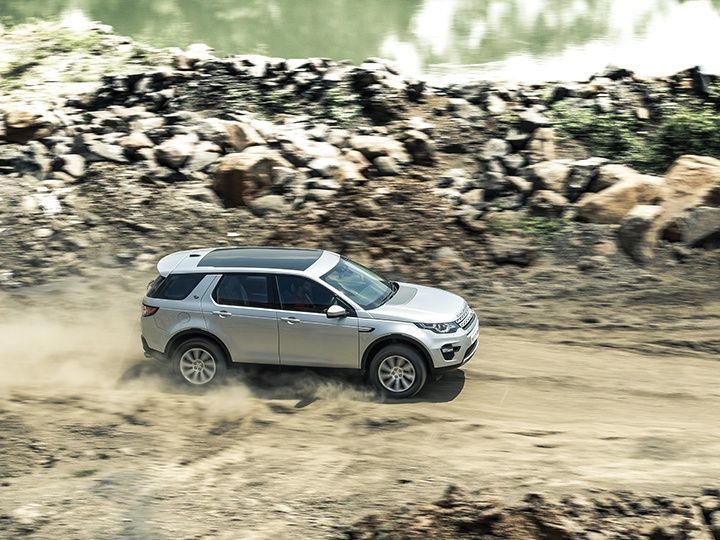 While the success of the Freelander 2 was overshadowed by the stylish Range Rover Evoque, there is no denying that the car offered a comfortable drive experience and was accompanied by great off-road capability. However, before Land Rover introduced the mildly refreshed Freelander 2, they had already started work on its replacement -the Land Rover Discovery Sport. And now that it is finally here, can it up the ante and set a new benchmark for the brand?

The Discovery Sport, unlike the Freelander 2 isn’t boxy, and that’s a welcome change. In fact, a quick glance at it is enough to figure that it draws some inspiration from the Range Rover Evoque. But amazingly, the Disco still manages make its own identity with its subtle design cues.

Look at the Discovery Sport from the front and it screams Land Rover. That smoothly carved out bonnet, and the honeycomb grille grill with the Discovery badge above it give it a clean look up front. And then adding a bit of spunk, there are those sweet looking circular daytime running lamps around the projector headlamps. We particularly liked the way the rear end coexists with the front thanks to certain elements in its design. The smoked tail lamp cluster too has circular LEDs and there's the all important Discovery badge above the registration plate. Although the oddball rear design doesn't look as evolved and butch as the front, the overall styling will surely grow on you over time.

Land Rover has brought in the Disovery Sport in two versions – a 5 seater and a 5+2. To make space for the extra row of seating, the Discovery Sport comes with space saver spare wheel which too has been pushed under placed underneath the SUV. Out test car was the more sensible 5 seater version, which comes with ample of leg and knee room, even for the passengers at the back. This is thanks to the flat floor seating. The seats although fairly supportive are a bit firm for our liking.

For the interior trim, Land Rover offers a lot of customisable options, the one we got our hands on was washed in black. Surprisingly though, the inside of the car didn’t feel claustrophobic and it is all thanks to the large windows. Bits of brushed aluminium finish around the air-con vents and the centre console give it a nice highlight. Although the dashboard won’t leave you mesmerised, it’s neatly laid out design is soothing to look at. Certain controls though are a bit oddly positioned, like the power window buttons and the controls for the electrically adjustable ORVMs. Quality of materials all round is top notch.

The centre console houses an 8-inch touchscreen infotainment system that is responsive to touch and comes with a navigation system. Weirdly the power button for the infotainment system is placed close to the climate control. The instrumentation is quite similar to the one on the Evoque and also shows information of the Terrain Management System.

For a car that costs over Rs 50 lakh, the Land Rover Discovery Sport is expected to come loaded with features and in that regard it doesn’t disappoint. The HSE TD4 model that we tested, gets 8-way electric front seats, front and rear parking aid, rear camera and park assist. For the convenience of passengers, the Discovery Sport comes with several USB and 12 volt charging points.

And then to make the off-roading task easier, Land Rover has also equipped it with all sorts of gizmos including the renowned Terrain Management System, Hill Descent Control, Electronic Traction Control, Roll Stability Control and the works. One thing that we would have loved to see was an openable Panoramic Sunroof instead of a fixed one.

The Discovery Sport’s 2.2-litre 4-cylinder mill is offered in two states of tune –   190PS/420Nm and 150PS/400Nm, and we drove the latter. The engine feels quite refined and the NVH levels are well within control. But the 150PS of power just isn’t enough to make the two tonne car surge ahead in eagerness. However, once up to speed, the Disco can comfortable cruise on highways without much fuss.

Things get slightly better for the car in the Sport mode, wherein it does feel a little more responsive to inputs. The 9-speed automatic transmission sourced from ZF shifts smoothly.  Even when you take matters in your own hands with the paddle shifters and the car shifts up fairly smoothly but isn’t as quick in its downshifts. Moreover, if you have experienced the dual clutch transmissions of the German rivals, this ZF won’t feel as crisp.

This is one area where the Discovery Sport really shines. The firmly setup suspension ensures that the Discovery Sport takes on corners with utmost poise. There is a bit of body roll as expected from an SUV of this size, but that doesn’t take away from the overall confidence. A lot of this character comes thanks to the well weighted steering wheel that offers ample of feedback. Like most cars that come out of the Land Rover stable, the Discovery Sport too is quite an able off-road machine. The Terrain Management System with its Snow/Grass, Sand and Rocky modes makes easy work of any sport of terrain. Good approach and departure angles further aid the cause.

Braking responsibilities are handled by disc brakes on all four corners. Its progressive nature makes it amply comfortable to drive in the traffic. Even of you have to slam the brake hard and the car stays under control without losing its line.

Ride and Ease of Driving: rating_3.5_rating

While the stiff suspension sure gives the Land Rover Discovery Sport impressive handling dynamics, this same attribute makes it a bit harsh on rough road conditions. While the smaller undulations do get absorbed, it is the larger bumps that might be a cause of concern, especially for the passengers at the back. In the city, the car is absolutely comfortable to drive. Visibility all round is good and to make the parking affair easier there is parking assist too. For those frequent travellers, who love to carry their world with them, there is ample of space in the boot too.

The Land Rover Discovery Sport returns a claimed efficiency of 12.63kmpl. Surprisingly though, the 5+2 seat version with this same engine option returns a slightly better 12.81kmpl.

The Discovery Sport starts at Rs 46.1 lakh, but the TD4 HSE variant of the car that we drove costs Rs 53.34 lakh. If you want to opt for the higher powered SD4 HSE Luxury variant you will have to shell out Rs 60.70 lakh (5-seater). All prices ex-showroom Mumbai.

Should you buy one then? The biggest draw is clearly the prestigious Land Rover badge. And then, there are a lot of options available in the market at that price point including its cousin – the Range Rover Evoque. Moreover when you consider the fact that its arch rivals offer a more powerful motor, then things get slightly more difficult. But then if you want a car that looks good, handles well, is practical and most importantly can take the road unexplored without breaking a sweat then the Land Rover Discovery Sport surely should be on your list.