We get our hands on the highly anticipated Mercedes-Benz GLC SUV. Read on to know what it is all about. 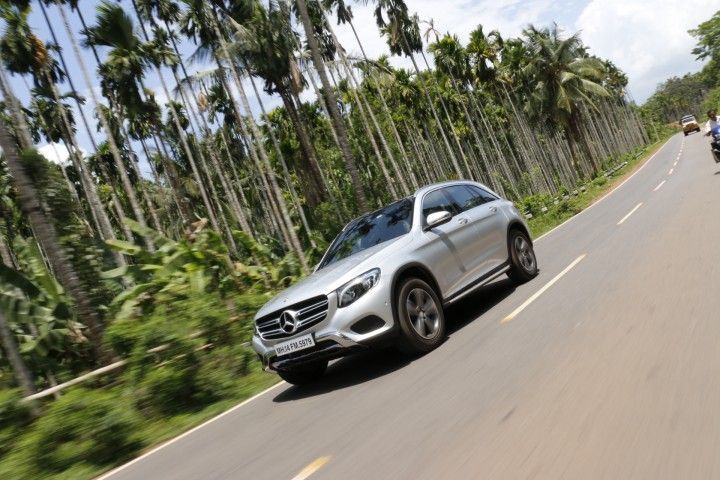 Mercedes-Benz has one of the most extensive and exhaustive vehicle portfolios when it comes to a luxury brand. There is barely a body style in the country that doesn’t adorn the coveted Tristar emblem on its front grille. The one segment that was yet lacking a Mercedes was the mid-size luxury segment, the segment dominated by Audi’s Q5 and BMW’s X3. But today things have changed and it looks like for the better. Today we get our hands on the new Mercedes GLC and by the looks of it, the competition just went up a notch.

There is no denying that a modern day Mercedes has the looks even Miranda Kerr would be envious of and the GLC is no exception. It looks smart and fresh with its thick twin slat front grille which flows into the big tristar logo. The grille flanked by typical swept back Mercedes all LED headlamps featuring Intelligent Light System. The bonnet is well contoured and looks muscular, same is the case with the side which features a prominent shoulder line running all the way from the front fender almost till the C pillar. The rear too looks smart with its fresh all LED tail lamps and the car sits on 18-inch wheels adorning 235 section Pirelli Scorpion dual purpose tyres (Edition1 only).

As the name suggests the GLC is based on the C-Class sedan. Compared to its main rivals, the Q5 and the X3, the GLC is only 1mm shorter than the X3 and but is 27mm longer than the Q5. It also boasts of the longest wheelbase at 2873mm compared to 2807mm on the Audi and 2810mm on the X3. This translates into a much roomier cabin. The cabin is as you would expect from a Mercedes and has a prominent echo of the C-class sedan. There is liberal use of leather and other fine materials like wood and the overall material quality is quite high, even when compared to its rivals. The clocks are a familiar sight, so is the stand-alone 7-inch infotainment screen and the Merc trademark COMAND system is in place as well. The silver accented power window buttons and the front seat adjustment controls are also reminiscent of the C-Class sedan.

The cabin is spacious and ergonomically sound. The seating position is high and the visibility is quite good all-round barring the typical Merc ORVMs which have a relatively narrow field of vision. The seats too are comfortable and envelope you well and there is no dearth of thigh support either thanks to the adjustable seat squabs up front. Also, this being the Edition1, it also comes with electrically adjustable front seats with memory function. So in case you forget your favourite ‘position’, it remembers it for you. The rear bench too is a nice place to be in and even with taller and generously proportioned occupants up front, it has enough space left over for your Pug.

Seating three though is a challenge owing to the high transmission tunnel. Though two can be seated in utmost comfort. There is ample headroom and the seats provide good back and thigh support. The rear bench also comes with its own climate control zone to ensure no one fights over the position of the AC vents. If you have a German Shepard or two they will be perfectly comfortable in the massive 550-litre boot which can be increased to 1,600 litres if you put the 40/20/40 split rear seats down. The split seats can be folded by simple toggle switches placed in the boot as well as on either side of the rear bench.

The GLC will be available with two engine options, the no-points-for-guessing 2.2-litre 4-cylinder diesel engine and quite surprisingly, a 2.0-litre 4-cylinder petrol engine as well. The diesel makes 170PS of max power and 400Nm of peak torque. The petrol engine on the other hand makes 245Ps of max power and a slightly less peak torque of 370Nm. Both engines are mated to a brand new 9-speed GTronic transmission which comes with paddle-shifters on the steering-wheel to aid spirited driving, nice! Now compared to its rivals, the GLC is the only one that comes with a petrol option. Both, the X3 and the Q5 are available in diesel trims only. Though BMW does offer the more powerful xDrive 30d variant on the X3 but the Audi is only available in one trim, the 30 TDI.

Now we got to drive both the versions and though we would’ve personally picked the petrol and would love to tell you about that in detail, we are not allowed to take sides (though we just did) and are obligated to elaborate on both versions equally.

The petrol engine feels is smooth as a baby’s buttocks and barely makes a sound as it idles close 1,000rpm. On the move too you can barely hear it until you cross the 3,000rpm mark and it really starts to sing when you hit the powerband near 5,000rpm. But you don’t need to rev it that high to go fast for the biggest plus point of the GLC is its strong mid-range torque which is available from as low as 1,600 rpm. But if you enjoy a good exhaust note take it near its powerband and as the power kicks in you feel an additional jolt (though relatively gentle) of power and the GLC darts forward with renewed purpose. The GLC comes with five different driving modes namely Eco, Comfort, Sport, Sport+ and Individual. In Comfort and Eco modes the car is in its most relaxed setting.

The steering is extremely light, the throttle response too is relaxed and so are the gear changes. The ride too is pliant and extremely forgiving. Undulations pose little problem for the SUV as rarely anything is transferred to the cabin. But the small ridged speed breakers on the roads of Coorg did send a few shudders through the car if taken anywhere over 10kmph. Shift into Sport mode and the throttle response becomes sharper, the steering weighs up though there is very little change in the suspension stiffness or ride quality. But that doesn’t mean that the GLC can’t handle. It feels light on its feet and accelerates without hesitation. It isn’t flat through the corners but yet the body roll is kept in check.

Even on the winding and twisting roads of Coorg we felt the understeer despite permanent all-wheel drive was suppressed to a great degree. Even frequent and sudden changes in direction seldom upset the car. Sport+ further enhances the throttle response and the steering but the ride still remains kids-sleeping-peacefully-in-the-back pliant. The 9-speed GTronic transmission though works best when left to its own devices. Upshifts are quick and responsive but it shakes its head every time you want to downshift for heavy engine braking. The brakes too work well but lack in feel. The grip from the Pirelli Scorpions is phenomenal and the car sticks to the corner lines like Velcro.

The diesel engine on the other hand too barely makes a sound as it stirs from its slumber. The petrol engine is even quieter. Going of the line is as easy as blinking and the car tends to take off effortlessly thanks to the diesel engine’s strong mid-range torque. The engine feels refined and the high NVH levels ensure there is little engine clatter seeping into the cabin. On the move the 220d feels planted and offers a pliant ride. It even responds well when you start driving enthusiastically. Although, the front feels heavier compared to the petrol and it doesn’t feel as light to flick into the corners as its petrol counterpart. But having said that, the front also feels more planted owing to the near 100kg of extra weight over the GLC 300 variant.

What really sets the GLC apart from the rest its capability off the road. Where most luxury SUVs tend to lift their long skirts every time they come across a puddle or a dirt track, the GLC claims that it can plow straight through most of it. With the approach and departure angles of 30.8degrees and 24.8degrees coupled with an off-road suspension and higher ground clearance we do not doubt that claim especially taking into account that the Edition1 comes with Off-road engineering package as standard. It features three off-road driving modes, off-road, incline and slippery. It also comes with special settings for the ABS, ESP and ETS configured to tackle off-road terrain. Plus, the GEMTEX underbody protection ensures everything (read sump) stays intact even if you do overcook your off-roading maneuver a little. Though we would’ve loved to see a live demo of it all but our tight schedule ensured that we didn’t.

The GLC is that rare SUV that perfectly blends style, comfort, luxury, drivability and off-road capability (something that seems to have gone missing in modern day SUVs). Even though we wouldn’t call it an ‘exciting’ car, it is very well packaged and built to be an all-rounder, something it does phenomenally well. When launched on the 2nd of June will potentially be a thorn in its rivals’ sides especially if priced competitively, we suspect about Rs 50-55 lakh.