What Has Honda Changed On The New Unicorn BS6?

Comparing the three different iterations of the Unicorn 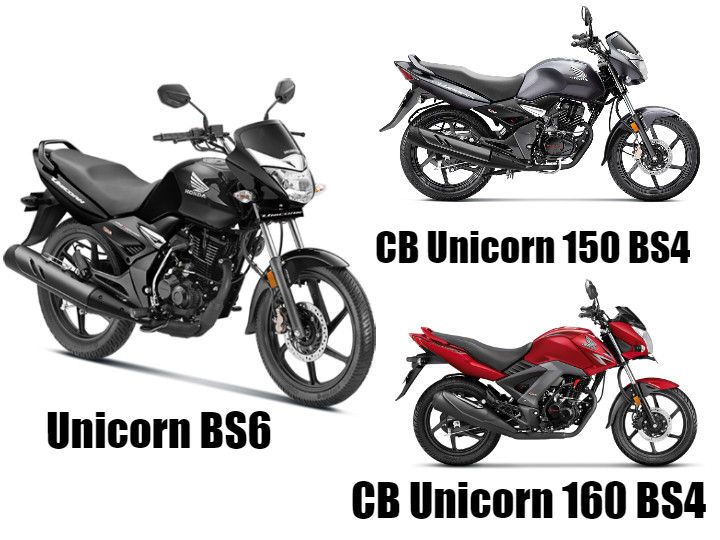 Up until now, Honda’s BS6 line-up focused primarily on the lower end of the spectrum, as it managed to launch 5 small capacity BS6 models -- the Activa 125 BS6, the Activa 6G, the Shine 125 BS6, the SP 125 and the Dio BS6. With the commuters nearly out of the way, Honda has now updated the legendary Unicorn. But instead of continuing with the creamy 150cc engine, the Unicorn will once again arrive with the 160cc motor. Know all the differences here:

Honda had not updated the old CB Unicorn 160 last year when the mandatory ABS norms had kicked in. A logical move considering that the Japanese brand had to bring back the old 150cc engine that Indians had grown fond of. But it seems that Honda could not carry forward the much loved motor into the BS6 era.

Now, the 162.71cc single-cylinder motor comes with fuel injection and a chunky cat-con. The BS6-compliant Unicorn makes 12.92PS and 14Nm. Compared to the old Unicorn 160, the power has gone down by 1.2PS while torque has marginally gone up by 0.1Nm. But if you consider the 150cc Unicorn, the power rating remains the same while peak torque is higher by 1.2Nm.

Longer seat but no change in wheelbase
Honda has tried to make the new Unicorn a more spacious motorcycle. The seat is now longer by 24mm, but an inch extra might not make a world of a difference. The wheelbase remains the same as the old 150, remaining a stable bike to ride.

Light but not as much as the old 160
The old 150 Unicorn weighed 146kg while its 160 counterpart was 10kg lighter. This new BS6 bike gets fuel-injection and single-channel ABS, which was absent on the old 160. This has bumped up the kerb weight of the bike to 140kg, 4kg more than the old 160.

Single-channel ABS, finally!
Honda refrained from kitting the Unicorn 160 with an ABS unit. Now, this new bike finally gets single-channel ABS. While it is a mandatory feature, we hope motorcycle manufacturers skip exploiting this grey area in the law and give dual-channel ABS across the board.
Was this article helpful Yes No
Sorry about that