Expected to be launched internationally towards the end of 2019, will it come to India? 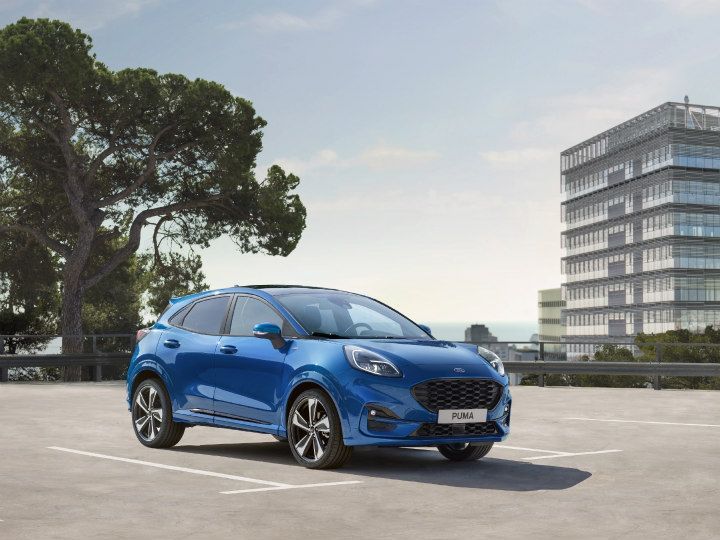 During the 1990s, the Ford Puma made a name for itself in Europe as a small front-wheel drive coupe that was fun to drive. However, it had a relatively short production run of 133,000 units built over 5 years in production from 1997 to 2002. Fast forward 17 years and Ford has brought back the Puma moniker. This time, however, the Puma has been unveiled in the form of a crossover SUV.

First impressions of the Puma crossover reveal similar exterior traits to the European Ford Fiesta. At the front, the Puma sports “canoe-shaped” headlamps that sit high on the bonnet. The Puma also gets LED DRL strips with the LED fog lamps positioned right below. The fog lamps are integrated into the front air curtain inlets that guide airflow across the front wheels to reduce turbulence for aerodynamic efficiency.

The Titanium-spec Puma gets Pearl Grey machined 18-inch alloy wheels and chrome elements for the grille, side skirts and fog lamps. The rear diffuser and skid plate are finished in metallic grey, and the window surrounds in high gloss black. On the other hand, the performance-oriented ST trim gets 18-inch standard or 19-inch optional matt black machined alloy wheels and a sports suspension with specially tuned springs and shock absorbers. At the front, the ST-Line grille features matt black elements and a high-gloss surround, high-gloss foglamp surrounds, and an optional larger, functional roof spoiler.

Going inside, one of the main highlights of the Puma is its boot space. It boasts up to 456 litres of space with an adjustable boot floor and foldable rear seats. In terms of upholstery, the Titanium trim features leather-effect steering wheel and wood-effect appliques for the cluster bezel and instrument panel. The sportier ST-Line trim gets a flat-bottomed steering wheel, signature red stitchings, alloy pedals, and an aluminium gear shifter.

Standard features include an 8-inch central touchscreen infotainment system with Android Auto and Apple CarPlay and a 12.3-inch instrument cluster in which information can be customised to the driver’s preference. The Puma also gets a 10-speaker stereo sound system and massage seats.

The Puma is filled to the brim with plenty of safety equipment, including Ford’s CoPilot360 limited autonomous system and a segment-first 180-degree rear camera. The Puma also gets driver assistance and safety features like active cruise control, automatic emergency braking, pedestrian detection, and lane-keep assist.

Under the hood, the Puma will be powered by a 1.0-litre EcoBoost three-cylinder petrol engine alongside a 48-volt mild hybrid system. It will be offered with two power outputs: 125PS and 155PS. Ford plans to introduce diesel-powered variants further down the line. The Puma will be offered exclusively with front-wheel-drivetrain only.

The Puma will be a part of Ford’s Blue Oval Euro crossover family that consists of the EcoSport, Fiesta Active, Focus Active and Kuga. Prices are yet to be revealed, but the Puma will be launched in most European and international markets later this year. There’s no word yet on whether the Puma will make it to Indian shores but its uncanny design may not be a big hit with customers here - in any case, confirmation from Ford India is awaited.