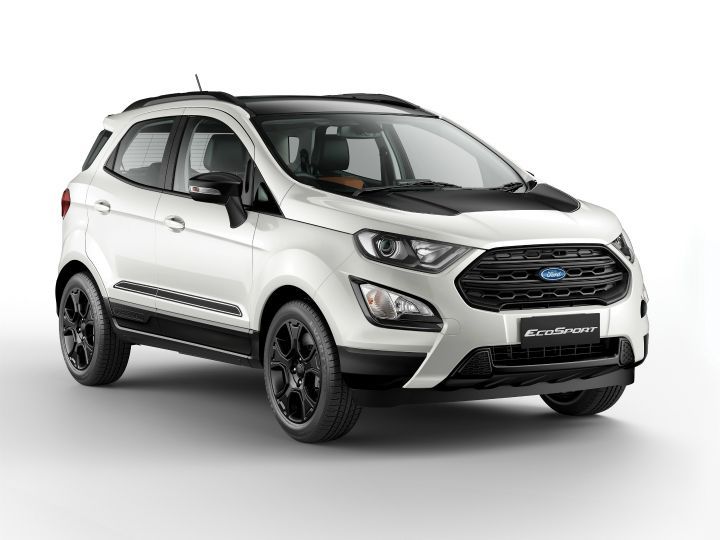 The Thunder edition replaces the previous Signature edition of the EcoSport which was launched alongside the EcoSport S variant in May 2018. The new variant is priced similar to the Titanium+ variant at Rs 10.18 lakh and Rs 10.68 lakh (both, ex-Delhi) for the petrol and diesel versions, respectively. However, it borrows some additional features from the top-spec S variant to offer better value.

Cosmetic additions on the EcoSport Thunder edition include headlamps with dark inserts and blacked-out fog lamp bezel. It also gets a new, all-black 17-inch alloy wheel design, a black grille, black decal on the bonnet and doors as well as black-coloured ORVMs. There’s even a ‘Thunder’ decal on the tailgate to distinguish the new variant from the others.On the inside, the Thunder edition gets a dual-tone theme cabin with the seats, dashboard and doorpads, instrument panel as well as the central console featuring Cognac (brown) accents. The rest of the cabin gets a black finish as before. Meanwhile, Ford has also updated the regular variant’s interior, which now features dual-tone beige instead of the all-black theme seen previously.

Apart from the revised cosmetics, the Thunder gets the sunroof from the EcoSport S as well as the 9-inch floating touchscreen infotainment system with in-built navigation. The Thunder edition is a standalone version but customers can also opt for it as a pack on the lower Titanium variant.

The Thunder edition is offered with same set of engines found on other variants of the EcoSport. This means you can choose between a 1.5-litre 3-cylinder Dragon TiVCT engine or the trusty 1.5-litre TDCi diesel unit. Where the petrol motor puts out 123PS of power and 150Nm of torque, the diesel unit churns out 100PS and 205Nm. Sadly, the Thunder edition is not available with the 6-speed automatic transmission. And Ford isn’t offering it with the award-winning 1.0-litre Ecoboost turbo-petrol engine either as it is limited to the top-spec S variant of the EcoSport.

Here’s a look at the revised prices of all the variants:

Ford has reduced prices of the other variants by Rs 8,000 to Rs 60,000. This has resulted in a new entry-level price of Rs 7.83 lakh. Despite the price cut, the recently launched Hyundai Venue remains the most affordable sub-4 metre SUV in the segment with an introductory price of Rs 6.5 lakh for the base variant. Can the new variant help the EcoSport, which pioneered the segment back in 2012, stay relevant? Let us know your thoughts in the comments below.

Recommended Read:
A Brief Look Back At The Various Generations Of The Supercar-Smoking BMW M5
The Ferrari SF90 Stradale Is A 1000PS Hybrid Beast!