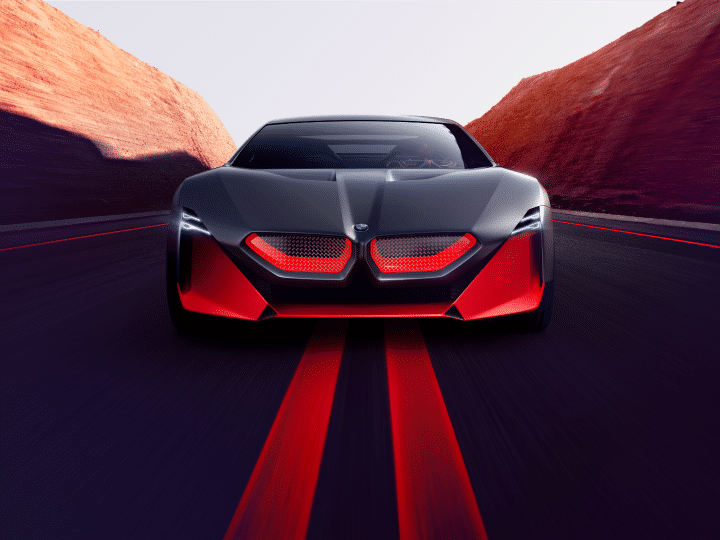 BMW’s foray into the EV segment started in 2013 with the i3, followed by the i8 the following year. While both these EVs have given BMW a good rep in the EV segment, they are slowing ageing with newer and more advanced alternatives available on the market. To counter that, BMW has unveiled the Vision M Next Concept, a car that has a variety of interesting tidbits. It employs an all-carbon fibre body which should help in keeping the car a featherweight, adding all-electric length and performance.

Starting from the exterior,  the Vision M Next Concept takes some styling cues from the i8, which would make it the ideal successor to the i8. The front and rear gets a matte ‘Thrilling Orange’ paint job along with the silk-matte ‘Cast Silver’ metallic paintwork on the rest of the car. Even the wheel rims get a unique color combination with the front rims getting a silver-and-black two-tone finish, while the rear sets get orange inserts to match the body. Aside from that, the front end retains the kidney grille with orange inserts alongside a cutting edge Laser Wire headlight.

The interior of the BMW Vision M Next Concept is just as radical as the exterior. It features gullwing doors that open via facial recognition. Inside, the Vision M Next Concept gets a driver-centric cockpit design with a unique high-performance drag-car-inspired steering wheel that has a fingerprint sensor as a starter button. Other tidbits include an augmented reality head-up display, curved glass centre display and a sleek digital dashboard that displays information such as revs, road speed, energy management and the driver’s heart rate in real time.

Under the hood, the BMW Vision M Next Concept gets a 2.0-litre four-cylinder petrol hybrid unit with two electric motors. All of this combined produces a power output of 608PS which is almost double of the current i8. It propels the hybrid from 0-100km in just 3.0 seconds and on to a top speed of 300kmph. In all-electric power, the M Next Concept manages a range of upto 100km.

The BMW Vision M Next Concept will debut at BMW’s NextGen conference in Munich. According to BMW, the production-spec Vision M Next concept will be a limited-run model that will be sold in the international market shortly before the introduction of the second-gen i8. The Vision M Next will also carry on the German carmaker’s ‘Strategy One Next’ initiative, which aims to put up to 25 electrified BMW models on sale by 2025.