The Q8, to be launched on 15 January 2020, is Audi’s answer to the flagship BMW X7 and Mercedes-Benz GLS 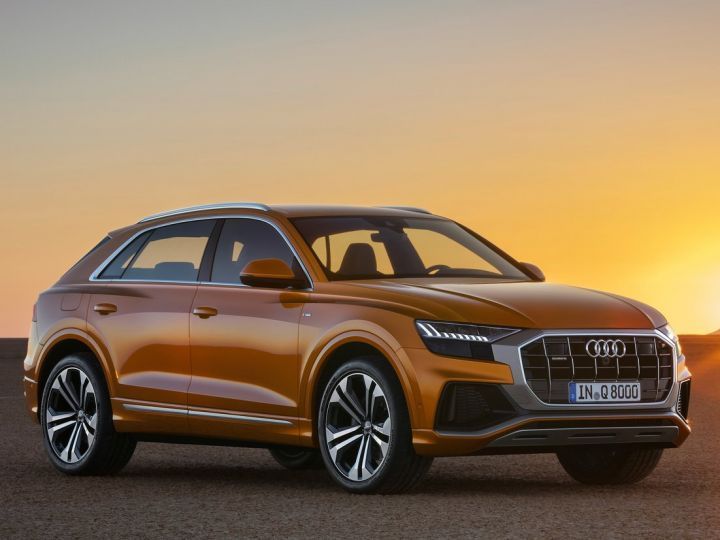 Audi India will launch its flagship Q8 SUV on 15 January 2020. Select dealers have started accepting bookings for a token amount of Rs 15 lakh. They have informed us that the Q8 is expected to have a Rs 1.40 crore price tag (ex-showroom) as it will be a fully imported completely built-up model (CBU). This puts it at an immediate disadvantage as the Mercedes-Benz GLS and BMW X7 are priced well under the Rs 1 crore mark. It will be available with a 3.0-litre TFSI petrol powertrain only.

The Audi Q8 is a smart-looking SUV. It comes with a massive octagonal grille (biggest on an Audi) that is flanked by Audi’s Matrix LED headlamps. Coupled with the sporty bumpers with large airdams, the Q8 embodies presence. It looks more SUV-coupe in its profile thanks to its sloping roofline. Those 22-inch wheels give the SUV a much required planted stance. Moving on to the back, the Q8 comes with connected LED tail lamps that do a small dance while locking and unlocking.

The Audi Q8 is a bit small when compared to the X7 and GLS. This is yet another disadvantage as people expect their SUVs to be proportionately big when signing a big cheque. Further black points for the flagship Audi is that it is a five-seater while its rivals are full fledged seven-seaters. Have a look to see how it fares against the X7 and GLS:

Inside, the Q8 comes with the latest dashboard as seen in the recently launched A6 sedan. It is slightly redesigned in the Q8 and comes with a massive faux AC vent that runs the length of the dashboard. The Q8 also comes with a twin touchscreen central console and Audi’s Virtual cockpit.

The Q8 will come to India as a petrol-only model. The engine on duty is the 3.0-litre TFSI petrol powertrain that develops 340PS of power and 500Nm of torque. It will come mated with an 8-speed automatic gearbox that sends its power via Audi’s quattro all-wheel drive system. Nope, the tried and tested 3.0-litre TDI engine that develops 286PS and 600Nm won’t be offered as Audi plans to have a petrol and electric-only portfolio post BS6 emission norms. This puts the Q8 at a disadvantage yet again as both its rivals have diesel variants.

Audi is doing a portfolio revamp and will launch nine new cars in the country. It recently launched the 2019 A6 sedan at Rs 54.20 lakh (ex-showroom).