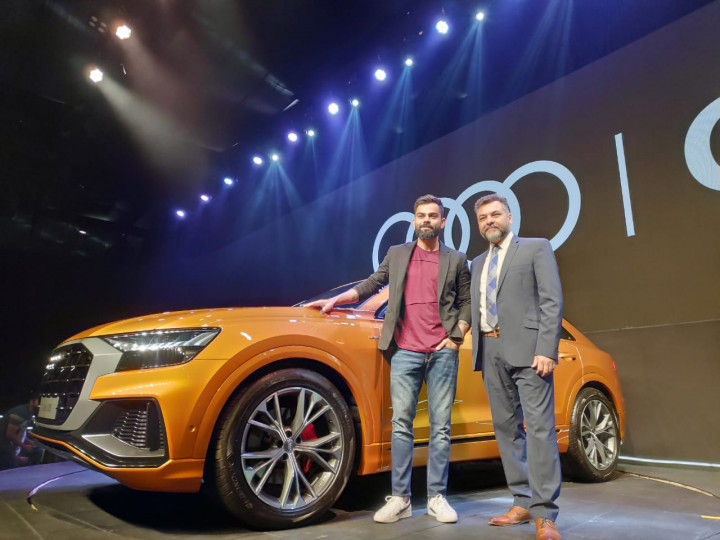 Finally, it’s here! Audi India has launched the Q8 flagship SUV in the country starting at Rs 1.33 Crore (ex-showroom). The range-topping SUV from Audi will be brought to India via the CBU route. The India-spec Q8 is available in a single 55TFSI quattro variant. There won’t be a diesel model on offer.

Visually, the Audi Q8 is a smart-looking SUV with a sporty hunkered down stance. Just like its stablemates, the front end comes with a single-piece grille -- the biggest on any Audi!  These are flanked by sleek LED headlamps, which can be optioned with Audi’s Matrix LED units. In profile, the Q8’s sloping roofline and taut stance is sporty! Further, the huge wheel arches are nicely filled by the 21-inch alloy wheels. Moving to the rear, the Q8 comes with connected LED tail lamps and dual exhaust tips.

Inside, the Audi Q8 comes with a high-tech twin touchscreen dashboard. The top screen controls the MMI infotainment system while the lower screen houses the climate control functions. The streaks of ambient light running through the border of the central console add to the rich ambience.

The Audi Q8 will be available with a BS6-compliant 3.0-litre TFSI engine with a 48v mild-hybrid system. It develops 340PS of power and 500Nm of torque. Power is sent to all four wheels via an 8-speed automatic gearbox. Nope, there won’t be a Q8 TDI in India. The numbers also don’t disappoint. The Q8 does the 0-100kmph run in 5.9 seconds and maxes out at 250kmph.

As standard, the Q8 rides on adaptive air suspension. The ride height can be adjusted 90mm as per your need. It can also be optioned with all-wheel drive steering, making the SUV more agile on your favourite twisties.

Audi will offer the Q8 with a plethora of customisation options. Noted ones include 54 exterior colour choices, 11 interior trim options, 9 types of wooden trims and various 21-inch alloy wheel designs. In fact, Audi says each and every Q8 will differ from each other.

Primary rivals for the Audi Q8 are the Mercedes-Benz GLS and BMW X7. Yes, it’s grossly priced when compared to its rivals but the Q8 is more exclusive and a red-carpet showstopper! Stay tuned to ZigWheels for our first drive review.