You Can Officially Buy A MotoGP Bike 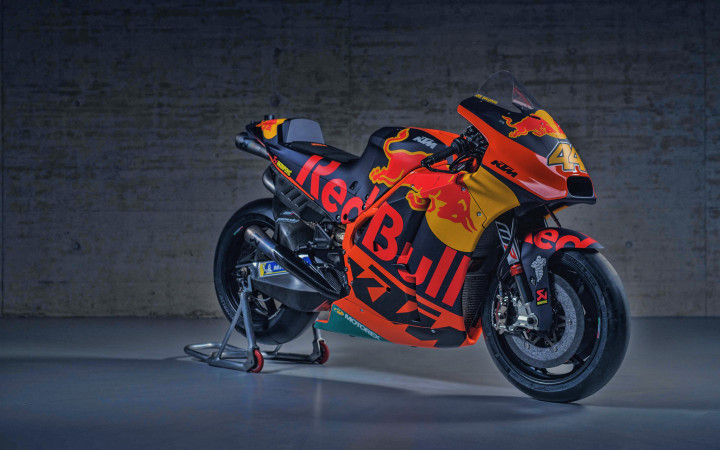 In the world of two-wheelers, there are some extreme bikes such as the Ducati Superleggera V4, Honda RC213V-S and the BMW HP4 Competition. If you still aren’t satisfied, there are limited edition track-specific motorcycles such as the Aprilia RSV4 X, Kawasaki Ninja H2R and the BMW HP4 Race. But, if money is no bar and you're in the market looking for something exotic and super rare, then you have found our dream bike. KTM has put two units of the KTM RC16 MotoGP bike on sale. Yes, you read that right, it's a MotoGP bike! Also Read: Honda RC213V-S First Ride Review

The bike on sale is the one piloted by factory KTM rider Pol Espargaro and as expected, it comes at an eye-popping price tag. The KTM RC16 is on sale for 288,000 Euros (excluding VAT). In Indian money, that is Rs 2.55 crore! Yes, that’s a lot of money for a motorcycle but then again, it’s the pinnacle of engineering on two-wheels. It’s akin to buying a fighter jet in the world of aviation, something our country recently brought. You can read about the Rafale here.

If you are wondering about the specs, the 1,000cc V4 motor pumps out an astonishing 265PS and the bike weighs just 157kg! With that bonkers power-to-weight ratio, it isn’t surprising that this KTM missile can achieve a top speed in excess of 340kmph! That’s as fast as the Lamborghini Aventador which costs almost three times more than the KTM MotoGP bike. Now doesn’t this deal look like a bargain (cries in poverty). Serious enquiries should be directed to rc16@ktm.com.

If you still aren’t convinced, the following benefits will definitely make this deal more enticing:

The only problem superbike owners in India might face with the KTM RC16 is that they can’t ride it on their breakfast rides to Cafe Coffee Day as it isn’t road legal. And, yes they can’t take pillion riders as well. Jokes aside, the KTM RC16 is a serious piece of kit and while mere mortals like most of you and me can only dream of riding a MotoGP bike once in our lifetimes, some blessed soul will be parking this in his garage. Dream on friends...