The 2018 version of Kawasaki’s middleweight adventure tourer has been priced at Rs 6.5 lakh (ex-showroom) 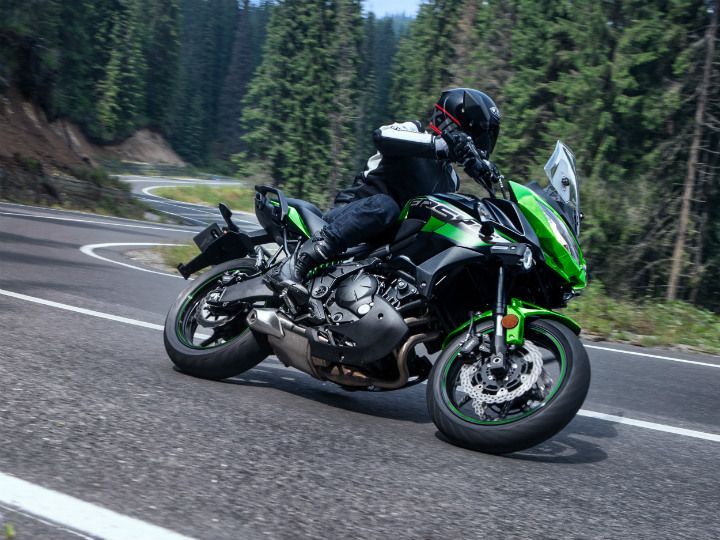 The Kawasaki Versys 650 is among the most versatile motorcycles on sale in India in the sub-10 lakh rupee segment and has been doing decent numbers since its launch two years back. Now, the Japanese two-wheeler giant has launched the 2018 version of the adventure tourer in our two-wheeler space at Rs 6.5 lakh (ex-showroom). The new bike gets the same black and green colour scheme as seen on the older bike but with revised graphics.

Apart from the new graphics, there have been no mechanical updates or additional features on the 2018 Kawasaki Versys 650. Powering the bike is a 650cc, liquid-cooled parallel twin engine that delivers 69PS and 64Nm of peak torque. Transmission duties are handled by a 6-speed gearbox. The Versys 650 gets the same brake setup as the Kawasaki Ninja 650: 300mm petal discs up front and 250mm single disc at the back with ABS as standard. The diamond type chassis is suspended on 41mm dia long-travel USF front forks while a monoshock unit does duty at the back.

The rear shock is adjustable for preload while rebound damping and preload can be adjusted on the USD forks. The bike has a 21-litre fuel tank capacity, which is a boon while touring, and weighs 216kg. The styling of the bike is inspired from its litre-class sibling and the bike gets a semi-digital instrument console with an adjustable flyscreen. The Kawasaki Versys 650 still remains the only middleweight adventure tourer on sale in India and the new graphics does make it visually more appealing and should help Kawasaki in garnering good sales figures.