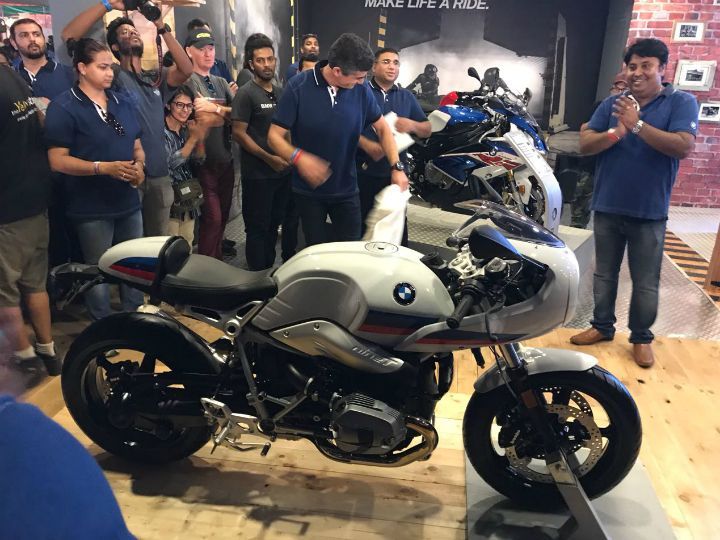 BMW Motorrad unveiled two new motorcycles at the 2017 India Bike Week (IBW) - a sporty bagger called the K 1600 B and a cafe racer called the R NineT Racer (pronounced as R Ninety). While the BMW K 1600 B has been launched at a price of Rs 29 lakh, the BMW R NineT Racer has been priced at Rs 17.3 lakh. Let’s take a look at the R NineT Racer first, which is the latest addition to BMW’s Heritage family of classic, retro-inspired bikes with boxer-twin engines.

The R NineT Racer features a retro front cowl with a round headlamp and a laid back windscreen. The 17-litre fuel tank looks bulbous and gets knee recesses that extend into the small and thin saddle. A hump at the tail is the final finishing curve on the bike. The bike comes with three-tone graphics on top that are reminiscent of BMW Motorsport’s colour scheme. We must admit, it’s a gorgeous looking bike.

At the heart of the retro bike sits a 1170cc, air-oil cooled, flat-twin engine that makes it a worthy addition to the Heritage clan. The engine churns out 110PS of power at 7750rpm and 116Nm of torque at 6000rpm. Talking about performance, the German bike maker claims a top speed of over 200kmph. Suspension duties are handled by 43mm telescopic forks at the front and a monoshock at the rear. The bike rides on 17-inch cast aluminum wheels. For braking, the bike employs 320mm twin disc brakes with 4-piston calipers at the front and a 265mm single disc brake with a double-piston floating caliper at the rear. ABS is standard on the bike. The R NineT Racer will compete against the Triumph Thruxton R and the upcoming Kawasaki Z900RS Cafe.

The second bike to be launched at IBW was the BMW K 1600 B, which is a sporty bagger. For the uninitiated, baggers are essentially touring motorcycles that are very similar to cruisers and have a boxy saddlebag on top of them that essentially look like an extension of the bike themselves. Baggers are quintessentially an American genre of bikes and the new K 1600 B is a German interpretation of it.

The K 1600 B gets a chopped windscreen and tubular handlebars with a massive 26.5 litre fuel tank, all of which will be a boon while touring. The seat are low-set and two 37-litre hard saddlebags sit on either side of it. Two chrome mufflers sit below the boxy panniers. Despite its proportion, it’s been designed beautifully. It looks sleek and rich with its free flowing bodywork.

The bike gets a 6-cylinder, liquid-cooled, 1649cc engine that churns out 162PS of power at 7750rpm and 175Nm of torque at 5250rpm. A 6-speed gearbox is used for transmission duties. It also gets an optional reverse gear. The tourer uses a Telelever front fork developed by Sachs and patented by BMW. This system eliminates front fork dive during hard braking and, given the mass of the 336kg bike, it’s a very useful feature.

To bring the bike to a stop, the bagger uses 320mm dual-floating disc brakes at the front and a 320mm single disc brake at the back. Another unique technology on the bike is the standard ABS along with cornering ABS that doesn’t allow the wheels to lock up in case of hard braking while cornering.

Other than that, the bike gets ride-by-wire technology and three riding modes - Rain, Road and Dynamic. For instrumentation, BMW has employed a 5.7-inch TFT screen which sits between two analogue units. The standard model also gets heated grips and seat, cruise control and a powered windscreen.

There are plenty of additional features one can opt for including a central locking system, keyless ride, gear-shift assist pro, reverse assist, adaptive xenon headlights with dynamic self levelling, audio system with Sirius radio and preparation for a GPS unit along with a Bluetooth interface control. These options can either be bought through various packages or even separately. But, expect them to come with a heavy price tag. The K 1600 B is packed with so many features that the left side of the handlebar features 11 switches, while the right gets three! The K 1600 B goes head to head with the 2017 Honda Gold Wing.

While these were just BMW’s offerings for this year’s event, you can take a complete look at what went down at the 2017 IBW by clicking here.