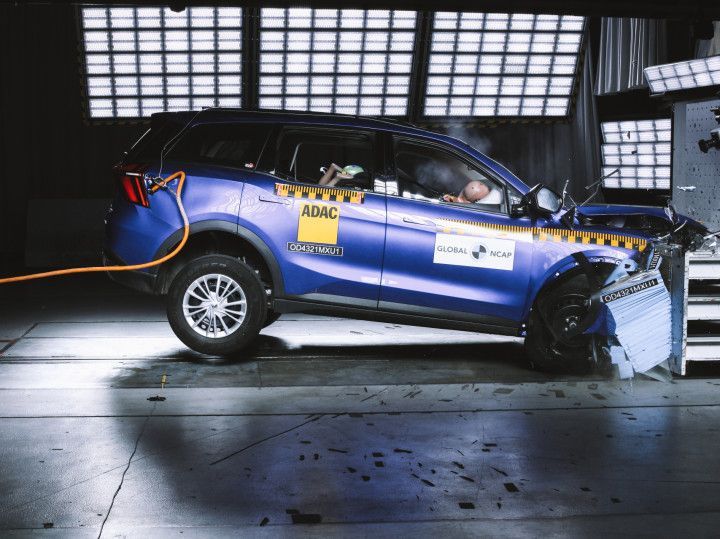 Mahindra’s new XUV700 has secured an impressive five stars in the Global NCAP safety test, making it the first model in its segment to get such a rating. This also makes it the second Mahindra, after the XUV300, to secure a perfect five-star rating in the Global NCAP #SaferCarsForIndia safety test campaign.

As is standard protocol, Global NCAP picked the trim which offered a standard set of safety features. So it isn’t surprising that a lower-spec trim with just dual airbags, ABS with EBD, and ISOFIX child seat mounts was used in the crash test. The XUV700 was crash tested at 64kmph and its body shell was rated stable and able to withstand higher loading.

Mahindra’s midsize SUV scored 16.03 out of 17 in AOP, which, incidentally, is slightly lower than the Tata Punch’s 16.45/17 rating. The SUV offered good protection to the front occupant’s head, neck, chest, and knees. The driver’s tibias had adequate protection while the co-passenger’s tibias had adequate and good protection. Even the bodyshell and footwell was rated as stable and capable of withstanding further beating. All of this explains the SUV’s five-star AOP.

Under this category, the XUV700 scored 41.66 out of 49, beating the Punch (which had the highest COP until now) by a narrow margin. The ISOFIX child seat mounts, which had clear markings, were able to prevent excessive movement of the three-year and 1.5-year-old dummies placed on rear-facing child seats. The presence of a rear lap belt for the centre occupant rounded up the SUV’s four star COP.

The Global NCAP applauded Mahindra for offering Autonomous Emergency Braking (AEB) in the XUV700’s top-spec AX7 trim. It further suggested offering side and curtain airbags, Electronic Stability Control (ESC), and three-point belts in all seating positions as standard in all trims.

The XUV700 has racked up over 70,000 bookings since launch. It’s offered with petrol and diesel engines, paired with manual and automatic transmissions. Prices start from Rs 12.49 lakh (ex-showroom), putting it in the same league as the Hyundai Creta/Alcazar, Kia Seltos, Skoda Kushaq, VW Taigun, Tata Harrier/Safari, and the MG Astor/Hector/Hector Plus.