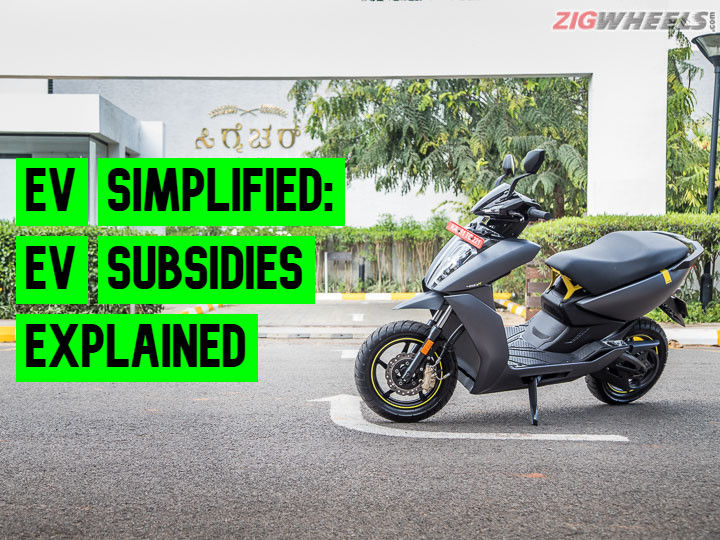 Earth’s limited quantity of dinosaur juice is running out rapidly and motorheads have turned to electrics to meet their mobility needs. The problem that arises as a result is the asking price of electric vehicles usually ends up being too high, pushing the scope of adoption of EVs out of the budget for many. As a result, government subsidies have been put into place so that buyers don’t bear the entire cost of the product.

Primarily, there are two sources of subsidies:

FAME 2 Subsidy - provided by the Central Government
The FAME 2 subsidy, which is short for Faster Adoption and Manufacturing of Hybrid and EV scheme, has been in play since April 2019. For any two-wheeler to qualify for the scheme, certain criteria have to be met. The two-wheeler should go 80km on a single charge and should manage to go at least 40kmph. Also, the two-wheelers also need to have a certain degree of localisation for it to qualify for the benefits.

If a product passes the criteria, the government offers a subsidy of Rs 15,000 per kWh of battery. So, the Ather 450X is eligible for a FAME 2 subsidy of Rs 43,500 per scooter. There is also a subsidy cap put into place, where the subsidy is only eligible for 40 percent of the vehicle’s total cost.

Now, while this subsidy is directly passed on to the customer, EV manufacturers already account for this subsidy when quoting the price at the time of purchase. The FAME 2 subsidy will remain active until March 31, 2024, the government extending the scheme by two years due to multiple factors like COVID-19 disrupting plans.

State subsidy
To sweeten the deal of buying an electric, several state governments have implemented their own subsidies. Now these vary according to the state with some offering fixed subsidies while some take into account battery capacity, performance and other such aspects before fixing on a price.

Take the Gujarat government for instance. The state has a Rs 10,000 per kWh subsidy scheme. However, the subsidy offered on a particular two-wheeler cannot exceed 20 percent of the vehicle value. Hence, if you buy a Revolt RV400 in Gujarat, you will get only Rs 20,000 back from the state.

For Maharashtra, eligible two-wheelers get a flat Rs 10,000 subsidy. There was an early-bird scheme that added an extra Rs 15,000 for those who bought an EV until December 31, 2021. The scheme has since been extended to March 31.

Plus, there is a battery-based incentive of an additional Rs 12,000 that can be availed if any EV has a battery warranty period of five years. Only a handful of EVs qualify for this, though.

These state subsidies are only valid for a single Aadhaar number. You will have to pay the entire amount of the vehicle to the company and later avail of these state subsidies. The state government will send the subsidy back to the account linked with your Aadhaar.

Aside from subsidies, several state governments are also waiving off road tax and registration charges for EVs. While the amount isn’t substantial, it does provide a slight encouragement to go green.