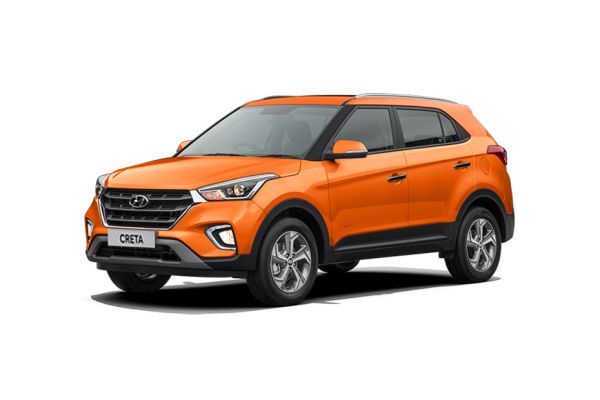 Hyundai Creta is a 5 seater SUV car launched at a base price of Rs. 10.00 lakh in May 2018 by Hyundai in India. Creta is available in both petrol and diesel . Creta petrol is powered by 1591cc engine claiming mileage of 15.8kmpl and Creta diesel is powered by 1396cc and 1582cc engine claiming mileage of 22.1kmpl. Creta also comes with automatic transmission. Hyundai Creta has a wheel size of 16 inch. It is available in 17 variants and 10 colours.

Hyundai has finally unveiled the 2020 Creta in India at Auto Expo 2020. The SUV, which is based on the Kia Seltos, gets a complete overhaul and will come with BS6 engines. We expect Hyundai to launch the 2020 Creta on March 17. Meanwhile, Hyundai also gave us a sneak peek of the interior through some sketches.

The carmaker still offers the current BS4 Creta, which is available with huge discounts. Hyundai is offering benefits on both BS4 1.6 petrol and diesel variants of the Creta. The latter comes with benefits of up to Rs 1.15 lakh.

The petrol 1.6 unit is good enough for 123PS/150Nm, while the diesel churns out 128PS/260Nm. Gearbox options on offer are a 6-speed manual and an automatic transmission. The Creta features a sunroof, a 7-inch touchscreen, cruise control, wireless phone charging, an Arkamys sound system, and Auto Link connected car features.

We’ve just compared the Hyundai Creta to two of its biggest rivals - the Maruti Suzuki S-Cross and the Renault Captur. Which one’s the right choice for you? You can find out by heading over to our detailed comparison review. In case you’re looking for a detailed review of the updated Creta, you can find that here. The Creta also had the distinction of being Hyundai’s 8 Millionth car in India. The South Korean brand achieved the feat in a little under 20 years.

If you want a Creta, you get to pick between five variants - E, E+, S, SX and SX (O). While the petrol engine is available across variants, you get the 1.4 diesel only in the E+ (there’s no E) and S variants. The 1.6 diesel is available with a manual transmission in the SX and SX (O) variant, and with an automatic transmission in the S and SX variant. Notably, the top-spec automatics borrow some features such as the sunroof and 17-inch alloy wheels from the top-spec manuals. If you’re slightly confused, we don’t blame you. If you’re on a budget, pick the S variant, and if you aren’t the SX variant should meet all your needs. Of course, no one’s stopping you from splurging and going all out.

With the facelift, the Creta’s design hasn’t changed dramatically. It still looks like the lovable mid-size SUV it always was, but with a few nip and tucks. The biggest update is on the face, where the wider cascade grille takes centre stage. Naturally, the bumper has been altered to accommodate the newer grille, and with its flowy character lines, it looks a touch more aggressive than before. Also new are the headlamps. The shape remains the same, but Hyundai has tweaked the detailing, and moved the daytime running lamp from the base of the headlamp to around the fog lamp. Save for the face, there are no major changes. Hyundai has given the Creta a new set of 17-inch alloy wheels, a new rear bumper (with a prominent faux skid plate) and reworked tail lamps. The facelift does add a dose of freshness (especially in the new orange and blue hues), but we were expecting some more wow by way of LED lighting.

The biggest change to the cabin of the Creta sits right above your head! Oh yes! In the top-spec manual and automatic versions, you get an electric sunroof. Other updates include a new MID (multi information display), a powered driver seat and wireless charging. Hyundai is also offering a wearable key they like to call the H-Band that also doubles up as a fitness tracker. In terms of space, it’s no different compared to the outgoing version. The cabin is still quite narrow, especially at the rear, which makes it a four-seater in our books. We’ve got no major complaints from the cabin otherwise - it’s built well and ergonomically sound as well. Goodies you expect in this price range including automatic climate control, a touchscreen infotainment system, cruise control ad rear air-conditioning is bundled in. However, a few features such as auto headlamps and wipers are strangely missing from the Creta. In terms of safety, the top-spec Creta gets six airbags, ABS with EBD, Hill Assist and electronic stability program. Strangely, ISOFIX child seat mounts are offered only in the top-spec automatic model. All other variants get dual airbags and ABS as part of the safety kit.

Renault Duster : The car that started it all, the Renault Duster is the only modern crossover in the segment to feature an AWD system. Its butch design, adequate space, CVT transmission (petrol), AMT (diesel) and all-weather ability make it score a lot of brownie points in the segment. Interior quality and limited service network make it less appealing.

Honda BR-V: Honda's offering in the segment is essentially a jacked up Mobilio with some mechanical changes to compensate for the raised stance. It is one of the only crossovers here that can seat seven people.

Nissan Terrano : The Duster's better-looking cousin (for some), the Terrano suffers from being too overpriced for its own good. It does get a diesel AMT variant, which is a good option for those looking for a convenient urban SUV.

Renault Captur : The Captur brings some style to a segment of boxy SUVs. If you want to stand out in the crowd or while munching highway miles - the big Renault is worth a dekko!

Maruti S-Cross : Heavily underrated for what it can do. Yes, it doesn’t have that lunatic 1.6-litre diesel engine anymore, but you can’t fault it for space, ride or features. What more do you want?

Kia Seltos: The Kia Seltos looks stunning, is really well built and is packed to the gills with features. There's an exhaustive list of variants, two trim packages, three engines and automatic options in both diesel and petrol power. It handles and drives like a car and the only real downsides are it rides a little on the stiff side and doesn't really give off those big SUV feels some people crave.

MG Hector : The MG Hector aces everything we love about big SUVs. It's imposing, spacious, rides nicely and is priced well too. Wow features include a massive panoramic sunroof and humongus touch screen infotainment system. There is some room for improvement when it comes to finish and build and it's dynamics around corners. Overall though it packs in heaps of value.