Ask your question from RC 200 owners and experts
Your Question should contain at least 5 characters Submit Cancel
Available EMI Options
Rs. 5,588 per month @ 6% Apply for Loan

Part of the price revisions for the new financial year, the KTM RC 200 has become slightly more expensive. It now costs Rs 2,06,112 (ex-showroom Delhi), which is Rs 2,016 more. It has received one of the lowest hikes amongst its Austrian siblings as there’s a new bike on the way.

The new 2021 KTM RC 200 is undergoing a major overhaul in terms of design and features. It will get a new face, a bolted-on subframe, and neat little touches that should make it a sharper motorcycle. The production of the bike seems to have commenced at the Chakan plant with the launch likely to take place in the coming few months.

The 199.5cc motor has been robbed of a little performance, down by 0.83PS and 0.2Nm to 25PS and 19.2Nm. But it is still the most powerful 200cc bike in India today. And despite meeting stricter emission norms, KTM has managed to keep the underbelly exhaust system. The engine continues to feature fuel-injection but doesn’t get ride-by-wire like the 390s. The KTM signature trellis frame which holds everything together continues to be a single-piece unit, unlike the bolt-on subframe design seen on the Duke. WP suspension is present at both ends - an upside-down fork and preload-adjustable monoshock. The bike is brought to a stop by ByBre disc brakes at both ends (300mm/230mm) with the assistance of dual-channel ABS. The 9.5-litre fuel tank could prove too small if you’re looking to tour long distances.

Not much needs to be said about the design: it’s the same fully-faired look that we’ve grown familiar with over the last 6 years. What’s new on the BS6 version are the graphics schemes and colour combinations on offer. The bike features a sculpted appearance with the highlights being the twin projector headlights up front, underbelly exhaust system and a sharp, steeply-rising tail section.

The RC 200 gets and LED tail-lamp and turn indicators, back-lit switchgear and fully-digital instrumentation, though it's an LCD unit unlike the TFT screen seen on the 390 Duke. Twin-projector headlights do a good job and the BS6 version now features dual-channel ABS, compared to the BS4 bike’s single-channel system.

Now nudging the past Rs 2 lakh mark, the RC 200 competes with the likes of the Bajaj Dominar 400 in terms of price, and bikes like the Suzuki Gixxer SF 250, Apache RR 310 and Bajaj Pulsar RS200 in terms of specifications and genre.

The KTM RC twins embody the Austrian bike-maker’s racing pedigree and history. The company’s recent foray into MotoGP underlines its devotion to making motorcycles that excel both on the road and race track. The ‘ready to race’ RC 200 is an eminently affordable entry-level sportsbike that you can ride to the track directly from the showroom. Launched in 2014, the RC 200 with its accessible power and razor sharp handling, has proved to be the darling of youngsters and track-day enthusiasts. 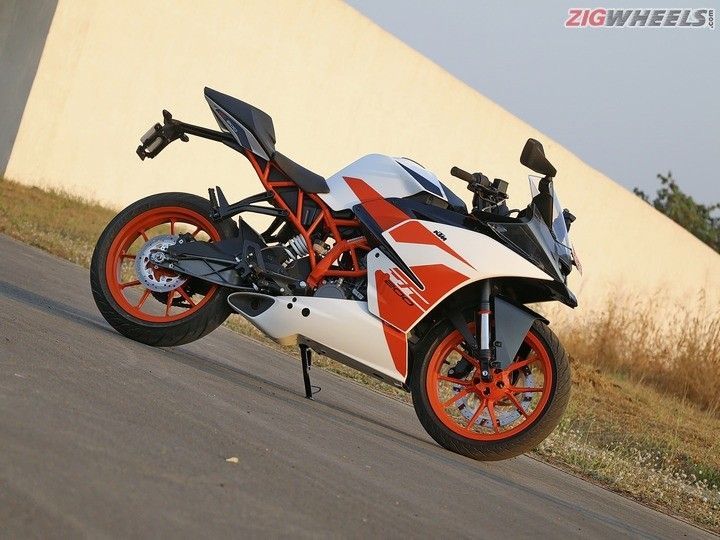 With the next iterations of the Duke 390 and 200 around the corner, the updates should last until the arrival of the next-generation bikes. The bigger KTM RC 390 has been given a substantial revamp, while the RC 200 makes do with minor tweaks. The KTM RC 200 gets new, white graphics that make the bike appear larger and a set of bigger mirrors. 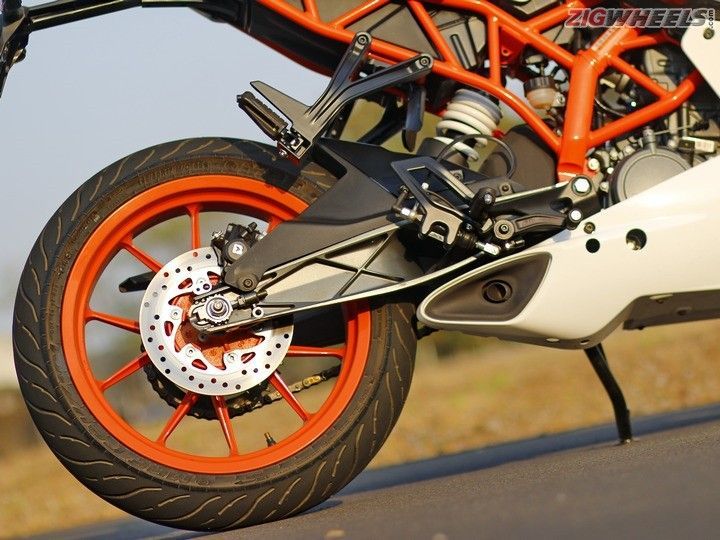 The wheel hubs are bigger though the 17-inch wheel diameter is retained, and the alloy spokes are smaller and more rigid. The plastic shroud around the rear monoshock guards the shock absorber from muck and debris thrown up by the rear wheel. 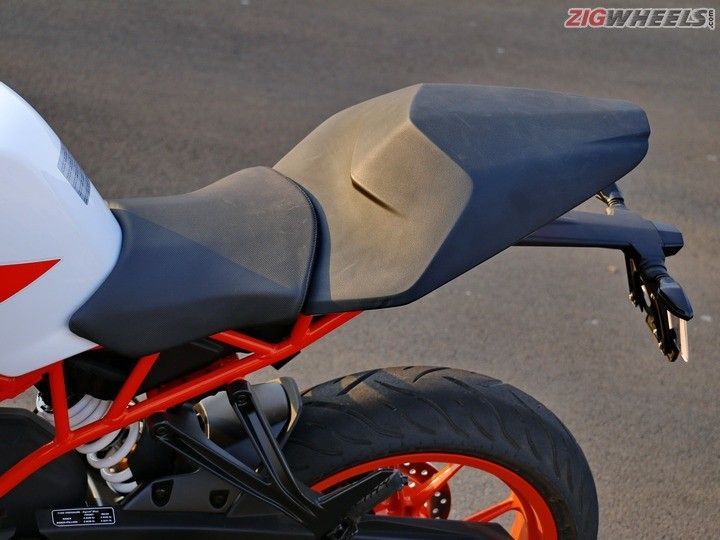 The saddle gets better quality cushioning. The rest is identical to its predecessor including the top-spec cycle parts. The 199.5cc liquid-cooled and fuel-injected motor is now BS IV compliant with an identical class-topping power output of 25.4PS at 10,000rpm and 19.2Nm at 8000rpm. 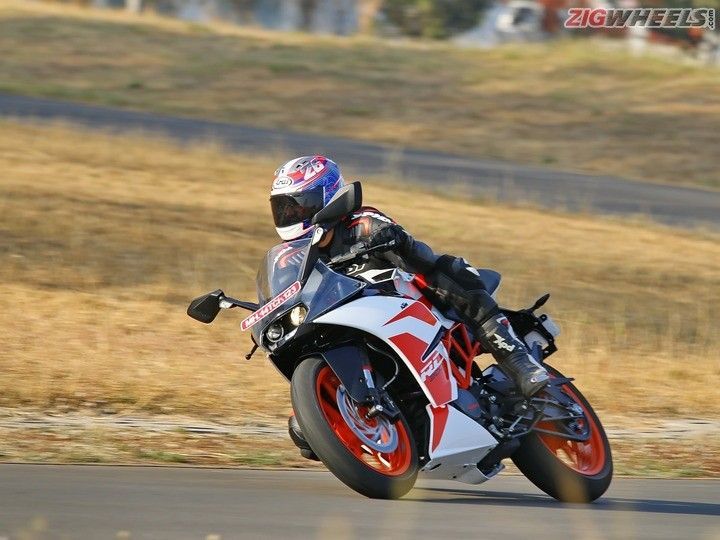 We were invited to ride the new RC twins Bajaj Auto’s full-fledged test track at Chakan, which features some technical corners and a 1.1-kilometre straight. The RC 200 felt at home on the track. The trellis frame that helps keep the weight at a low 137.5kg (dry), is exceptionally stiff. The bike has a smaller rake for sharper steering response. The top-spec cycle parts are similar to the RC 390’s. The 43mm WP front fork and WP monoshock rear set up on the stiff side translate into exceptional on track agility and flickability. 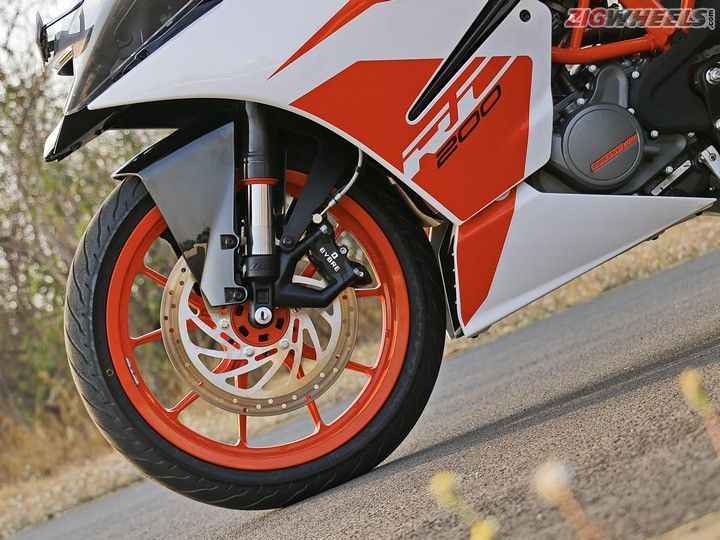 The 300mm front brake is clamped by a four-piston radial calliper, while the rear is a 230mm unit. The Bybre brakes wield a strong bite and exceptional feel, definitely the best in the segment. Tyres define a bike’s on track performance and the MRF Zappers on the RC 200 deliver both on the road and track. That said, you’ll need stickier premium for the RC 200 to deliver as a track tool. The Metzelers on the RC 390 are a revelation, enhancing corner speeds, lean angles, outright grip and boosting overall rider confidence. 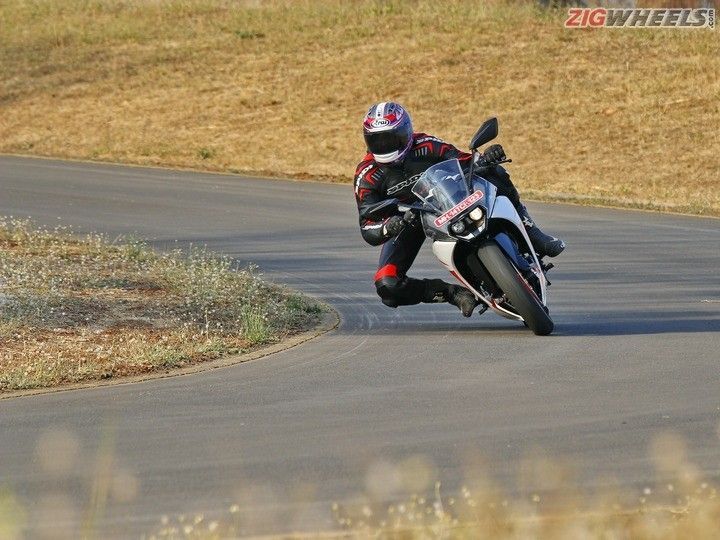 The 200’s KTM engine is even more frantic in nature. A bit of a bother on the streets, the engine comes into its own on the track. The motor is very responsive and quick to rev up. The rev limiter though cuts in too sharply and can be an issue when you are leaning into a corner. We managed to hit a speedo indicated 136kmph in sixth on the long back straight before the rev limiter cut in. Overall, the RC 200 is physically demanding with its super committed riding position and an edgy high-strung motor that keeps you on your toes on the race track. 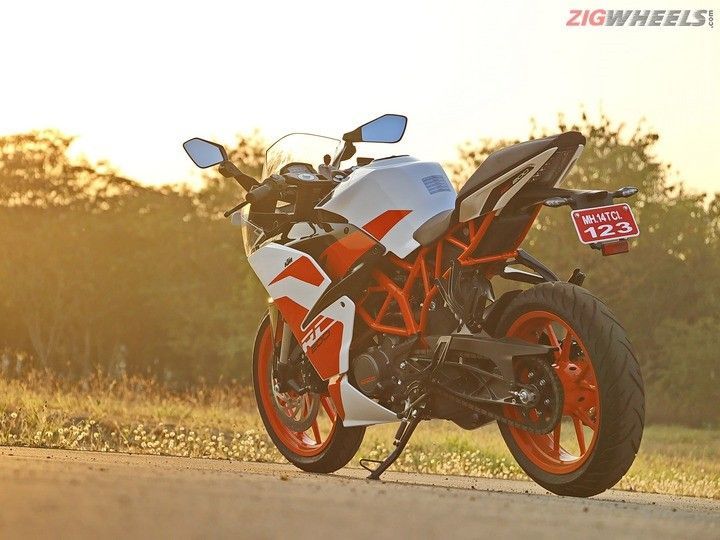 The RC 200 is still the best performer in its class and still delivers the most involving riding experience. The facelift makes it look fresher, bigger and will appeal to the track enthusiasts. With its stiff suspension and committed riding position, it is not really meant for daily use, but it’s your ticket for the twisty stuff. At Rs 1.71 lakh, the RC 200 remains the most competent entry-level sports bike, until the new edition arrives.

What are the colours available in KTM RC 200?