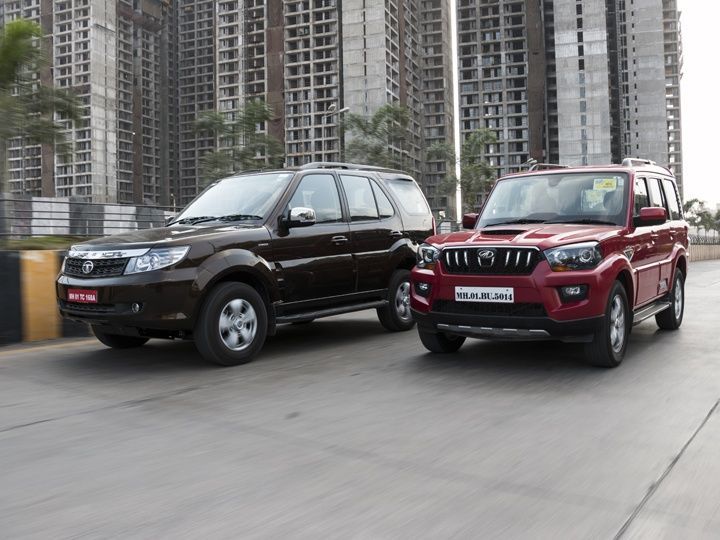 When the Mahindra Scorpio and the Renault Duster AWD were launched last year, we pitched them both against the Tata Safari Storme in a mega battle. And although the Safari Storme did put up a good fight, it lost out mainly due to poor quality interiors, weird ergonomics and a dated multimedia system. But now, Tata is about to introduce a refreshed version of the Safari Storme. We pitch the two against each other once again to find out how the equation has changed.

As far as styling is concerned, the Mahindra Scorpio still looks a lot more contemporary than the Tata Safari Storme. And that, thanks to the eyebrow DRLs above the projector headlights, that large predator grille and that nicely integrated scoop on the bonnet. Up front the only change on the facelifted Safari Storme is the Land Rover inspired honeycomb grille and although it does have projector headlights too that still doesn’t bring it on par with the rival in discussion. At the back too, the story is pretty much similar. While the Scorpio gets LED tail lights the Safari Storme still sports conventional ones, and then the Mahindra also has the black cladding at the back to give it a rugged appearance.

Like all other offerings from Tata, the Safari Storme too was low on quality and a premium feel, but in this facelifted version they have worked towards making it better. As opposed to the beige dash in the outgoing model, the new one gets a black one that is complimented well by bits of silver on the steering wheel, around the gear lever and the centre console, and it sure looks good. The leather seats have now been replaced by fabric ones and it is disappointing considering the price tag of the car.

All said, the Safari Storme still doesn’t strike the right cord as far as the overall interior design is concerned. The Scorpio on the other hand is not just neat to look at but also has premium-ness written all over it. The light and dark grey combo is a lot more pleasing to look at thanks to some bits of chrome and the massive Scorpio badge.

Now for some details that we liked. Tata’s new steering wheel is good to grip and button on it are easy to use as well. The Scorpio’s instrument cluster is a lot more informative yet easily legible. The front two rows of the Safari Storme offer a lot more comfort, but at the back the Scorpio has more headroom.

When Mahindra introduced the Scorpio in this new avatar, they ensured that it came loaded with features. From a touch operated centre console, climate control, navigation system to cruise control, it has all the bells and whistles. Moreover, the Scorpio is the first car in its class to get a start/stop feature.

Although the facelifted Tata Safari has taken steps in the right direction as far as features are concerned, but they still haven’t matched up to the standards set by the Scorpio. Thankfully Tata has done away with the aftermarket music system and installed a factory fitted, but unfortunately it is still a single DIN unit. It doesn’t get cruise control or navigation either. The Safari Storme though gets disc brakes on all  four corners while the Scorpio just has them up front.

Both cars come fitted with ABS as well as airbags, but considering the size of both the cars, a reverse camera is needed.

The Scorpio is powered by a 2.2-litre oil burner from its previous gen model and it continues to make 122PS of power at 4,000rpm and 280Nm of torque between 1,800-2,800rpm. The car feels responsive and has ample of mid-range grunt which really comes in handy while overtaking. But rev it a little hard and it doesn’t quite feel at home. That said, it is feels better refined than the Safari Storme and the NVH levels are better too. But we wish the 5-speed gearbox was smooth and the clutch wasn’t as heavy.

The Tata Safari Storme too gets a 2.2-litre unit, but that’s where the similarities end. The Safari Storme now gets the Aria engine that makes 150PS and 320Nm. The Safari Storme does feel a lot more refined than before but it still has some catching up to do in comparison with the Scorpio. It doesn’t feel as quick on its feet either. That said, thanks to the bump in the power, it does feel a quick to respond to inputs. But the 5-speed gearbox doesn’t quite do justice to the motor. It feels notchy and can sometimes be a pain to slot into the right gear. The clutch though feels a lot lighter than the Scorpio.

Both cars have their positives and negatives as far as ride and ease of driving is concerned. To start with, seating is high on the Scorpio as well as the Safari Storme thanks to which, visibility is not an issue. Only, as mentioned earlier, parking would have been a lot easier had they been fitted with a reversing camera.

Although Tata has changed the steering wheel which now feels more car-like, it is still not as comfortable as the Scorpio. The Scorpio’s steering wheel is closer to the door which makes the overall driving position a little cramped, which isn’t really the case with the Safari Storme. The clutch on the Safari Storme is a lot lighter than the Scorpio which makes it easier to drive around in the city. And then the Safari Storme  also has a weirdly positioned fuel lid opener means that you end up pressing that when you want to roll down the windows.

Well, considering their size and height, SUVs aren’t really for those who like to carve corners. But between the two the Scorpio without doubt feels a lot more confident around a series of bends. And a lot of it can be credited to the new chassis and the suspension setup which is a lot more rigid than before. As it’s a facelift, the Safari Storme’s underpinnings remain the same, which means that it push it hard and it still has body roll.

And if you intend to push it really hard, you will have to struggle to find the right line. In terms of braking, although the Scorpio has drum brakes at the back while the Safari Storme has all-four discs, both perform equally well.

Now when you look at the Safari Storme it surely seems a lot better product than before. Tata has been smart to improve its interior quality, better the ergonomics and also plunk a motor that makes slightly more power and torque. But sadly, when parked next to the Scorpio it still feels dated. And not just because it looks the same as before, but also considering the features that it has on offer. Moreover, the Scorpio’s engine is a lot more refined and it has better handling dynamics as well. So as an overall product, the Mahindra Scorpio still gets our vote.

Recommended Variant : Safari STORME VX 4x2 Varicor 400
Was this article helpful Yes No
Sorry about that