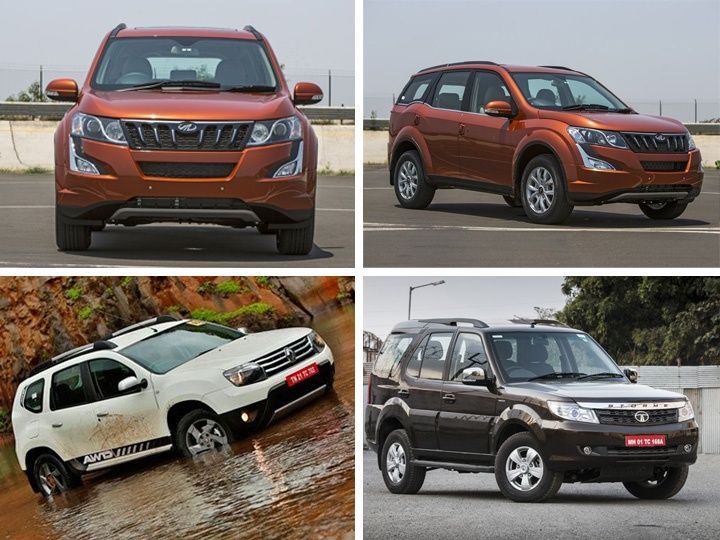 Looks: Even when it was first launched in 2012, the Mahindra XUV 500 was quite a looker. But in this new form, it looks a lot more contemporary or as Mahindra rightly calls it ‘New Age’. Mahindra has made quite a few changes on the refreshed XUV 500. The new front grille gives it an aggressive stance up front. And then to make it look upmarket there are those static bending projector headlamps. Other changes include, the L-shaped fog lamps with chrome bezel, new 17-inch alloy wheel design and the chrome lining along the windows.  Few changes at the back include a bolder chrome garnish over the registration plate.

The Renault Duster too was launched around mid-2012 as well. But unlike Mahindra, when the French car maker launched it in the AWD variant last year, they didn’t bring it with as many cosmetic changes. The smoked out headlamps, the gun metal finished alloy wheels and AWD decals along the sides were the few changes on the car, and they don’t quite work in making it look as aggressive as its rival in discussion.

Tata too seems to be taking the same route as Renault. The upcoming Safari Storme too doesn’t sport too many changes when compared to the New Age XUV 500. The only noticeable alteration being the Land Rover inspired grille.

Features: In terms of features too Mahindra has upped the ante with the New Age XUV 500. This updated model comes with a long list of features including button start, keyless entry, reversing camera rain sensing wipers and the likes. On the inside it comes with a 7-inch touch screen infotainment system with GPS, an electric sun roof and electronically adjustable seats.

Both the Renault Duster as well as the facelifted Tata Safari Storme, don’t come with such a long list of equipment. That said, the Duster does come with a touch screen infotainment system as well and has cruise control too which the XUV 500 misses out on. But then the Duster AWD misses out on projector lamps, reverse camera, keyless entry and quite a few other features. Despite being a recently facelifted the Safari Storme too doesn’t come fitted with all the bells and whistles like the XUV 500.

Dimensions: With regards to size, it is the refreshed Tata Safari Storme that is the longest at 4,655mm while the New Age XUV 500 stands is 70mm smaller at 4,585mm. The Duster though is undoubtedly the smallest of the three with an overall length of just 4,315mm. In terms of width and height too the equation pretty much remains the same with the facelifted Tata Safari Storme sporting larger dimensions as opposed to the XUV 500 and the Duster. The Tata Safari Storme’s wheelbase though is the smallest at 2,650, while the Duster is marginally longer at 2,673mm and the XUV 500 has the largest wheelbase of 2,700mm. How these dimensions transform into space on the inside though is something we will be able to tell with surety when we do a real world comparison of the three cars.

Engine: The New Age Mahindra XUV 500 as well as the 2015 Tata Safari Storme both sports a 2.2-litre oil burner. However the power ratings stand at 142PS and 150PS respectively. At 320Nm though, the Safari Storme makes marginally lesser torque than the New Age XUV 500. The Renault Duster on the other hand makes 110PS and 248Nm. Another very important aspect to be considered while talking about performance is the weight. The refreshed Safari Storme tips the scale at 2095kg, the new XUV 500 at 2,450kg while the Duster is the lightest of the lot at 1,290kg. While the Renault and the Mahindra come mated to a 6-speed manual transmission, the Tata uses a 5-speed gearbox.

Price: Now for the most important factor before purchasing a car – the price. The 2015 Tata Safari Storme hasn’t been launched yet, but the older version is currently was priced between Rs 9.93 lakh to Rs 13.70 lakh. We expect the new one to be launched at a slight premium over the current gen model. Prices for the Duster start at Rs 8.30 lakh and go right up to 13.55 lakh for the top-end AWD trim. The recently launched New Age XUV 500 has been priced at Rs 11.21 lakh for the base variant and Rs 15.99 lakh for the top-end trim. All prices ex-showroom Delhi.