First, it wowed us with its looks and features, then it upped the ante with its pricing. But is the Lexus NX 300h the midsize luxury SUV you were looking for? 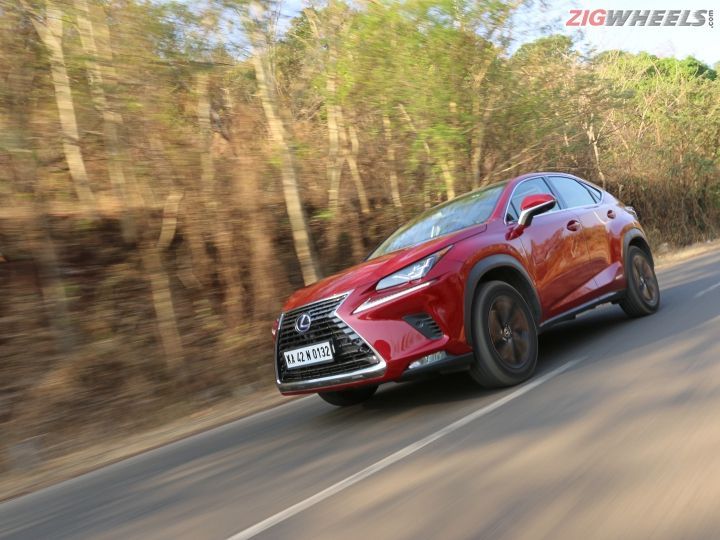 The first impressions of the Lexus NX300h were impressive but also made us linger on one question. Almost a month later, Lexus revealed the prices and the question returned. Now, a comprehensive review of this unique looking, feature-loaded hybrid SUV should help resolve that question - who is this for?

The Lexus NX would not look out of place on the runway of a fashion show; even the Jaguar F-Pace looks a tad simple when the NX comes into the frame. It’s taken the design game to another level. This is not to say that the NX is an objectively beautiful crossover; some elements like the humongous ‘spindle’ grill and the various cuts and creases on the side may not be to everyone’s tastes. But it is stunning nonetheless. The Red Mica Crystal Shine paint also helps highlights the various surfaces of the car, with the interplay between light and shade creating some interesting effects.

The photos may not show it, but the NX300h is not a compact crossover; that is an illusion created by elements like the sleek 3-element all-LED headlamps, the compact glasshouse on the side and the scalpel-cut rear end. At 4.6-metre long, 1.8-metre wide and 1.6-metre tall, this is well within the size bracket of the other SUVs/crossovers in the Rs 50 lakh+ category.

Approach the doors and the handles light up to beckon you in. The brazenly in-your-face design theme continues on the inside too; the dashboard is very high set with the centre console getting a distinct two-step design. While stunning to look at, the layout also makes it easier to operate the myriad of buttons for the climate control and the seat ventilation systems. While our car came with White Ochre (Beige)/Black seats and an all-black dashboard, the NX300h in the luxury trim is also offered with six other interior themes.

If you like being the centre of attention, the NX can be your perfect accessory.

The NX300h could be a geek’s paradise, and it’s not just because it is powered by a complicated hybrid powertrain. The 10.3-inch infotainment screen atop the rather tall dashboard accommodates dual displays at the same time. These include displays for satellite navigation, multimedia playback, parking camera (along with a dynamic and a 360-degree system), a very interesting power generation/distribution display and an energy efficient driving guide.

The NX300h utilises four cameras to create a virtual 360-degree view of the surroundings, which is not exactly a new feature. What is interesting about the NX’s system, though, is the way the system automatically changes the view if it detects obstacles that need to be highlighted.

The infotainment screen is not touch-enabled, as stretching out to use the unit everytime doesn’t make sense anyway. Instead, the NX gets a large touchpad beside the gear lever on the lower dashboard. This can be used to navigate the plethora of features, with haptic feedback from the touchpad letting you know of every action. It takes a while to get used to, but it is a less distracting system to use on the move than traditional touchscreens. Still, we don’t think this is the best implementation of an infotainment control scheme - Audi’s MMI and BMW’s iDrive certainly do a better job.

The Lexus NX300h misses out on modern smartphone connectivity options like Apple CarPlay and Android Auto, but has every other input possible including Bluetooth, USB and MiraCast. A wireless charging pad under the armrest redeems some brownie points for the NX, with the ability to charge Qi-enabled phones on the go without the hassle of connecting wires.

A massive panoramic fixed-glass sunroof, ventilated/heated front seats, heated rear seats with electric recline and folding, a hands-free electric tailgate and a head-up display with changeable screens complete the geekfest inside the NX. Sure, there’s nothing here that the up-to-date geek hasn’t seen before, but there are enough features to claim some bragging rights.

The NX does have a lot of luxurious features; the front seats are 8-way electrically adjustable with the driver’s seat getting 3 memory settings. Both, the front and the rear seats, can also be heated at the touch of a button - not really helpful in our climate, but it does add to the luxury quotient. The front seats can also be cooled, which was really helpful in keeping the front occupants cooler in the blistering heat wave that hit Pune during our tests. The rear seats can be reclined as well as folded flat electrically. Then there is that HUGE panoramic fixed sunroof that lets you watch the sky from a cabin as whisper-quite as imaginable.

But it is clear that the NX is targeted to cosset front occupants more than the ones at the rear. Sure, the rear seats can be reclined and there is a chunky centre armrest too, but there is nothing here to keep the two comfortable passengers entertained or occupied otherwise. The controls for the infotainment system, including the controls to play songs through the brilliant 14-speaker Mark Levinson surround sound system, are restricted to the driver only. Most importantly, the NX is not the most spacious SUV to be in, for rear occupants. Protruding rear A/C vents and a tall transmission tunnel restrict the rear seats to comfortably accommodate only two people, and the sloping roofline restricts headroom here as well.

For the jet-set environmentalist?

Unlike its competition, the Lexus NX is only available with a petrol-electric parallel-hybrid powertrain. This combo consists of a 2.5-litre petrol engine and two electric motors - one on each axle. The headlining feature of this system is its fuel efficiency (for a petrol-powered car) and low emissions.

The NX’ powertrain is tuned to be as efficient as possible, with the system deciding which power source can help achieve that, automatically, according to various parameters. If you are gentle enough with the throttle in the city, the system will try maximising battery usage to burn as less fossil fuel as possible. At higher speeds, however, the petrol engine is almost always on, managing the dual responsibility of powering the car as well as charging the battery. All this happens regardless of which driving mode you are in, with the system getting more aggressive with fuel-saving measures when in ‘Eco’ mode.

Lexus claims that the NX can achieve a combined fuel efficiency of 18.3kmpl. In our tests, the NX300h managed 13.12kmpl in the city and 18.42kmpl on the highway, which is impressive, considering its diesel competition is not as efficient. Case in point, one of the newer cars in the segment, the Volvo XC60, powered by the D5 diesel engine, only manages to return 11.42kmpl in the city and 15.10kmpl on the highway! Couple the efficient powertrain with the inherently lower emissions of a petrol engine and the NX does make sense for those who care for the environment but don’t want to give up the luxuries of life.

The numbers are not sporty - a combined system power output of 197PS and maximum torque output of under 300Nm from a 2.5-litre engine along with two electric motors is not a recipe for a really fast car. On top of that, the NX300h weighs slightly more than other petrol SUVs in the class because of the 204-cell nickel-metal hydride battery pack and the electric motors. Where the Mercedes-Benz GLC 300 4Matic has a kerb weight of 1871kg, the NX weighs 34kg more.

Even if you select the sportier ‘Sport+’ driving mode, the crossover does not feel like it can do anything faster than a 0-100kmph time of 10.16 seconds (at least in our conditions), even though Lexus claims the same is possible in 9.2 seconds. This is because its powertrain is designed more for efficiency and comfort than outright performance. Simply put, its impressive mileage figures mentioned above would not have been possible if the engine and motors had been cranked up for maximum performance. That said, it shouldn’t feel slow in day-to-day driving in the city or out on the highway.

The relaxed nature of the powertrain is not the only reason you wouldn’t want to drive the NX aggressively. Find a set of corners and you discover that, in spite of being an AWD SUV, the NX is primarily front-wheel-driven - and has the understeery nature that is natural to such cars. The engine at full tilt does not sound great, and with no progressive gearing (the NX uses an e-CVT, where a set of electric motors act like pulleys and belts inside of a traditional CVT), the drone of the engine can get a bit annoying.

The steering is unnaturally heavy in Sport/Sport+ mode and makes it harder to change directions quickly. Strangely, the steering does not lighten up much even if you switch to its comfort setting. The nicely shaped paddle-shifters behind the steering wheel feel a bit pointless as the system often overrides your commands without warning. The final nail in the coffin for the NX’ sporty appeal is the brake feel. Being a hybrid, the NX uses brake energy regeneration and it is very difficult to get the brake modulation right. The initial bit of brake travel is exclusively used to run the generator, which forces you to brake harder only to realise you have braked too much. If you are looking for a sporty SUV in this segment, the NX is not for you.

The NX300h may look sporty and flashy inside-out, but everything in it is designed to make you calm and content. The hybrid powertrain is truly magical if used in the city, as it moves silently most of the times and sips fuel from a skinny straw. The cabin is super quiet at most times, ready to be filled with beautiful tunes played through its superb sound system. As an added bonus, you can be proud that you are doing your bit for the environment, and are one of the pioneers who helped promote green cars for the future.

All said and done, the Lexus NX300h is for those who want a luxury petrol SUV for a very comfortable and relaxed city commute, but want to stand out from the crowd, not to forget, having bragging rights with regards to efficiency as well. And there’s nothing like it in India, at least, for now.