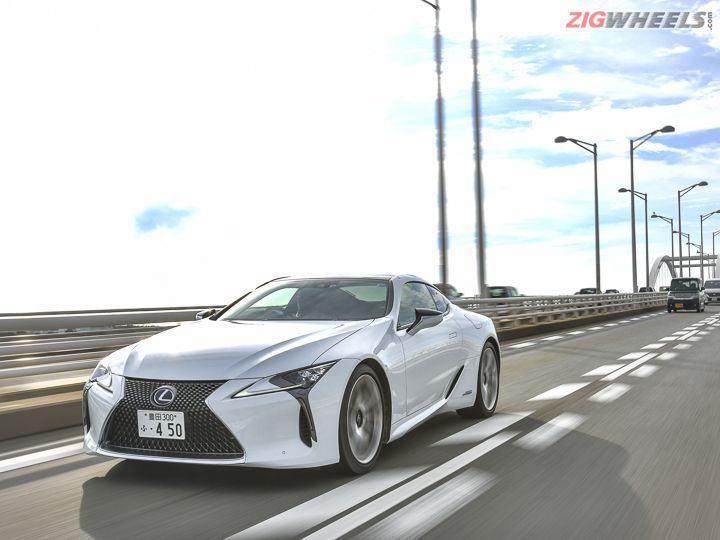 This is the most focused sporty road car Lexus has ever made after the much-acclaimed LFA. But unlike the LFA which had a screaming V10 engine under the hood, the LC 500 gets either a smaller naturally aspirated V8 or a greener V6 hybrid powertrain. Which makes sense too, as Lexus has positioned the LC 500 as a luxury coupe rather than a sports car. When launched in India in early 2020, the LC will only come with the hybrid powertrain and according to our calculations, it will cost around Rs 1.8-2.0 crore (ex-showroom). This will put the LC 500h up against the mighty Mercedes-AMG S 63 Coupe and the soon to be launched BMW 8 Series. Quite a tall order to match then!

With the LC 500, Lexus was out to change the impression that it makes boring looking luxury cars and instead become known for trend-setting, youthful and unique designs. The effort put in shows from the moment you lay your eyes on the LC 500. Look at it from any angle and this flagship Lexus coupe looks stunning. Despite having multiple sharp cuts and creases, it comes across as a well-rounded, proportional machine.

The signature Lexus spindle grille is sharper than ever and the beautifully designed three-element LED headlamps look purposeful. Details like how the grille lines flow through the bonnet, onto the roof and onto the bumper to mimic the spindle grille make the LC 500 feel spectacular.

In profile, things get even better! The design has been heavily influenced by the beautiful LFA, but the long hood, GT-like long boot and the taller cabin give it its own identity. The massive 21-inch forged aluminium alloys and the well-defined shoulder line are clearly the highlights.

The LC 500h is based on the GA-L (Global Architecture – Luxury) platform that also underpins the LS sedan. The chassis is made up of high strength steel, aluminium and carbon fibre in key areas to increase rigidity and save weight. Despite this, the LC 500h weighs in excess of two tonnes! To counter this, Lexus has added tech like rear-wheel steering and variable-ratio steering rack to help make the LC as agile to drive as possible.

Where the exterior styling is attractive, the interiors of the LC 500h are a work of indulgence. The choice of materials inside this Lexus is top-notch and touch or feel of any surface exudes luxury. The dashboard is wrapped in premium leather and the contrasting Alcantara trim on the door pads looks and feels first class.

The centre console is tilted towards the driver, maximising the driver-focused feel. Combined with a low-slung driving position, the LC 500h feels quite sporty to be in. All the important controls fall to hand easily and the placement of the drive mode and ESP toggle switches on either of the instrument panel gives you an airline cockpit-like feeling.

The digital instrumentation derived from the LFA is magnificent and the graphics, especially in Sport mode, would make a seasoned graphic designer proud. What is not so great is the infotainment system that feels a generation or two behind the likes of what you get in a Mercedes or a BMW. Scrolling through menus is not the easiest and the touchpad isn’t intuitive enough to use on the move.

The sports seats are snug and offer great lateral support, they tend to keep you in place even during hard cornering. You get a pair of rear seats too, but they are extremely cramped and are best used as additional luggage space if you’re going on a cross-continent drive as the lithium-ion batteries located above the rear differential eat into the boot, offering only a measly 133-litres of space. The S-Class Coupe would be a much better choice if you had to seat four and take some extra luggage.

It’s packed with safety feature too - you get eight airbags, including knee-bags for front passengers, ESP, pre-collision pedestrian detection and lane keep assist. The car that will come to India will get the Sport Pack as standard which includes features like a carbon roof, active rear steering, a speed-activated rear wing and a variable-ratio steering rack.

Spirited car in a not so fun environment

We got to drive the LC 500h in and around Fukuoka. It was a good mix of city driving, some highway cruising and a few mountain twisties. Unfortunately, the speed limits in Japan are quite conservative and this somewhat dampened the whole driving experience.

The LC hybrid is powered by a 3.5-litre 299PS naturally aspirated petrol engine that is combined with two electric motors that make 177PS of power. The combined max-power of this coupe is rated at 359PS, which does seem low for its two-tonne girth.

The party trick up its sleeve though is the gearbox. You get a unique combination of a stepped-CVT and a 4-speed torque converter transmission to give you ten fixed gear ratios. The power from the engine is first sent to the CVT and then to the torque converter. There are three steps each from the CVT for the initial three gears of the torque converter that give you nine ratios. While the tenth ratio is the fourth gear from the auto gearbox that acts as an overdrive.

Simply put, Lexus has gone for this ultra-complicated combo because electric motors work best with CVT while the 4-speed auto is added to nullify the CVT’s performance-sapping lag. In theory, you should get the best of both worlds - hybrid efficiency and sporty performance.

The first thing that you notice as soon as you start driving the LC 500h is just how easy it is to drive. The thin A-pillars, low dash and the relatively low window line give you excellent front visibility. Then there is the V6 hybrid powertrain that is buttery smooth. You have a dedicated EV mode too that kicks in while ambling in slow traffic or while cruising at a steady speed out on the highway. Even a slight push of the accelerator makes the V6 motor come to life, followed by an instant strong shove.

What is most impressive is how that gasoline engine kicks in. Unless you are paying close attention, you won't even realise that the LC 500h has shifted to hybrid mode and the engine seems to be in its powerband every time you need a boost thanks to 10 ratios the complicated gearbox has to offer. The gearbox works surprisingly well in all conditions, be it while cruising or in stop-start traffic, with seamless shifts and no sign of the lag typical of a CVT. In Sport or Sport+ mode, the acceleration is surprisingly strong and the claimed 0-100kmph figure of 4.7 seconds is completely believable. The gearbox does show its limitations when you shift to manual mode though, you feel some of the CVT lag when you give it the beans - the LC 500h will not be fun on a racetrack unless left to its own devices.

Although the LC 500h is a heavy car, the fact that Lexus has worked hard to lower the centre of gravity shows in the way it drives. At low speeds in Comfort mode, the light controls make it extremely easy to drive despite its size. Even during spirited driving, there is minimal body roll - in Sport or Sport+, the LC seems like a different car altogether. Making tight turns is surprisingly easy thanks to the rear-wheel steering system. While we couldn’t push the car to its limits, initial impressions of its handling are quite positive.

Then there is the ride quality, which on the not so perfect Fukuoka roads felt supple at low speeds in Comfort mode. It’s best to shift in Sport or Sport+ damper setting at higher speeds, this keeps the ride from becoming wallowy. It does feel quite stiff in Sport mode but not uncomfortably so, as the body movements are well controlled without throwing you around. Lexus has promised that the LC 500h headed to India will get structural and suspension changes to improve the ride further, better than the MY2019 model we were driving around in.

The Lexus LC 500h will be launched in India early next year and will cost around Rs 1.8 crore, ex-showroom Delhi. Compared to its main rival, the Mercedes-Benz S500 Coupe, it does lack in some aspects like rear-seat space, features and the infotainment system - but it’s quite a well-rounded tourer otherwise. It looks gorgeous, has a beautifully crafted cabin, a cosseting ride, and fun handling characteristics. It may not have the same status as a car with a three-pointed star badge or an extensive service network in the country, but the LC 500h offers style, comfort and sportiness in a package that sets itself apart. The wait will be well worth it. 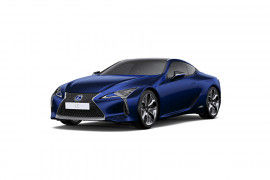 All Comparisons of LC 500h