The Renault Captur wowed us with its refreshed looks and interiors, a welcome step up from the Duster. But just how big a step up is it? ZW investigates! 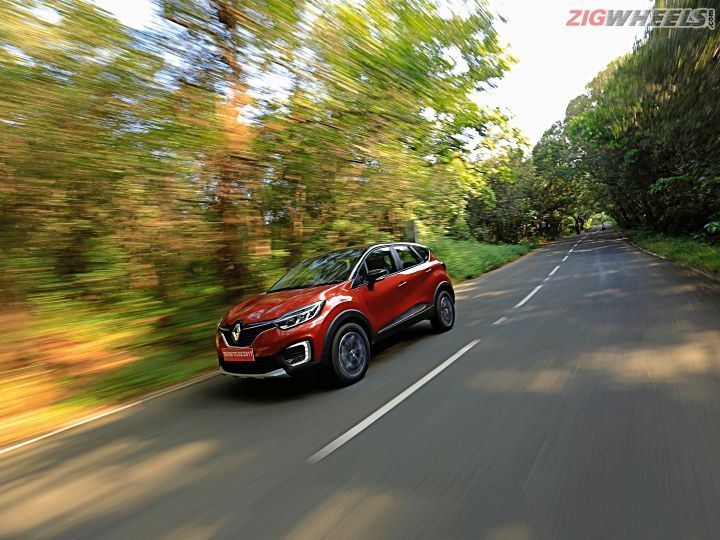 At first glance
From the outside, would you think that the Duster and Captur are related? Not quite. Renault wants to position the Captur as a more premium product than the Duster it’s based on. And we have to agree that they have done a fairly good job with the looks. The most striking angle has to be when it’s viewed head-on. The all-LED headlamps, low mounted DRLs and swooping turn indicators give the Captur a face you won’t easily forget for all the right reasons.

There are other distinguishing facets too like the crystal-cut 17-inch alloys that ensure that the Captur makes its presence felt as you ride down the road. The tastefully sculpted cladding around the lower fringes and generous 210mm of ground clearance underline its ruggedness. Renault is also offering an accessory pack that include vinyls, chrome accents and beefier bumpers to further captivate the imagination of customers.

In terms of packaging, the Captur rides on the same 2673mm wheelbase as the Duster but the overall length has increased by 14mm. It’s also shorter by 76mm (that’s mostly to do with the Duster’s roof rails) and just 9mm narrower than the Duster. Boot space has shrunk from the Duster’s 475 litres to 392 litres. One of the reasons for this is the side panelling that’s flat in the Captur and cut out in the Duster, but that alone shouldn’t account for a loss of over 80 litres. Luggage space then stands at roughly one medium-sized suitcase less than the Duster.

Better inside?
It’s when you step in that you will start to notice that not all of the Duster’s DNA has been overwritten. There are a number of nice improvements, like the curvy dash design and the plastics, which, like the Duster’s, are hard to the touch but gets a texture that lets them pass off as different. The ‘Infinity’ instrument cluster replaces the old-fashioned, three pod design and is a nice upgrade with a large digital speed readout and analogue tachometer on the left. The fuel meter has changed from a digital bar graph to an analogue readout. Like the Duster, it too drops slowly till about the half tank mark and then speeds up its dive into the red as fuel is consumed.

The Captur’s 7-inch touchscreen is the same unit that does duty across the Renault range. However, it has received a software update that allows for a faster startup. In the Captur, it’s also angled upwards ever so slightly, which makes it a little easier to glance at from the driving position as compared to the unit in the Duster. It’s fairly responsive in operation and the layout is simple if a little dated. You will, however, miss the presence of Android Auto and Apple CarPlay. Reach behind the steering wheel and you’ll feel the familiar unseen controls for music and answering calls - triggering more fond memories of the Duster.

The air con controls below the screen have also been raised up a couple of inches and are now much easier to reach. They are also closer to your line of vision, making them easier to adjust on the go. But the central vents need some ergonomic changes. The scroll button on the bottom, which scrolls left to right, actually adjusts the vertical throw of the air flow while a horizontally placed chromed knob on the slats themselves adjusts the left to right direction. It’s quite counter intuitive and we kept reaching for the wrong one when trying to adjust the direction of the flow.

The human element
One niggle that Renault have thankfully fixed is the slight rocking of the driver’s seat that still plagues other Renault models like the Lodgy and the Duster. This has, however, been replaced by a new issue for taller drivers. Both the driver's and front passenger's seats are mounted quite high up and even in the lowest setting, the driving position for anyone over 5’10” needs some getting used to. For Tushar, our oversized (6’5”) tester, the sunshade was impossible to uses as his eye line was so high up that the sunshade obstructed his vision of the road - something to keep in mind for our taller readers. The driver’s seat does adjust for reach, tilt and height (only for shorter drivers) and the steering also adjusts for tilt, so most people should be able to find a comfortable driving position.

The seats themselves are nice and comfortable. There’s good contouring of both the seat base and backrest, which makes for ample lateral and under-thigh support. The density of the cushioning makes long stints behind the wheel comfortable too. The rear bench will comfortably fit two full-sized adults with reasonable knee room. Three on the bench is also possible. However, the contouring of the seat back, the placement of the rear air con vents and the slight bump from the transmission tunnel means its best used for short distances only.

In terms of features, the Captur does tick a fair number of boxes like the 7-inch touchscreen, six-speaker sound system and climate control. In terms of safety features, there’s four airbags in the top-of-the-line Platine variant (two airbags standard) and ABS with EBD, brake assist, and hill hold assist that are common across all variants. Renault is offering the Captur with just a 6-speed manual gearbox at the moment. For a car that’s focused more at the urban customer, it could have considered adding the option of an automatic transmission into the mix as well.

There are a number of positives with the Captur. It’s a distinguished looker with good road presence and there are quite a few improvements on the inside as well. But in terms of the materials used, the space utilisation and even the touchscreen infotainment system, it’s not that big of a step up from the Duster.

The oily bits
The Captur is available with both the 1.5-litre H4K petrol and K9K diesel engines. But the diesel motor will only be offered in the more powerful 110PS/245Nm tune. And this is the motor we had on test. It’s coupled to a 6-speed manual (the petrol is paired to a 5-speed manual), but considering that the Captur is aimed at a new ‘stylish’ customer, one more likely to stick to urban environments, we feel that Renault could have considered adding in the option of its Easy R-AMT transmission as well.

At idle, the engine is quieter than in the Duster. But that’s more to do with the better cabin sound insulation than a different engine tune. On the move, you do get a fair bit of road and wind noise, but they sound a little softer when compared to the Duster. But in the city, where it really matters, the Captur doesn’t feel much more urbane. You have to get the K9K spinning up to over 1700rpm to make progress and, when combined with the heavy clutch, you can look forward to developing some strong left leg muscles if you do a lot of city commuting. One way to get around this is to hold either 2nd or 3rd gear for a little longer and then skip one gear on the upshift by going to 4th or 5th gear. This cuts down on the number of gear shifts on the smooth shifting gearbox, and if done right you should still be in the power band as well.

Out on the highway, the engine and gearbox are more at home and the Captur likes to stretch its long legs. From a standstill, it will hit the ton in 13.24 seconds if pushed hard. But once there, it’s happy to sit at triple-digit speeds all day. When cruising along the highway, the Captur returned a strong 21.09kmpl and in the city, that number decreased to 15.50kmpl.

The suspension setup feels slightly firmer than the Duster and this means that the Captur feels a little better going around corners. At highway speeds this stiffness actually keeps the chassis more composed but at city speeds, the small imperfections like level changes and ruts are heard and felt as well.
The steering feel is also great but if you push it hard through a set of corners you will feel that familiar kickback through the wheel. For a crossover SUV it’s not quite as car like to drive in the city as say the Creta for example and not quite as sporty as the looks might suggest.

Nonetheless, like it’s sibling, show the Captur a bad patch of road and be prepared to be surprised. Be it speed breakers, deep ditches from road construction, potholed roads still unrepaired from the monsoons, you can chuck the Captur through whatever you encounter and be assured that it’s going to make it through without so much as a creak or a groan.

Verdict
The new Captur is on sale now at a starting price of Rs 10.0 lakh for the base petrol variant while there are four variants of the diesel, starting at Rs 11.4 lakh and going up to 14.06 lakh for this the top end ‘Platine’ variant that we have here on test. This puts it head to head in competition with the Hyundai Creta that’s nearly Rs 50,000 more expensive. The Duster which is also in the same market space is approximately, variant to variant, 1.5 lakh cheaper.

Judging by the number of heads the Captur turned on our test, Renault seems to have certainly hit the mark in the design department. The better sound insulation, ergonomics and richer looking Interiors have managed to address some of the Duster’s shortcomings. However, it hasn’t gone whole hog either. The lack of automatic transmission options, the tiresome clutch and bumpy suspension feel in the city and the lack of a better infotainment system hurt its case. So, the Captur delivers on it’s promise of being a stylish and modern SUV, but somewhat halfheartedly.