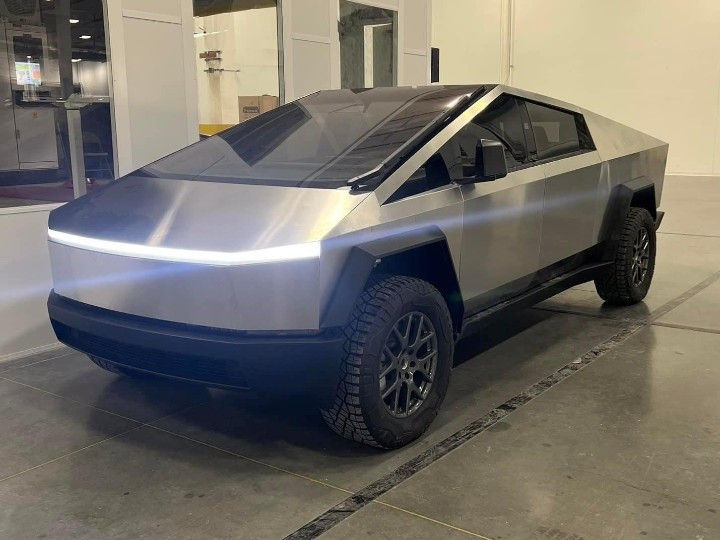 Tesla created waves for a myriad of reasons when it unveiled the Cybertruck electric pickup in November 2019 with its futuristic styling and trickery under the hood. But it's been a long wait to see it hit production. Now, it looks like we may not have to wait too long as the Cybertruck was spotted, sporting what looks like production-spec bits.

While the model in the images still retains the radical boxy design that looks straight out of Cyberpunk, there are some changes. For starters, it now gets a larger and lower bumper, and features conventional side mirrors. Even the wheels now look more realistic and along the lines of the Model 3, with chunky off-road tyres wrapped around it. Tesla claims the body is made out of 30X cold-rolled stainless steel, and armoured glass that can withstand up to 9mm ammunition.

While we’re yet to get a real life look inside, we think it’ll largely be the same as the model showcased in 2019. It is capable of seating six passengers and is decked out with features like a massive 17-inch touchscreen and Tesla’s signature autonomous driving tech.

What really grabs eyeballs for the Cybertruck is under the hood. There’s three trims (single motor RWD, dual-motor AWD, and triple motor AWD) on offer, with the entry-level powertrain giving a range exceeding 250 miles (403km) on a single charge, and the top-spec powertrain exceeding a claimed 300 miles (482km). The latter is the quickest off the line, with a 0-96kmph sprint time of just 2.9 seconds. It also gets air suspension and claims to have insane off-road and pickup truck capabilities which we’ve covered in this report.

Tesla’s configurator page had already revealed that the Cybertruck’s rollout would be delayed till 2022. So as things stand, the carmaker seems to be on schedule for the electric pickup. That being said, customers that have ordered the Cybertruck could have it delivered to them as late as the end 2022 or early 2023. This could make things difficult as Tesla claims up to 10 lakh people had booked the electric pickup.

In India, Tesla is set to begin its journey in the country with the Model 3, with the Cybertruck pretty unlikely to show up anytime soon.