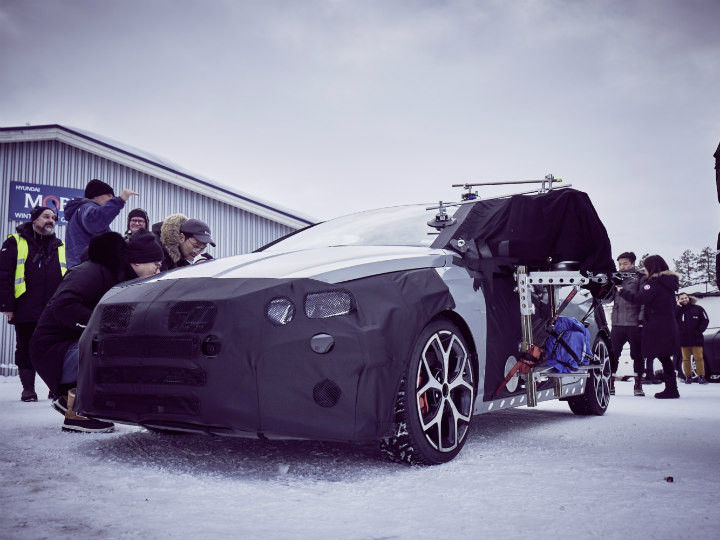 Earlier this year, Hyundai silently teased the aggressive N variant of the i20 hatchback during the international reveal of the standard 2020 i20. The car has been spied testing as well. And now, Hyundai themselves have released teaser shots of the upcoming hatchback being tested under extreme winter conditions in Arjeplog, Sweden. It was being tested alongside the RM19 and the i20 WRC by Hyundai Motorsport’s WRC driver Thierry Neuville.

While the images show the i20 N in heavy camouflage, the changes are noticeable. Aside from sporting a similar silhouette with the standard i20 some of the changes include a more aggressive front fascia, larger wheels and bigger brake discs with red brake calipers. Other exterior highlights consist of a roof spoiler covered in camouflage and a dual exhaust setup.

The standard i20 gets features like a 10.25-inch floating touchscreen infotainment system alongside a digital instrument display, Blue Link connected car tech, Android Auto and Apple CarPlay and LED ambient lighting. Expect the ‘N’ variant to feature exclusive upholstery with red accents, ‘N’ branding and minor tweaks to the pedals.

The most powerful engine in the standard i20 is a 1.0-litre T-GDi motor producing 120PS, with a mild-hybrid system and paired to a 7-speed DCT or a 6-speed manual transmission. The N variant will most likely get a more powerful motor, exclusive driving modes as well as chassis and suspension tweaks. Thierry Neuville also gave an interesting feedback on the i20N, describing it as a “very interesting car. Very precise. Very easy handling. The engine is revving nicely and the noise is very interesting as well.”

A launch timeline for the i20 N hasn’t been revealed yet, but it is likely to debut towards the end of 2020 or by early 2021. Back home, Hyundai could debut the next-gen i20 by August 2020 with a hefty premium over the current hatchback that is priced from Rs 5.60 lakh (ex-showroom) onwards. It will compete against the Tata Altroz, Maruti Suzuki Baleno, Toyota Glanza and the Honda Jazz.