The new-gen Thar’s design may be similar to the Wrangler, but does it have the off-road chops to put it within Jeep’s realm? Let’s find out 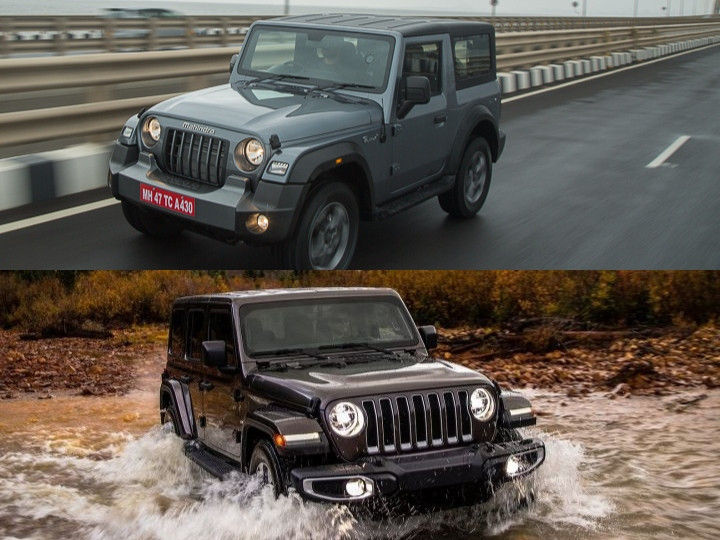 Mahindra recently took the wraps off the second-generation Thar in India with a launch planned for October 2. It’s not only larger than before but also no longer bareboned and even features an optional automatic transmission and a petrol engine for the very first time.

This isn’t the only talking point of the Thar though. Its design philosophy seems inspired by the Jeep Wrangler with a slat grille, round headlamps and boxy silhouette. That begs the question: how do their off-road capabilities compare despite the two rugged off-roaders being worlds apart. Here’s how the new Thar stacks up on paper against the Wrangler:

The new Thar is a major step up over its predecessor and is also taller than the Wrangler. But the Wrangler still comes out on top overall, especially in length (being a five-door model) and wheelbase.

While the two off-road SUVs have the same engine displacement, the Jeep Wrangler edges ahead in performance. That said, the new Thar may be more appealing to purists as it offers a traditional manual transmission, unlike the India-spec Wrangler that only comes with an automatic gearbox. Besides, the Thar is also offered with a 130PS/300Nm 2.2-litre diesel engine.

Heading to the crux of the matter: how do the two 4x4 SUVs compare on the rough stuff? The Thar gets a shift-on-the-fly low-range transfer case with three modes on offer: 2H, 4H and 4L. Other off-road highlights include mechanical locking rear differential, electronic brake locking differential, and an electric driveline disconnect function for the front axle for an easier transition from 2WD to 4WD. It also features assists like ESP with rollover mitigation, hill-hold and hill descent. Advantages over the bigger Wrangler Unlimited include greater ground clearance, better breakover angle, and a relatively similar departure angle.

The Jeep Wrangler, on the other hand, has the edge here with greater approach angle, water wading depth as well as its Selec-Trac 4x4 system. This system features an active transfer case that automatically analyses the terrain ahead and provides the ideal torque to the wheel that has the most grip. Its Smart Lock function maintains 4x4 thrills in snowy, muddy as well as rocky surfaces with drive modes for different terrains.

The new Thar is a massive step up from its predecessor and a very capable off-roader for an expected price range of Rs 9.5 lakh to Rs 13 lakh (ex-showroom). But it is still worlds apart from the Jeep Wrangler and the differences justify the massive gap in the prices, with the Wrangler retailing from Rs. 63.94 lakh to Rs 68.94 lakh (ex-showroom).