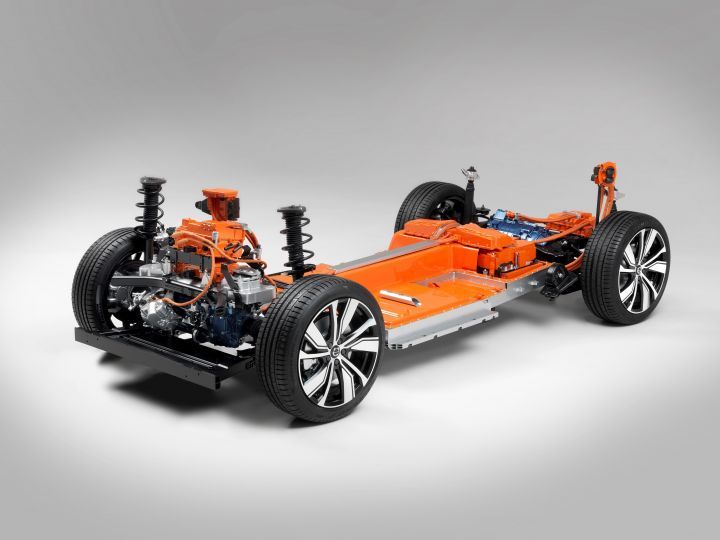 With Volvo gradually shifting its focus to EVs as per its announcement last year, the downsizing of its four-cylinder motor models is already in process. The XC40 was the first model to get the 3-pot motor. However, that’s not going to be the only thing the compact premium SUV will have a headstart in, as Volvo’s first EV will be an electrified iteration of the XC40. And now, Volvo has teased the upcoming EV under the skin before its official reveal on October 16. The change to an electric powertrain will not affect the safety levels we have come to expect from Volvo cars.

Volvo claims that the upcoming EV will be one of the safest around thanks to a reinforced front structure, made possible by the omission of the internal combustion engine. Apart from this, the floor-mounted battery will serve as a safety feature as its lower centre of gravity can help provide better protection from roll-overs. The battery pack is also housed within a safety cage made from a frame of extruded aluminum located in the middle of the EV’s body structure. This should form a crumple zone around the battery for additional safety.

Safety enhancements to the XC40 EV continue with a reinforced rear structure where the electric motor will be built into the body structure. Volvo claims that this has been done for better dispersion of collision energy away from the cabin. This will reduce the collision forces felt by passengers inside the cabin, thus lowering the risks of serious injuries.

While current Volvos are already the top dogs of safety with their plethora of airbags and electronic assists including Electronic Stability Control, Roll Stability Control,Driver Alert Control and Cross Traffic Alert System, the XC40 Electric will go a step further. Some upgrades include newly developed Advanced Driver Assistance Systems (ADAS) consisting of radars, cameras, and ultrasonic sensors that will rely on a software created by autonomous driving tech developer, Zenuity.

Further details about the upcoming EV will be revealed by the carmaker in the coming weeks before it makes its international debut. The current XC40 in India is sold at a price tag of Rs 39.90 lakh to 43.90 lakh. It is unlikely that the EV iteration will make it to India anytime soon as only the diesel variants are sold in India. It currently rivals entry-level German luxury SUVs like the BMW X1 and Audi Q3.