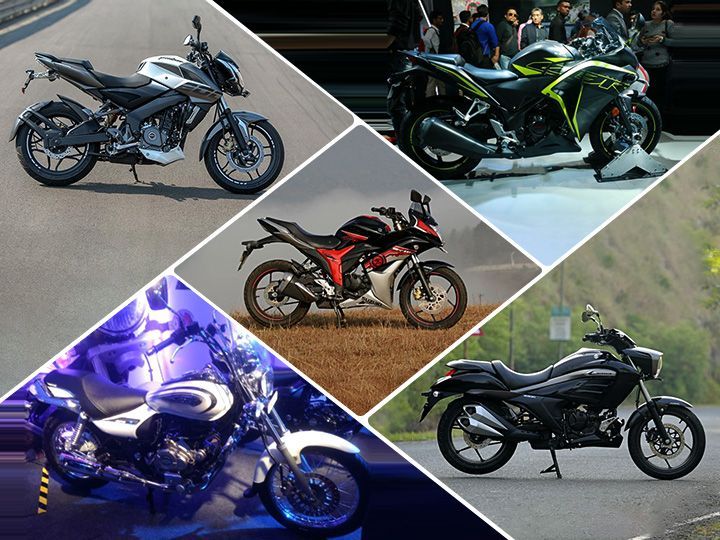 As the number of two-wheeler enthusiasts grow in the country, so do their demands. Motorcycles are now more than just a convenient means of transportation. The touring segment, in particular, has witnessed a considerable rise in popularity thanks to capable motorcycles packed with highway-worthy versatility. However, affordability continues to be extremely crucial for many two-wheeled thrill seekers. That’s where tourers with engines that displace less than 250cc make perfect sense. Here’s a list of five motorcycles that are not only affordable but reliable and cheap to run as well.

The Honda CBR 250R may be a bit long-in-the-tooth and also the most expensive motorcycle of the lot. However, it is arguably the best choice from its segment for long distance touring. When it comes to a product that offers a fine balance of comfort, performance and reliability, nothing comes close to the Honda. Since its launch in 2011, this motorcycle has been the staple choice of riders who were looking for a no-nonsense sports tourer. However, Honda had to halt its production last year owing to the transition from BSIII to BSIV norms. Things turned around in March this year, as the bike was resurrected with BSIV compliance and an LED headlight.

Fortunately (or unfortunately, if you’re craving for more performance), the tried-and-tested powertrain and mechanical underpinnings are unchanged. Working in unison with a 6-speed gearbox, the 249.6cc single-cylinder, liquid-cooled engine makes 26.3PS at 8500rpm and 22.9Nm at 7000rpm. The comfortable ergonomics and the adequately powerful engine help the bike sustain triple-digit speeds effortlessly. We’d recommend the ABS variant, which is a lot safer and costs Rs 1,93,666 (ex-showroom Delhi).

The Suzuki Gixxer SF is one of the best all-rounders in its segment. Its wind-tunnel tested fairing helps in keeping wind-blast at bay, and the fairly upright ergonomics make short work of highway jaunts. Moreover, its butter-smooth 155cc air-cooled motor enables the motorcycle to cruise comfortably at around 90kmph in fifth gear. The engine produces 14.8PS at 8000rpm, and 14Nm at 6000rpm.

The throttle response is crisp thanks to fuel injection, and the single-channel ABS assures safety in case things get hairy. The Gixxer SF FI ABS bears a price tag of Rs 96,386 (ex-showroom Delhi).

The Intruder 150 is Suzuki’s first attempt at a budget cruiser in the country. As its name suggests, the motorcycle’s design is based on its elder brother, the Intruder M1800R. However, the bike looks a tad ‘eccentric’ to say the least. However, it grabs attention wherever it goes. The long wheelbase, low seat and easy-to-reach handlebars make it a potent mile-muncher too.

The slightly-tuned Gixxer-based engine gives out a relatively better response at low revs than its naked counterpart. The engine is good for 14.14PS at 8000rpm and 14Nm at 6000rpm, and works in conjunction with a 5-speed transmission. The single-channel ABS also adds a layer of safety to your riding experience. Speaking about its pricing, the Intruder 150 will set you back by Rs 1,06,896.

The Avenger has been in the market for quite a long time and is still one of the best choices for long-distance riding. Its American-style swanky demeanour makes it a perfect companion for the highways. Also, the oil-cooler in the 220cc DTS-i engine ensures stress-free riding. The Cruise variant comes with ‘Highway Comfort’ handlebars which optimises the ergonomics for long-distance riding. Additionally, the windshield will reduce fatigue due to wind-blasts, and the pillion seat features a cushioned backrest, enhancing passenger comfort by a considerable margin.

The Pulsar NS200 was Bajaj’s answer to the mad KTM 200 Duke. Compared to the Duke, the NS200 has a more mellow character, with gearing that’s suitable for highway riding. The bike’s comfortable ergonomics and surefooted dynamics make it a hoot to ride over the twisties and on the highways alike.

The motorcycle draws power from a 199.5cc single cylinder triple-spark DTS-i engine with liquid cooling and fuel injection. A peak power of 23.5PS comes in at 9500rpm and the maximum torque of 18.3Nm arrives at 8000rpm. The price for the Pulsar NS200 stands at Rs 1,11,411 (ex-showroom) for the single-channel ABS variant.