India-bound Skoda Kodiaq Gets Sportier With Its Mid-life Refresh 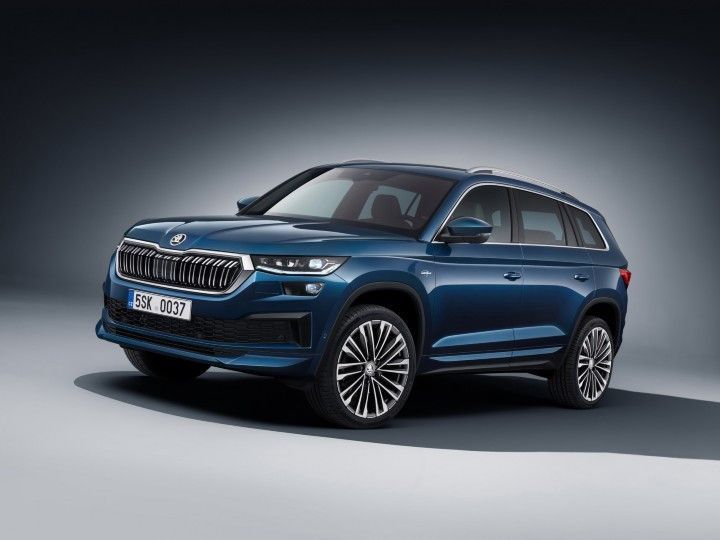 After a short teaser campaign, Skoda has finally given the Kodiaq SUV a mid-life refresh. And it’s a pretty decent upgrade, with sharper exteriors, more tech on offer and a variety of powertrains propelling the SUV. What’s more, Skoda Auto India’s Director of Sales, Service and Marketing, Zac Hollis, has confirmed that the India-spec model will continue to be a completely-knocked-down (CKD) unit.

The Kodiaq has gotten sportier now, especially up front, where there’s a new bonnet, and a grille that is  wider and more upright than before. Complementing that are slimmer LED matrix headlights with a nice crystalline effect and a wider central air intake with L-shaped elements.

Heading over to the sides, the beltline blends in nicely with the new clamshell bonnet. At the rear, the roof lip spoiler is longer, and the taillights slimmer. They also feature a crystalline effect like the headlights. A new range of 18- and 20-inch alloy wheels round off the exterior upgrades.

The cabin is relatively similar to the pre-facelift model, but gets new decorative stitching on the dashboard, front door inserts and door panels. The Kodiaq now gets optional ergonomic ventilated seats that can be heated, and offer a massage function. LED ambient lighting now extends to the footwell with 10 colour options. The Kodiaq can also be availed with a two-spoke steering wheel, with a three-spoke design optional for the Spotline and RS variants. Even the CANTON sound system has been upgraded to a 12-speaker unit instead of the 10-speaker setup from before. Key features such as a panoramic sunroof, three-zone climate control, and electric seats with memory function have been retained.

Under the hood, the updated SUV is powered by a range of petrol and diesel engines. The petrol units consist of a 1.5 TSI producing 150PS and a 2.0 TSI motor delivering 190PS. Two 2.0 TDI engines make up the diesel lineup delivering 150PS and 200PS. The 1.5-litre TSI petrol is exclusively front-wheel drive, and can be paired with a 6-speed manual transmission or 7-speed DSG.

The 2.0-litre TSI gets all-wheel drive as standard and is paired to a 7-speed DSG. Both diesel engines get the 7-speed DSG, but the 150PS variant can also be availed with front wheel drive. The spicier Kodiaq RS gets a new 2.0-litre TSI petrol motor making 5PS more than it’s biturbo diesel predecessor at 245PS, paired with a 7-speed DSG.

Back home, it will be powered by the 190PS/320Nm 2.0-litre TSI turbo-petrol engine that is shared with the Volkswagen Tiguan Allspace. It is paired to a 7-speed DSG transmission that distributes power to all four wheels.

We haven’t seen the Skoda Kodiaq since its 2.0-litre TDI diesel didn’t get the BS6 upgrade in April 2020, and was hence discontinued from the lineup. But the facelifted model will arrive in the second half of this year. Prices could start from Rs 33 lakh (ex-showroom, India). Rivals will include the Volkswagen Tiguan Allspace, Citroen C5 Aircross and the petrol-powered Toyota Fortuner.