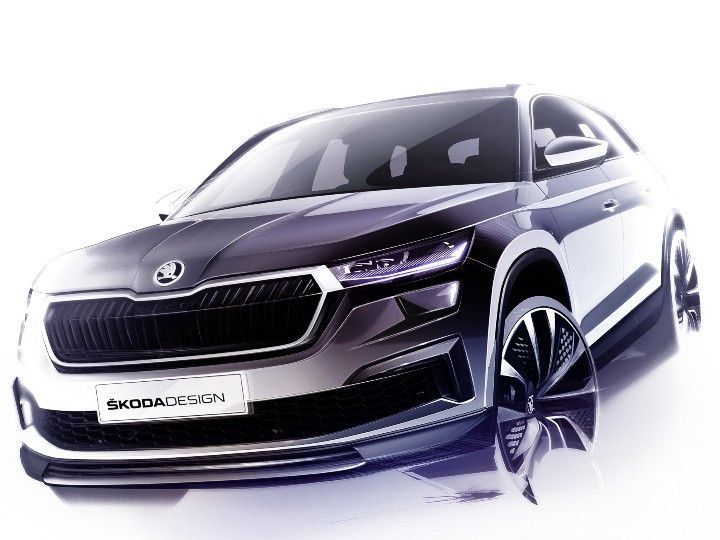 We haven’t seen the Skoda Kodiaq for quite a while in the country since its 2.0-litre TDI diesel didn’t get the BS6 upgrade in 2020, and was hence discontinued from the lineup. But it's set to return to the country soon as the Czech carmaker has released design sketches of the facelift and will make its global debut on April 13. It's also confirmed that it’ll arrive in India later this year. Here’s what the design sketches hint at what updates to expect for the Kodiaq.

Up front, the grille is a bit more upright, and wider than before, that’s complemented by a slimmer pair of LED headlights,with fog lamps below the headlights being retained. The central air intake is wider than before and gets L-shaped aluminium inserts for that little extra sporty quotient. At the rear, the taillights have been slimmed down, with some tweaks to the internals. Expect the overall silhouette to remain largely unchanged since it's a facelift.

The cabin is likely to remain similar to the pre-facelift model albeit with new upholstery finishes. The most notable upgrade is likely to be the infotainment system, with features such as three-zone climate control, a panoramic sunroof, and electric seats with memory function to be retained.

Powertrain details are yet to surface, but we expect the updated Kodiaq to be powered by petrol, diesel and hybrid engine options overseas. Back home, it will be powered by the 190PS/320Nm 2.0-litre TSI turbo-petrol engine from the Volkswagen Tiguan Allspace. This engine is paired to a 7-speed DCT transmission that distributes power to all four wheels.

A definitive timeline for the 2021 Kodiaq facelift’s India launch hasn’t been revealed, but it's likely to happen by mid-2021. Prices could start from the Rs 33 lakh (ex-showroom, India) mark which is similar to the Volkswagen Tiguan Allspace. Aside from the Tiguan Allspace, it should go up against the petrol powered Toyota Fortuner.