Facelifted Skoda Kodiaq Spotted In India Ahead Of 2021 Launch 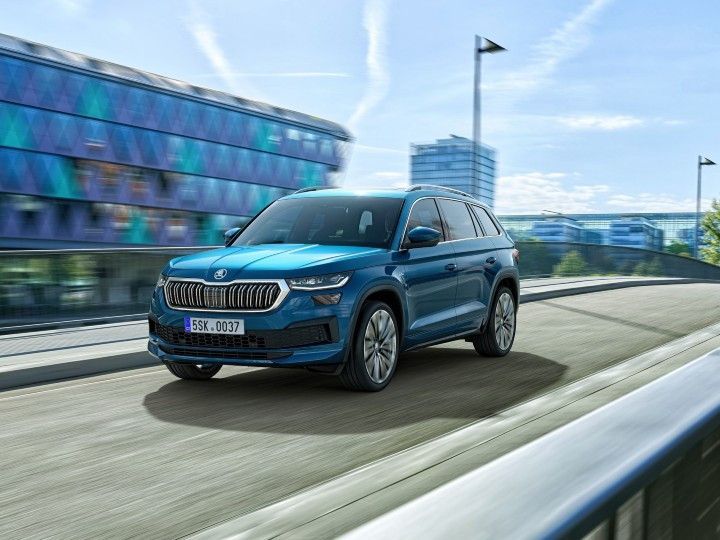 We haven’t seen the Skoda Kodiaq in India since its 2.0-litre TDI diesel was discontinued in April 2020 during the transition to BS6 emission norms. The facelifted SUV unveiled globally in April this year was spotted recently in the country, indicating an imminent launch.

The model snapped here is the Kodiaq’s ‘Sportline’ trim, which comes with a wider, blacked-out front grille, a redone bonnet, slimmer LED matrix headlights with a tasteful crystalline effect, and a wider central air intake with L-shaped elements. Other changes include a new range of 18-20-inch alloy wheels, a beltline that blends nicely with the new clamshell bonnet, slimmer taillights, and a longer roof lip spoiler.

Look inside, and you’ll find a three-spoke steering wheel, which is optional in the Sportline and RS trims. Overall, the cabin is largely similar to the pre-facelift model except for the new decorative stitching on the dashboard, front door inserts, and door panels.

New features come in the form of footwell LED ambient lighting with 10 colour options, a 12-speaker CANTON sound system (instead of the 10-speaker setup previously), and optional ergonomic ventilated seats with heating and massage functions. Features that have been retained include the three-zone-climate control, panoramic sunroof, and electric seats with memory function.

While the Kodiaq sold abroad gets multiple petrol and diesel powertrains, the India-spec model will be powered by the same 190PS/320Nm 2.0-litre TSI turbo petrol engine as the Volkswagen Tiguan AllSpace. It is paired with a 7-speed DSG that drives all four wheels.