An interesting, if flawed, take on a compact device most serious touring riders would do well to have in their essential gear 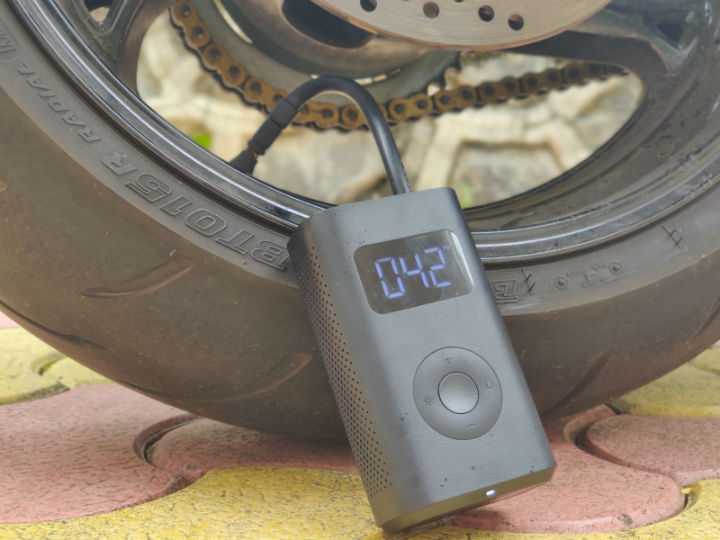 As a fairly prolific solo long-distance touring rider, you rapidly realise that relying on yourself when in trouble is a matter of how prepared you are. The more prep you do, the less the chances of getting in trouble. So while I normally have a set of spares and tools in my bags, the fact of the matter is, I have rarely needed to use them.

But riding thousands of kilometres by yourself means that air is vital and not just to breathe. So, an air compressor, puncture kit and tyre pressure gauge were rapid additions to my essentials. And because they go on motorcycles, all of these have to be as compact and lightweight as possible.

The newest air compressor on the market seems to be this, the Mi Portable Electric Air Compressor, to give it its full handle. I'll just call this the MPEAC for the rest of this article. We received a review unit a few days ago and I've played around with it, even re-inflating a neighbour's motorcycle's tyres from zero up to recommended pressure. Let's look closer.

An air compressor is a small machine that pressurises air. For our application, it uses the pressure to fill tyres, and can also be used with adaptors for basketballs, soccer balls, etc. The MPEAC's compressor is powered by a 2000mAH battery that you can charge over USB, a charger is not included but the cable is. You also get adaptors for bicycle tyre valves and the pin adaptor you need for balls in the package.

The compressor unit itself is a nice-looking black plastic rectangle with vents on both sides for the heat that all compressors generate and an extremely iPod-like combination of a screen with large white letters and a 'rotary dial' which has four buttons and a central on-off switch. At the bottom is an LED that's white when above 50 percent charge, orange between 50 and 20, and red below 20. On top is the short rubber tube with the screw-on valve that you would connect to the tyre's valve. Pulling the tube out of the receptacle turns the MPEAC on and plugging it back in turns it off.

There is a small LED light on top that you can turn on with the 'dial' to illuminate the area if required. The dial obviously had plus and minus buttons to set pressures and four presets which change pressure and units to suit bicycles, cars, motorcycles (strangely with a scooter icon) and balls. Pressure is reported in Bar or PSI and when you connect the device to a tyre and turn it in, the MPEAC will report the current tyre pressure. You can set the intended pressure and it has an auto cut off. The accuracy of the measurement is 2PSI plus or minus.

It's a good-looking device and at approximately 500g, it isn't the lightest device on the market but it isn’t unduly bulky either. Portable compressors are never lightning quick and the MPEAC is no different. It took just under 13 minutes to take a 180-section rear tyre from no air at all (thanks lockdown) to its recommended 36PSI, which is reasonable. Topping up my bike, both tyres, 6PSI below recommended, took about 4-5 minutes each, which I think is acceptable.

Connecting the MPEAC to the tyre is easy -- the screw-on cap is well-made and I lost very little air when releasing the tube, which is excellent. Most of the other units I have used usually lose 1-2 PSI as the tube is released because the mechanism isn't this well-made.

The MPEAC also seems to heat up less than my other units and it seems to be a bit quieter as well although given what it is for, neither of the two should be parameters to make a purchase decision.

Since I normally charge overnight before a tour, I don't have a number in terms of how fast the device charges but as you will see, the battery features heavily on the negatives of the product for me.

What Can be Improved

For a device that is supposed to be backup equipment in an emergency, I think the three-step battery state indication isn't enough. I would definitely like to know whether my device is fully charged or not at a glance. While charging this is communicated by the LED which pulses while charging and is a steady white at full. But after this, there is no way to know how much charge has dropped by as you use it. In my case, using the device for about 25 minutes (two top-ups and one zero to 36PST inflation), dropped the charge below 50 percent. Again, I don't know if that was 49 percent or 21 percent.

The tube is also a matter of concern. It seems well made but the lock-like form factor means that the tube will definitely be exposed to pressure damage inside luggage once packed. This would worry me. And these tubes are part of how devices like these read the pressure in the tyre to determine where the cut off is. I've had a tube pinched on another device that raised its pressure read (so instead of reporting 26PSI, for instance, it falsely registers 48PSI) count so high that I could never override it and get it to fill a tyre again.

The presets are only useful if your vehicle happens to use the pressure pre-programmed in. It doesn't remember any adjustments you make and in that sense, the preset button seems to work more as a way of changing units than making inflating tyres more convenient.

But my biggest grouse, and the reason why I would probably hesitate to recommend this outright to you, is that the MPEAC does not support pass through charging. Which means it cannot be used to inflate tyres while it charges. So either you bring a charged device or you wait on the side of the highway while the battery pack juices it up, which is quite silly. I have used air compressors with in-built batteries as well as without them and I find that the vehicle's battery is the most trustworthy source of power, backed-up as it is by your vehicle's engine.

Also Read: COLUMN: Riding Better: How to use your body to make the motorcycle lose weight

My Rs 990 ResQTech equivalent is slightly larger to pack down, but since it uses the bike for power, it can inflate a whole fleet as long as I don't overheat the device. The MPEAC claims 5 bike or car tyres on a charge but with my experience (and the lack of battery indications or charge times) I would not trust it implicitly. I certainly would not go around the parking lot deflating tyres fully and re-inflating them to find out. But, realistically, the chances that you will run out of air completely on five tyres simultaneously is improbable, so this is more of a documentation issue than a use issue.

The MPEAC is Rs 2,299 on store.mi.com. It seems to be a crowd-funded device and you can't rock up to Amazon to buy one, like you could in the US for example, which is kind of strange. My initial review on Instagram immediately produced a flood of interest followed by angst -- it was mostly unavailable and many who had already paid for it were now waiting for shipped units to reach them. On the availability front, the product will be available for purchase on Mi.com, Flipkart and Mi Home stores starting 25th August, 2020.

On its own, the MPEAC is a neat little device which does most of what it promises. It is certainly the most attractive of the devices you can buy today and possibly (hopefully temporarily) also the hardest to get.

My suggestion would be to see what's out there, and there are several generic products out there. Thankfully, portable compressors aren't a new category or a new invention so many of them work really well. The MPEAC is very nice to use but I would shop around before I decided on it.