Porsche Lets Instafam Have The First Peek At The 2020 911 Turbo! 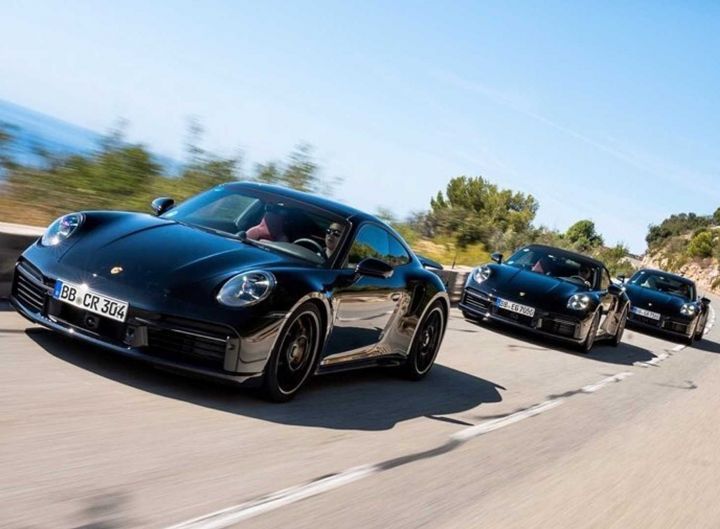 The 911 Turbo has come a long way transitioning from its widowmaker image (930 Turbo) to an everyday supercar that is also absurdly fast. Porsche launched the latest 992 generation 911 almost a year ago and we’ve all been waiting for its sinister versions such as the Turbo, and the GT. Thanks to spy shots from the Nurburgring, it was no secret that Porsche had been actively testing the 992 911 Turbo and the GT3 versions. Now, Stuttgart has officially revealed photographs of the three 911 Turbo prototypes during a development drive in Nice, France.

Images of both the coupe and cabriolet versions were revealed by Porsche while the German carmaker also stated that the launch will happen sometime next year. Porsche factory test driver Joerg Bergmeister was also present during the drive implying that the cars were undergoing final stages of testing and calibration. According to various reports, the Turbo and Turbo S will deploy a twin-turbo 3.8-litre flat-six engine that gains bigger turbochargers and an improved catalytic converter design. These changes also mean that the Turbo S will most probably produce around 641PS of maximum power and close to 800Nm of peak torque. If this turns out to be true, we are looking at a hike of 70PS and 100Nm of twist over the 991 911 Turbo S (570PS/699Nm).

Even more so, these figures will make the new Turbo S more powerful than the outgoing version of the 997 GT2RS and just 40PS shy of the most-potent 911 that you can buy today - the 991 GT2 RS.  An 8-speed PDK gearbox will take care of the transmission duties to all four wheels. Considering the bump in output figures, the upcoming 911 Turbo might also sprint from 0-100kmph run in 2.5 seconds, ultimately, reaching a top speed of 330kmph.

Apart from the obvious 992-gen styling changes, the Turbo is also likely to feature goodies such as a rear wheel steering, Porsche’s Active Suspension Management, and a massive  ten/eight-piston calliper carbon-ceramic brakes. Porsche will also offer a staggered 20-inch wheels for front and 21-inch for rear along with aerodynamic bits like the large wing and a new front splitter.

In the meantime, we are waiting for Porsche India to bring in in the all-electric Taycan next year. At present, Porsche offers the 992 911 in Carrera and Carrera S versions priced from Rs 1.62 crore to Rs 1.99 crore (ex-showroom). Given the fact that India is a strong market and the German carmaker even launched the hardcore GT2 RS here, we will likely get the latest 911 Turbo soon after its global debut.

In other news, Porsche’s profit increased to EUR 3.52 billion from January 1 to September 30, 2019, compared to EUR 2.67 billion last year helping them register a growth of 32 per cent.