TVS is all set to relaunch the Victor commuter bike in the Indian two-wheeler market. The new TVS Victor has been caught testing prior to its official launch by mid-2015 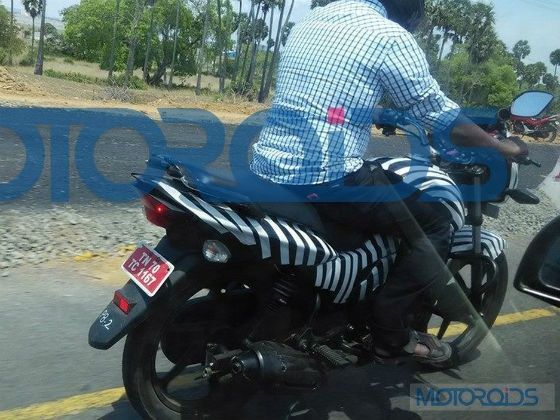 With the new TVS Star City+ and the Scooty Zest already on sale, TVS will not shift its focus to bring an updated version of its best-selling commuter, the Victor. The Hosur based bike maker had revealed its plans of introducing the new TVS Victor at the Star City+ launch last year. Pictures of the upcoming TVS Victor being tested have been posted by Motoroids. From the heavily camouflaged bike one can make out that the design of the bike will be based on the TVS Star City+. The only major design detail being the fact that the bike features a restyled stubby exhaust muffler.

The riding position is that of a typical commuter – upright and comfortable. Braking on the bike will be done by drum brakes at front and rear. The new TVS Victor is expected to sport the same 109cc EcoThrust engine that we have already experienced on the Star City+. In fact it will also be based on the same platform but will be placed above the Star City+. That said, TVS exact details of the new Victor are still sketchy but considering its product placement, expect it to come with additional features.

The Victor was what for TVS as the Splendor is for Hero and was among the top selling entry level motorcycles in the market for its combination of decent power and fuel efficiency. But TVS wasn’t able to hold the sales of its bread and butter motorcycle as it faced lot of quality issues and with rival brands launching better offerings in the segment it had to be discontinued. TVS will be vary of these facts and will be cautious not to repeat the same mistakes as it did in the past. Also given the fact that its recent launches like the TVS Jupiter, Scooty Zest and the Star City+ have been impressive offerings, the future looks bright for the Victor. Watch this space for more updates.