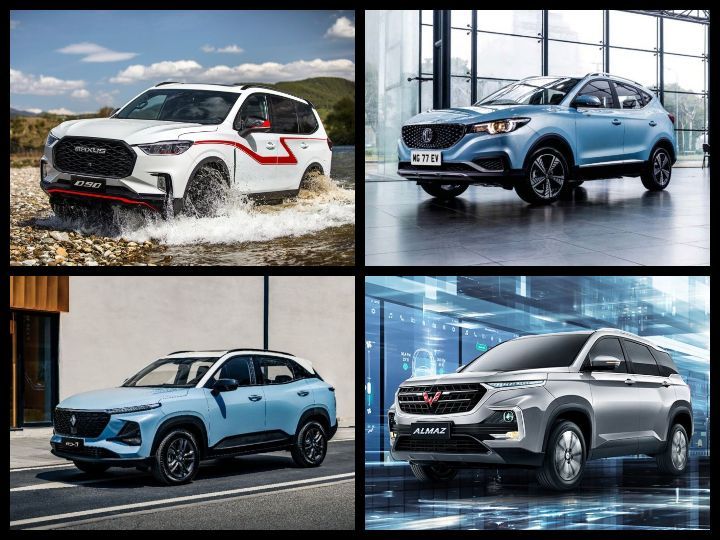 MG Motor India is set to go all-out with four new SUVs slated for launch in the coming months. The Chinese-owned British brand is currently riding a wave of success with the MG Hector midsize SUV and is all set to unveil the ZS electric vehicle (EV) on our shores in January. Morris Garages will also bring in the 6-seater and 7-seater version of the Hector connected SUV while the Baojun RS 3 that has been launched in China could be rebadged and sold in India to rival the Kia Seltos and Hyundai Creta. Meanwhile, the carmaker has started testing the Maxus D90, a full-sized SUV that will take on the likes of the Toyota Fortuner and Ford Endeavour. SAIC along with Changan and Great Wall Motors look to be preparing a Chinese onslaught of SUVs in the Indian market starting from Auto Expo 2020. Meanwhile here’s all you need to know about MG’s SUV plans for India.

The ZS EV will be MG Motor’s second SUV for India. It will debut on December 5 and be powered by an all-electric motor that develops 150PS and 350Nm. The ZS EV draws juice from a 45.2kWh battery pack that helps it offer a range of 428km on a single charge (NEDC claimed). Noted features include connected car tech, single zone climate control with PM 2.5 AC filter, an 8-inch infotainment system, Android Auto and Apple CarPlay, cruise control as well as a multi-info display. MG will launch the ZS EV in January 2020 across five cities initially: Delhi-NCR, Hyderabad, Mumbai, Ahmedabad and Bengaluru. Select dealers have already started accepting bookings for a token of Rs 50,000.

The MG Hector midsize SUV is all set to get a six-seater and seven-seater version in India. The seven-seater version has been launched in Indonesia as the Wuling Almaz. Meanwhile, the six-seater version will come with individual captain seats for the middle row. The inclusion of third row in both models means that the 587-litre boot space could take a toll. Apart from that, they are expected to come with slightly revamped styling to differentiate them from the 5-seater Hector. It’s expected to come with the current set of petrol, diesel and mild-hybrid powertrains found in the Hector. MG could showcase the Hector 6-seater and 7-seater at Auto Expo 2020 and might launch them in mid-2020.

The Maxus D90 has been spotted testing in the country and will be MG’s answer to the Toyota Fortuner and Ford Endeavour. Maxus is part of the SAIC group (which also owns MG) and the D90 will be rebadged for India. The D90 is much bigger than the Toyota Fortuner and Ford Endeavour. Noted features include a 12.3-inch infotainment system, digital instrument display, cruise control, automatic emergency brake system as well as blind spot detection. Under the hood, the D90 comes with a 2.0-litre turbocharged petrol engine that develops 224PS of power and 360Nm of torque. It can be had with either a 6-speed manual or a 6-speed automatic gearbox. Naturally, being a full-size SUV, it comes with a four-wheel drive option as well. We expect the India-spec model to come with a diesel engine as well. MG could showcase the Maxus D90 at Auto Expo 2020 and we expect the carmaker to reveal further information at the event.

Baojun recently launched the RS-3 midsize SUV in China with a price tag of RMB 71,800 (Rs 7.2 lakh). It could be rebadged as a MG SUV to take on the likes of the Kia Seltos and Hyundai Creta. The RS-3 is a tad smaller than the Kia Seltos. However, its design is a bit reminiscent of the Hector. Inside, the RS-3 comes with a floating infotainment system while the design of the AC vents mimic the Audi Q7. Features include connected car tech, single zone climate control, adaptive cruise control, digital instrument display as well as a Bosch-sourced driving assistance system. The RS-3 comes with a 1.5-litre petrol engine that develops 105PS and 135Nm. It can be had with either a 6-speed manual or CVT. Expect MG to showcase the Baojun RS-3 at Auto Expo 2020 with further information expected to be revealed at the event.

Planning to get one of these MG SUVs? Let us know in the comments section below.