We take a look at what has changed over the years: 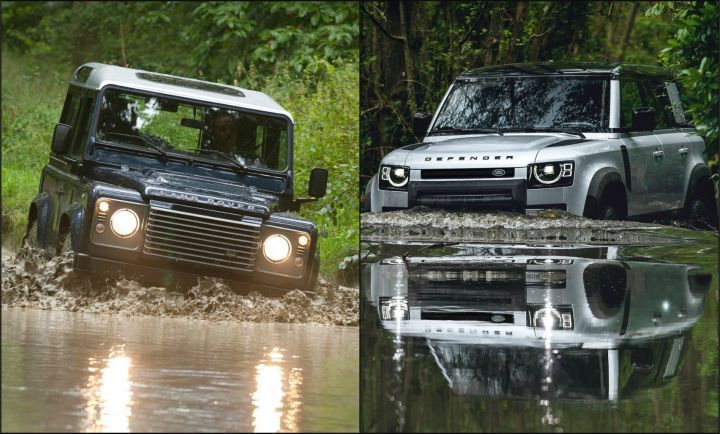 Land Rover has revived the iconic Defender after a brief hiatus of seven years. The new L663 Defender carries over the old legend’s charm while also being an all-rounder. The old Defender was renowned for its off-road credentials and understated looks, while the new one addresses that area with more flair. Here is a brief comparison to see what all has changed over the years:

The old Defender has a no-nonsense rudimentary design with an imposing stance and wide wheel arches. The 2020 Defender takes a different approach while also maintaining the quirks of the old one. It also gains modern LED headlights while sporting a more sophisticated design language.

Coming to the sides, we are happy to report that the latest iteration of the Defender has retained the Alpine window mounted up top. It also retains the boxy wheel arches and large windows. The air intake on the fenders have also been carried over, although they have now grown in size. But, you won't find any exposed door hinges like in the old Defender anymore.

The old Defender got a barebone design at the rear with small round-shaped tail lamps. The new Defender, on the other hand, gets an eccentric design with square LED tail lamp units complete with a spare wheel. Look closely and you can see the similarity in the overall shape between the two brutes.

This is where the 2020 Defender sees some major upgrades; the cabin no longer looks basic as it now sports all the modern creature comforts complete one could think of, including a 10-inch infotainment system. The new Defender also gets a 12.3-inch digital instrument cluster and a four-spoke steering wheel with a plethora of controls. What’s common among the two SUVs, though, are the large size of the ergonomically-positioned controls.

The oldie used a slew of engine options which ranged from a 2.2-litre diesel to a 5.0-litre Jaguar-sourced V8 petrol (Defender Works). Also interesting is that during BMW’s ownership of Land Rover, the Defender used the M52 inline-six petrol that is also found under the hood of some BMW sedans. Other notable engines offered were a 3.9-litre Rover V8, two Ford’s Duratorq turbo-diesels, etc.

Comparing the features of both the SUVs would be futile as, let’s face the fact, the old Defender was too long in the tooth by the time it was discontinued and basically the same SUV from the time most of us were born. Nonetheless, Land Rover has got back into the game with the new Defender which looks promising, at least on paper. Out in the real world, the 2020 Defender will have to fight it out with its arch nemesis from the US - the Jeep Wrangler.