While it is based on the two-door 2020 Jeep Wrangler Rubicon, there are some distinguishing elements on offer 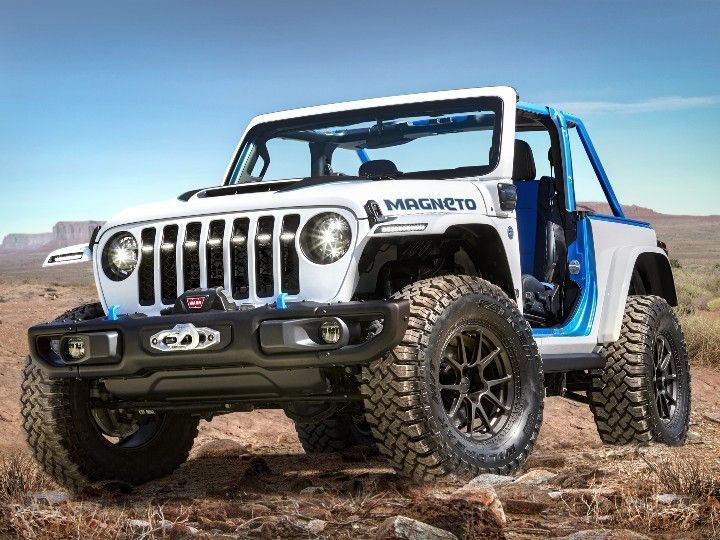 After a teaser image earlier this month, Jeep has finally revealed the Magneto EV concept, giving us a sneak peek into the first-ever fully electric Wrangler. It will debut alongside three other concepts at the annual Easter Jeep Safari in the USA. If you thought going electric would dampen the Wrangler’s off-road prowess, you’re mistaken. Going by the concept, it seems like we are in for an enhanced 4x4 experience from Jeep.

Under the hood, the Magneto is powered by a custom-built axial flux electric motor that produces 285PS and 370Nm. That’s a decent match for the 3.6-litre Pentastar V6 motor. What’s more? There's a six-speed manual transmission as well, a unique thing to have in an electric vehicle. All these help the off-roader go from 0-97kmph in 6.8 seconds.

Juicing up the electric motor are four battery packs with a combined capacity of 70 kWh, running an 800-volt system. For those worried about how the Magneto will fare in wet conditions, know that the batteries are water-resistant to maintain the Wrangler’s 30-inch water-wading capacity.

The exterior design is similar to that of the two-door Wrangler Rubicon, with the ‘Magneto ‘badge at the same spot (on the hood) as the Rubicon. There’s also a big hood scoop similar to that of the V8-powered Rubicon 392, the most powerful Wrangler at 470PS. Another feature that catches your attention is the LED light bar behind the seven-slat grille. The blue accents all over complement the white body shade.

Jeep has also provided some off-road-specific features so that the Magneto feels better-equipped for the elements. These include a JPP 2-inch lift kit, 17-inch metallic wheels with 35-inch mud-terrain tires, a custom roll cage, Mopar Rock Rails, steel bumpers with a winch, and a steel belly pan.

Jeep remains tight-lipped on details about the production-spec Wrangler EV, but we do know that it’ll continue with its body-on-frame philosophy and an all-wheel drivetrain. Expect the production-spec model to debut later this year or by early-2022. As for India, Jeep recently launched the locally assembled Wrangler. The carmaker is also working on a new 7-seater SUV and the locally assembled next-gen Grand Cherokee.