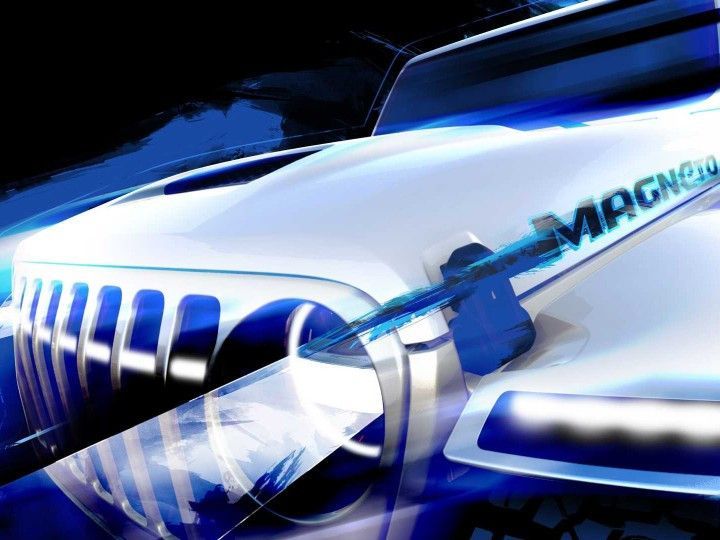 Jeep’s annual Easter Jeep Safari event is well known for cool concepts being unveiled as well as some off-road thrills. Now, Jeep has given a glimpse of what to expect for the 2021 edition by teasing two concepts. The highlight of the two is the concept version of the upcoming first-ever pure electric Wrangler off-roader.

The concept model in question, called the Magneto, sports its name at the same spot on the hood as the Rubicon. So, Jeep’s electric Wrangler could have the Wrangler Magneto nomenclature in production form. Elsewhere, you notice a big hood scoop that’s similar to the most powerful Wrangler yet -- the V8-powered Rubicon 392. There’s also an LED light bar behind the traditional seven-slat Jeep grille that lines up nicely with the headlights.

Details on the Wrangler EV continue to be scarce, but it will retain its body-on-frame SUV philosophy and drive all four wheels. Three battery modules will juice up the electric motor, which should help it offer a decent driving range.

Jeep will be leaving no stone unturned for charging solutions especially in the wilderness, with solar-powered chargers on motorways, and off-road locations such as Moab in Utah and the Rubicon Trail in California, USA.

Expect the production-spec iteration of the Jeep Wrangler to make its debut later this year. Back home, Jeep is preparing to launch the locally assembled Wrangler on March 15. As a result, prices could be slashed all the way down to Rs 40 lakh (ex-showroom). It competes with the likes of the Mahindra Thar and Land Rover Defender.