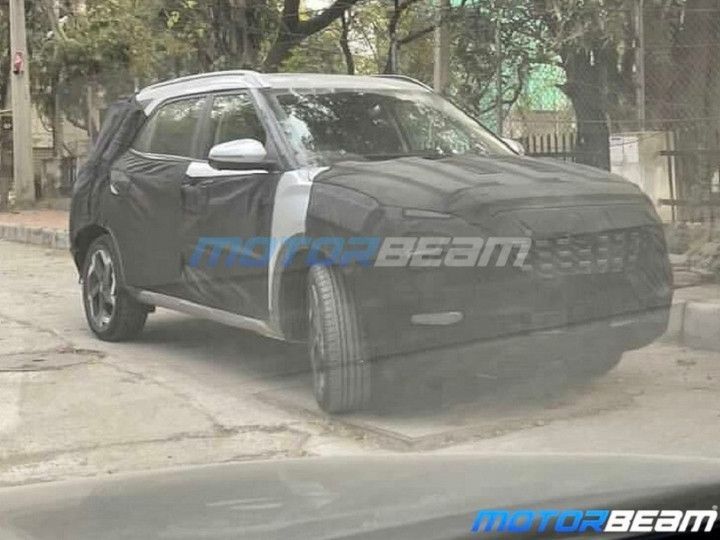 It’s no secret that Hyundai has been preparing to introduce a 7-seater version of the Creta for some time now, with the SUV first being spotted in India back in December 2020. It could be named the Alcazar as the carmaker registered this name last year. The SUV has now been spotted again, revealing more details of the three-row SUV.

While the test mule still sports heavy camo, it gets bits that make it stand out from its 5-seat counterpart. Up front, it retains the split-headlamp setup, but the grille gets studs in place of slats. Heading over to the sides, the changes are more pronounced with a different set of dual-tone alloy wheels, longer rear overhang as well as a large rear quarter glass. Previous spy shots already revealed a revised rear-end with a different set of tail lamps. The biggest change, of course, will be its overall length, which could be 30mm longer than the 5-seater Creta (4,300mm). It could also have a larger boot space than the standard Creta’s capacity of 430 litres.

Cabin shots are yet to surface, but it's unlikely to be any different from the standard Creta other than the addition of a third row. Expect retained features such as a 10.25-inch touchscreen infotainment system with Apple CarPlay and Android Auto, BlueLink connected car tech, digital driver’s display, a Bose sound system, panoramic sunroof, ventilated front seats, and powered driver’s seat. Safety kit could include multiple airbags, front and rear parking sensors, electronic stability control, and a tyre pressure monitor.

Hyundai’s 7-seater Creta SUV may be launched around Q2 2021 at a premium of more than Rs 1 lakh over the standard Creta that retails from Rs 9.82 lakh to Rs 17.32 lakh (ex-showroom). The Creta 7-seater will go up against the entry-level variants of the Hector Plus as well as the upcoming Tata Safari and 2021 Mahindra XUV500.