Honda May Soon Offer Its Entire 500cc Lineup In India

Upcoming motorcycles could include a 500cc cruiser, streetfighter, supersport and an adventure tourer 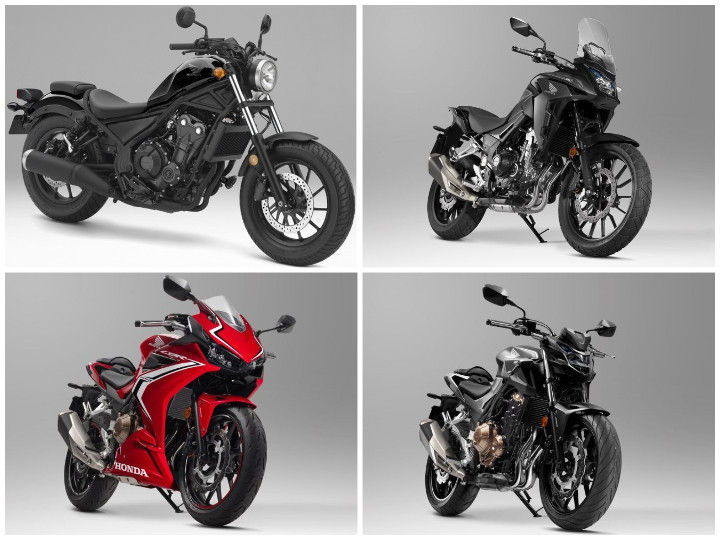 At the launch of the new Africa Twin today, Honda Motorcycle and Scooter India (HMSI) have revealed something really special for 2020. The company’s recent change in strategy involves offering bigger, more powerful bikes in India. This includes the existing Honda CB300R, the newly launched CRF1100L Africa Twin Adventure Sports, the CBR650R, CB1000R, and the Goldwing. We’ll soon have the 2020 CBR1000RR-R Fireblade too! If you pay close attention, there’s a sizable gap between the 300cc to 650cc range. Honda hopes to plug this gap with its entire 500cc lineup. And all of this is likely take place between December 2020 to February 2021. Expect Honda to bring these bikes via the CKD (Completely Knocked Down) route to keep costs in check.

Honda’s 500cc range is based on a single platform that caters to multiple genres at an accessible price tag. They include the CMX500 Rebel, CB500F, CBR500R, and the CB500X. The entire 500cc range was updated last year with a retuned engine and cosmetic updates. The Rebel is a cruiser, while the CB500F, CBR500R and CB500X are positioned as a streetfighter, supersport and adventure tourer, respectively.

In terms of powertrain, the CB500F, CBR500R and CB500X use the same 471cc, liquid-cooled, parallel-twin motor that makes 47.5PS of power and 43Nm of torque. According to Honda, the retuned engines make more power and torque in the mid-range (between 3000rpm-7000rpm). You can read more about all three bikes here.

The Rebel, on the other hand, makes 46.2PS of power and 43.3Nm of torque through the same 471cc motor. All four bikes features a assist-and-slipper clutch which negates wheel hops during aggressive downshifts and reduces clutch lever effort by 30 per cent. Click here for more details on the CMX500 Rebel.

That’s that for Honda’s 500cc lineup, but once you climb up the ladder, there’s the all-new CBR1000RR-R Fireblade and Fireblade SP that are set to arrive on our shores soon. The Fireblade finally joins the 200PS club, gets an all-new look with MotoGP-inspired aero winglets and it even packs top-spec components, too. What’s more? The standard bike weighs just 201kg (kerb)! Head here for the complete lowdown on Honda’s litre-class supersport.