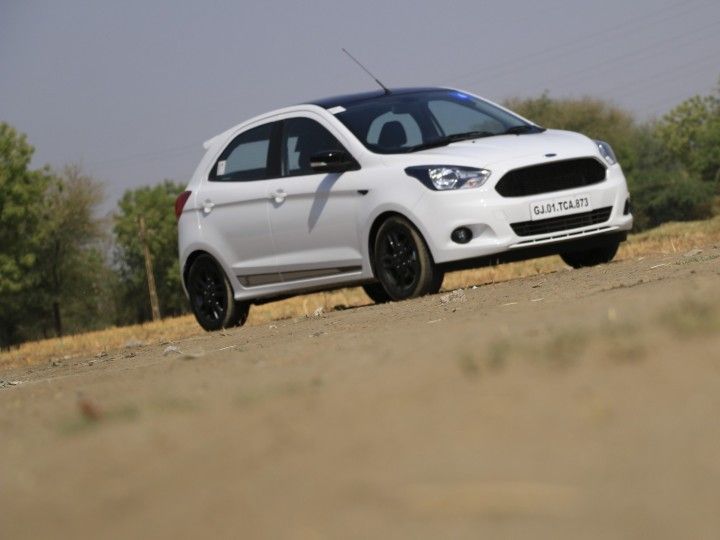 Starting with the most important factor - the mechanical changes. The Figo and Aspire get a revised suspension setup which should improve its handling and add a lot of sporty character to the drivability. From past experience, we know this formula works as Ford had earlier given a similar treatment to the Ford Fiesta S which made it a fantastic handler. Other than the stiffer suspension setup, the Sports variants get a lot of cosmetic updates as well.

Moving to the exterior, the most noticeable change is the all black grille in both the cars. The Figo loses its horizontal slats all together, making it look more aggressive whereas the Aspire now gets blacked out horizontal slats. The Figo also gets new, all-black 15-inch alloy wheels and a contrast roof, boot mounted spoiler and black ORVMs. The Aspire, on the other hand, gets new, silver-finish 15-inch alloy wheels but misses out on the dual tone colour scheme. Other changes which are constant in both cars are smoked headlamps, all-black interiors, leather wrapped steering wheel (with red stitching in Figo and gray stitching in Aspire) and side and rear decals with the 'S' badge.

Powering the cars are the same set of engines as before. The petrol engine is a 1.2-litre Ti-VCT mill which produces 88PS of peak power and 112Nm of max torque. This engine comes mated to a 5-speed manual transmission and in the S tune returns a fuel efficiency of 18.12kmpl for both the cars. The diesel engine is a 1.5-litre TDCi unit which churns out 100PS of max power and 215Nm of max torque. It comes mated to a 5-speed transmission as well but returns a mileage of 24.29kmpl for both the cars. Not to complain, but these changes would have been really appreciated on the 1.5-litre petrol AT as well.

All the changes made in the Sports variants are welcome and work towards enhancing the drivability and sporty character of the cars. The Ford Figo Sports will rival the likes of the Maruti Ignis and Hyundai grand i10 whereas the Aspire will rival the likes of Maruti Swift Dzire, Honda Amaze and Hyundai Xcent. We are driving the car as you are reading this and will soon be publishing a full review. Stay tuned.