Will be the German marque’s most powerful customer racing car 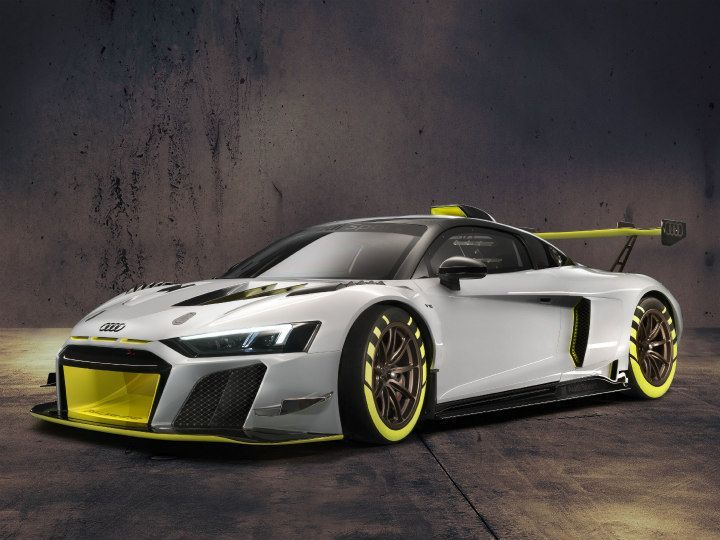 Audi Sport, the racing division of Audi, has unveiled a hardcore track-spec R8 LMS GT2 at the Goodwood Festival Of Speed in the UK. The R8 LMS GT2 will join the company’s racecar lineup alongside the R8 LMS GT3, R8 LMS GT4 and the RS3 LMS. It is based on the facelifted iteration of the road-going R8 but gets various track-spec modifications like aggressive bodywork, massive rear wing and a roof scoop.

The R8 LMS GT2 packs a punch as it retains the naturally-aspirated 5.2-litre V10 engine that powers the R8 road car. However the R8 LMS GT2’s power output is bumped up to a meaty 639PS of power and more than 550Nm of torque. This is also a good 55PS up from the GT3 model’s restricted 584PS of power, making it the most powerful customer racing car from the German marque. The R8 LMS GT2 is mated to a S tronic seven-speed dual-clutch transmission from the GT4, operated by steering-mounted paddle shifters.

Track-spec gains for the Audi R8 LMS GT2 aren’t just limited to pure engine power. The racecar has undergone a diet including carbon fibre inserts that make it weigh only 1,350 kg, which is 100kg lighter than the GT4-spec model. These power and weight alterations combined give the R8 LMS GT2 a power-to-weight ratio of 2.1kg/hp.

Changes on the chassis and aero side includes revised underfloor sections, a redesigned front splitter, and a different rear diffuser tailored to GT4 racing. Audi has also revised the suspension and braking components for weight reduction, adopting new hub carriers and wishbones along with front brake calipers from the GT3 and rear brake calipers from the GT4. The R8 LMS GT2 also gets driver aids like ABS, traction control and electronic stability control to make it more customer-friendly.

In terms of safety, Audi has made several optimisations including a sturdy driver seat, a six-point harness in accordance with FIA standard, safety nets on either side, a fire extinguisher, a roof-mounted rescue hatch, and a rear-view camera. Its doors are made out of a carbon-fibre construction combined with CFRP-AFRP side impact protection inserts with aluminium honeycomb that has been mandatory since 2019.

The R8 LMS GT2 will compete at next year’s inaugural GT2 class of the Stéphane Ratel Organisation (SRO). It will be offered at a base price tag of 380,000 dollars (Rs 2.60 crore) and customer deliveries will start around the end of this year.