The Swift facelift gets dual-tone variants for the first time at a premium of Rs 14,000 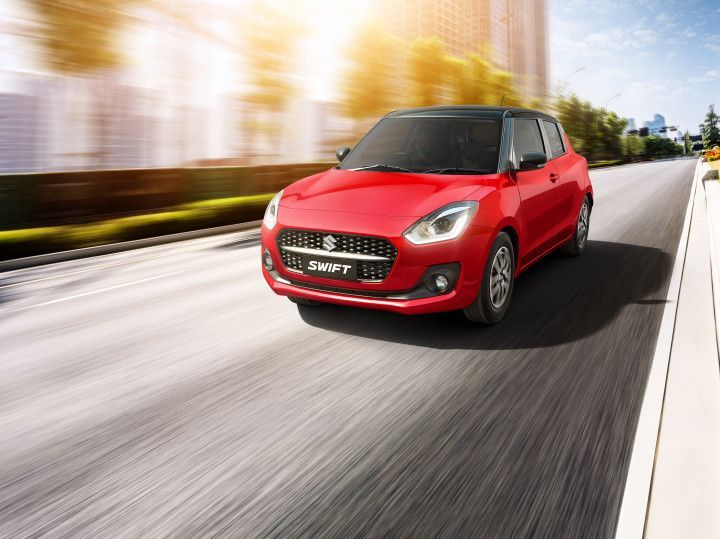 Maruti Suzuki has launched the facelifted Swift in India from Rs 5.73 lakh to Rs 8.41 lakh (ex-showroom). It gets a slightly more powerful K-Series 1.2-litre DualJet petrol engine, borrowed from the Dzire and Baleno, with manual and AMT transmission options. In addition to the four variants (LXI, VXI, ZXI, ZXI+) that were on offer before, the facelifted Swift gets a new dual-tone option based on the range-topping variant, at a premium of Rs 14,000. Here’s a detailed look at the new pricing:

With this facelift, the Swift sees only one noticeable update in its design: a new honeycomb mesh grille with a chrome strip in between. Inside, it gets new features such as cruise control, idle start-stop, and auto-foldable ORVMs. It also gets a new 4.2-inch TFT driver’s display borrowed from the Baleno. Safety is covered by dual airbags, ABS with EBD, rear parking sensors, rear parking camera, ISOFIX, and seatbelt reminder in the front seats. The Swift’s AMT variants also come equipped with new safety features such as electronic stability control (ESC) and hill-hold function as standard.

Under the hood lies the more powerful 1.2-litre DualJet petrol engine, borrowed from the Dzire and Baleno. The engine puts out 90PS (7PS more than its predecessor) and offers a claimed efficiency of 23.20kmpl (MT) and 23.76kmpl (AMT), an improvement of around 3kmpl.

The new Swift rekindles its rivalry with the Hyundai Grand i10 Nios, Ford Figo, and Renault Triber.