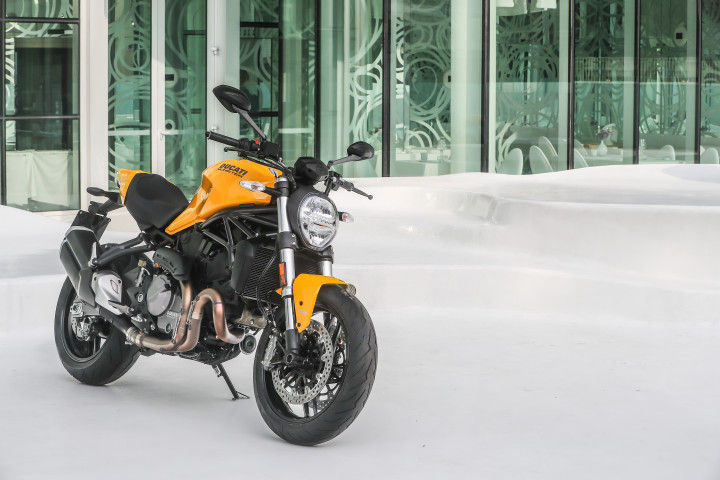 Ducati’s been working on revamping its model lineup for the upcoming year as evident by the new Multistrada V4 that was spotted testing a couple of days ago. Following suit is the all-new Ducati Monster which has been spotted doing rounds in Germany. From the looks of it, the bike features several changes including an all-new frame and swingarm design. We believe the test mule is most likely to be the Monster 821, which is among the more popular models in Ducati’s lineup.

One of the most distinctive features on the Monster is its trellis frame. But, the bike seems to ditch the framework for a more traditional cast aluminium chassis which uses the motor as a stressed member. The bike even looks sleeker than before and uses a new subframe design which may make more room for the pillion rider. The chunky swingarm on the current-gen Monster makes way for a new slimmer unit which may help shed some weight. The test mule seems to be using a different set of alloy wheels which could either hint at a new wheel design or simply be used for testing.

A closer look reveals the exhaust design with two stubby end cans. While it looks a bit unfinished, it gives us an idea of what the finished product could look like. The new exhaust design could further reduce the weight of the bike.

The updated motor will feature lighter mechanicals and comply with both Euro 5/BS6 emission norms. It’s likely to retain the same performance as before. For reference, the current-gen Monster 821 liquid-cooled L-Twin motor makes 109PS and 86Nm. The bike already comes with different riding modes, power modes, and Ducati Safety Pack which includes ABS from Bosch and Ducati Traction Control (DTC). Expect the upcoming model to come with IMU-based traction control and cornering ABS.

The 2021 Monster seems to retain the same hardware as before. The headlight design isn’t quite visible from the side view but we could expect to see new LED internals. The tail light, on the other hand, has been redesigned. We believe the ergonomics on the 2021 model could be more upright courtesy of what looks like a taller handlebar.

The new Ducati Monster may be unveiled at the Ducati World Premiere 2020 followed by an India launch in 2021. Expect the new model to garner a premium over the current Ducati Monster 821, which retails at Rs 10.99 lakh ex-showroom. It'll compete against the likes of the Triumph Street Triple R, KTM 790 Duke, BMW F 900 R, Kawasaki Z900, and the upcoming Harley-Davidson Bronx.