Most Powerful Ducati Goes Into Production 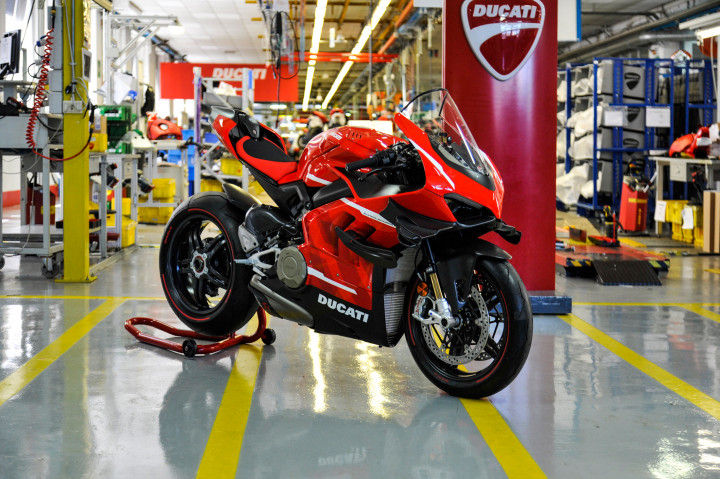 A few days back, Ducati launched the new Hypermotard 950 RVE in Europe. Now, the Italian brand has announced that the first unit of the extreme Superleggera V4 has rolled out of its production line in Borgo Panigale. For the uninitiated, the Superleggera V4 is the most powerful, extreme and quickest production bike from Ducati. It’s also among the most expensive motorcycles on sale in the world at £90,000 (Rs 85 lakh) in Europe!

Superlegerra in Italian means lightweight and Ducati has taken it quite seriously as the new bike weighs just 152.2kg (dry weight) with the racing kit, which is almost 23kg lighter than the standard Ducati Panigale V4! Mind you, the standard V4 is among the lightest production superbikes in the world.

Fun Fact - Ducati Will Treat You Like Royalty
Every Superleggera V4 owner will get a chance to ride the Panigale V4 R that takes part in the SBK World Championship on track at Mugello. Thirty owners also can purchase the ‘MotoGP Experience’ and get to ride the Desmosedici GP on a race track! All 500 owners will also be presented a 1:10 scale model of the bike.

The Italian brand managed it by using carbon fibre on the frame, swingarm, wheels and body panels, while aluminium, magnesium and titanium have been used extensively to keep the weight in check. Apart from being featherweight, the Superleggera V4 also features the most powerful engine from Ducati. With the race kit, the 998cc V4 motor belts out 234PS and 119Nm of peak torque. Ducati claims the Superlegerra has the best power-to-weight ratio for any production bike on sale.

Also read: Fabio Taglioni, The Father Of The Ducati Desmo

It also features biplane winglets as seen on Ducati’s MotoGP machines and the brand claims it produces almost 50kg of downforce at 270kmph! The winglets help with anti-wheelie characteristics when accelerating hard out of corners besides giving the bike a meaner look. As expected, the Ducati V4 Superlegerra gets loaded with top-shelf components and a myriad of electronic aids. You can read in detail about the bike here - Ducati Pushes The Envelope With Its 2020 Superleggera V4

The Ducati 1299 Superleggera was sold in India for a whopping Rs 1.12 crore (ex-showroom) and it remains the most expensive motorcycle to be sold in our country. It will be interesting to see whether the Ducati Superleggera V4 will find any takers given the current economy due to the COVID-19 pandemic.