Here Are The Leaked Images Of The 2020 Maruti Suzuki Swift 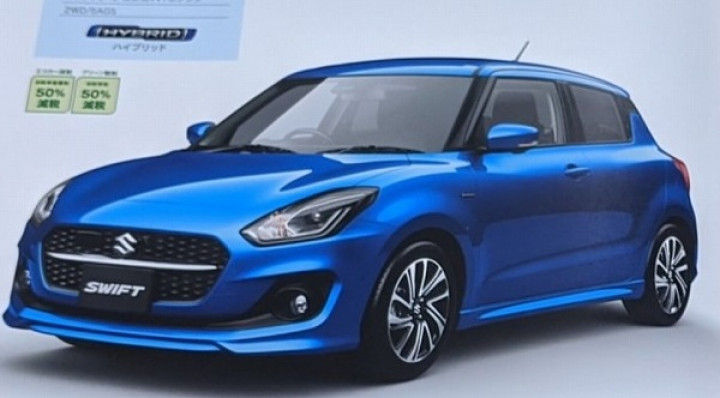 Time flies. The fourth generation Swift came four years ago in 2016. So it is no surprise that the hatchback is all set for a mid-life update to keep it relevant in the face of emerging competition. A set of leaked brochure images, most probably from Japan, have revealed what the 2020 Maruti Suzuki Swift facelift will look like. It also shows all the colour options that will be available on the updated model.

The most prominent change up front is the new honeycomb mesh grille with a chrome strip. The bumper gets small updates as well but the rest of the hatchback looks more or less the same from the front. Also new are dual-tone alloy wheels and side skirts. Since we don’t have images of the rear end, it’s impossible to pinpoint the changes. The desirable Swift Sport is also expected to gain some changes like the standard model.

We haven’t got our hands on the cabin images either, but expect some minor changes along with the addition of the 7.0-inch SmartPlay infotainment system. There could be some feature additions like connected car technology as well. The brochure also shows the seven colour options that will be available in the updated model. These include two new shades: gold and orange.

The India-spec Swift is currently powered by a  BS6-compliant 1.2-litre K12B petrol engine that develops 83PS of power and 113Nm of torque. Transmission options include a 5-speed manual gearbox and 5-speed AMT. The facelifted model could also get the 1.2-litre DualJet petrol engine that’s offered in the Baleno. This unit makes 90PS and 113Nm. Maruti Suzuki has discontinued the 1.3-litre diesel engine as it doesn’t comply with the BS6 emission norms.

The brochure also reveals a hybrid logo. Maruti Suzuki showcased the Swift Hybrid in India at Auto Expo 2020. It packed the standard 1.2-litre petrol motor along with a 48V mild hybrid system. The Swift Hybrid puts out 105PS and 148Nm. That said, it remains to be seen whether Maruti Suzuki will offer this version in India.

Rivalling the Hyundai Grand i10 Nios and the Ford Figo, the Maruti Suzuki Swift retails from Rs 5.19 lakh to Rs 8.02 lakh. The facelift is expected to be unveiled globally very soon. The changes on the Japanese model could trickle down to the Indian version since its rivals are already ahead of the game in our domestic market.