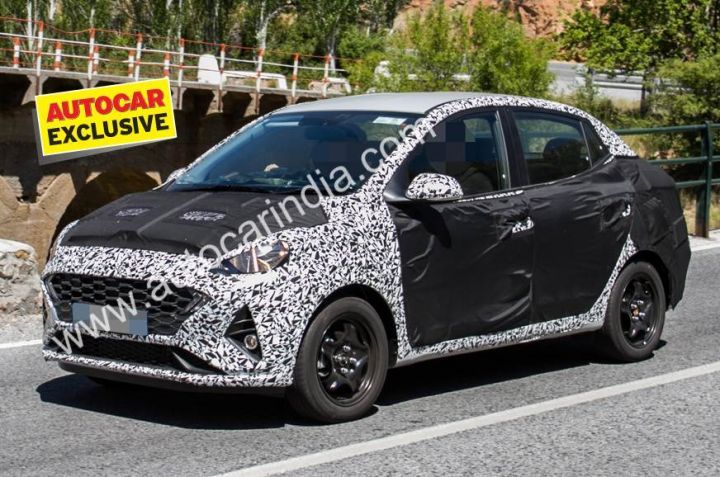 The spy shots reveal that the styling of the Xcent facelift is more of an evolution as the basic silhouette is almost the same. Dominating the front is Hyundai’s cascading grille that’s now bigger and features honeycomb inserts. The headlamps now look sharper and the fog lamps which are projector units, are placed in a triangular housing just like recent Hyundai sedans. In profile, the Xcent facelift looks almost the same as the current model. The spied test mule was not a sub-4 metre sedan as European markets do not have that restriction, but it will tuck under the 4m mark when launched here. At the rear, the Xcent facelift gets LED tail lamps. The number plate has also been moved to the rear bumper a la the Ford Aspire.

The interiors of the Xcent are still under wraps. But we expect it to be largely similar to the next-gen Grand i10 that has been spied on our roads. The Xcent is also expected to feature the floating infotainment system seen in the Venue. Expect new features like Apple CarPlay and Android Auto for the infotainment, a few features of the Blue Link connected tech from the Venue and cruise control in the new Xcent too.

Under the hood, the 2020 Xcent is likely to carry forward the pair of 1.2-litre diesel and petrol engines, albeit upgraded to meet the upcoming BS6 emission norms. The petrol engine produces 83PS and 114Nm, while the diesel churns out 75PS and 190Nm. While both the engines come mated to a 5-speed MT, the 4-speed torque converter AT in the petrol might be ditched in favour of the 5-speed AMT from the Santro, as AMTs are more cost efficient. It remains to be seen whether Hyundai introduces a CNG variant of the new-gen model.

The next-gen Xcent is expected to debut at the 2020 Auto Expo and will most likely hit roads soon after that. It is also expected to be priced slightly more than the current sedan because of the new platform and BS6-compliant engines. Prices for the current sedan start from Rs 5.72 lakh and go up to Rs 8.77 lakh (ex-showroom Delhi). The Xcent rivals the likes of the Ford Aspire, Maruti Suzuki Dzire and the Honda Amaze.

BREAKING: The Hyundai Xcent Is Set To Get A...