Is the new Hyundai Xcent facelift better than the model it replaces? 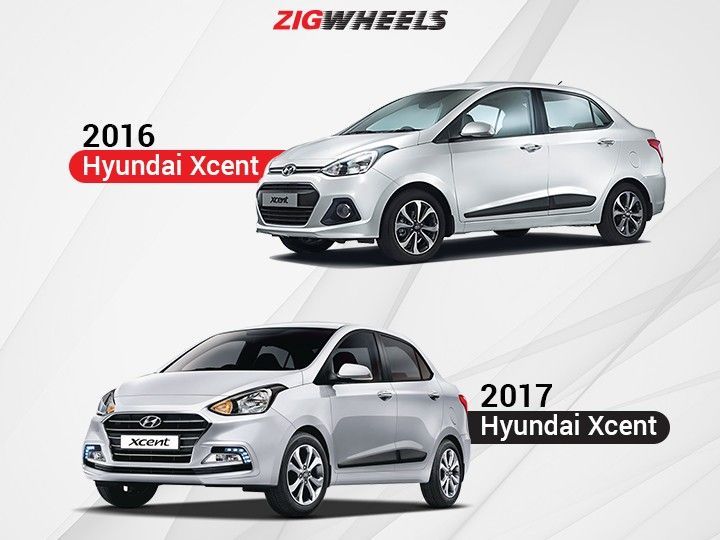 Hyundai has had to refresh the Xcent sub 4-metre compact sedan within three years of launching the original model thanks to increasing competition (read upcoming Maruti Suzuki Dzire) and higher customer expectations. The new Hyundai Xcent does have many features which make it a compelling buy, but how much better is the new Xcent as compared to the older model? We find out.

As you can see, the new Xcent has the exact dimensions as the model it replaces. The redesigned bumpers have not resulted in an increase in overall length, and because this is essentially a facelift - the wheelbase, width and height remain the same too. The new Xcent gets the same steel/alloy wheel options as the older car, but the 14-inch alloy wheel design on the new car is new and is reminiscent of the alloy wheel designs first seen on the 2014 Honda City.

The petrol variants of the new Xcent continue to be powered by the same 1.2-litre, 4-cylinder 'Kappa' motor developing 83PS of maximum power and 114Nm of peak torque. The Xcent petrol can be had either with a 5-speed manual transmission or a 4-speed torque converter automatic transmission. Though the mechanicals remains the same, the new Xcent is fitted with an alternator management system (AMS) and a new front-wheel air-curtain device which has helped improve the mileage. The petrol MT variants are now 1.04kmpl more efficient, while the petrol AT variant return 1.26kmpl more!

The Xcent gets a new diesel motor as compared to before. The 1.1-litre, U2 CRDi motor has been tweaked to increase its displacement to 1.2-litres, the number of cylinders remains the same. The maximum power developed has gone up by 3PS to 75PS, while peak torque developed has gone up by 10Nm to 190Nm. The slightly higher displacement, increased power and torque, the AMS and the improved aerodynamics have also made the new Xcent diesel more efficient than before - by 1kmpl.

The Hyundai Xcent facelift now gets an additional variant, the 'E+', this sits above the base 'E' variant. New equipment added to the Xcent facelift include LED DRLs on the front bumper, a 7-inch touchscreen infotainment system with smartphone connectivity, a shark fin radio antenna, and an alternator management system. New standard equipment includes dual front airbags and an Alternator Management System (AMS).

While the base variant of the Xcent facelift is more affordable, this has come at a price. Hyundai has removed full-wheel covers, blacked-out B-pillars, the passenger-side vanity mirror, the digital clock, rear-seat armrest, a day/night IRVM and central locking to make the new Xcent as affordable as it is. ABS, which was earlier offered as standard across all variant of the Xcent is now only offered on the top-of-the-line SX and SX (O) variants.

Depending on how you look at it the new Xcent is better or worse compared to the pre-facelift model. Removing ABS from the standard equipment list is certainly not a great move, but the Xcent now look significantly different from the Grand i10 and the new diesel motor makes the car peppier to drive.